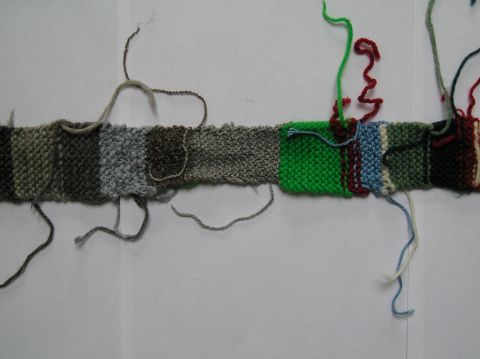 Thank you Franny, Annie, Rob for your supportive comments.

I’m still feeling the loss of the work a lot – yes, it feels very strange when I’m waiting for a bus with no activity to mark that time. I’ve thought about starting the project again with some new activity, but I really want my knitting back! One of the difficulties of making something out of the loss is that the notebook that had all the record of the work was in the bag that was taken. So anything that comes out of it has to do with memory and imagination.

I suppose one interesting (?) aspect of this (although it’s still so recent I’m finding it hard to find it ‘interesting’) is that as a performance artist, I’ve always had a bit of an ambivalent relationship with objects that I make through the knitting performances – since I see the essence of my work as being ephemeral. In a way the vanishing object is I suppose a reflection of that – though not one I would have wanted.

So I’m still reeling… I talked about the loss of my work at my artists’ group the other night, realised it’s a bit soon to be thinking about ways to take it on because i still have a strong feeling of wanting that work to be here, now.

And then today, thinking about a ‘farewell’ performance of some kind, I started a list of possible alternative fates for the work – it got dumped in a bin and is now in landfill, birds used it for their nests, somebody picked it up to continue the project, somebody is wearing it as a scarf… in parallel universes all this is happening. 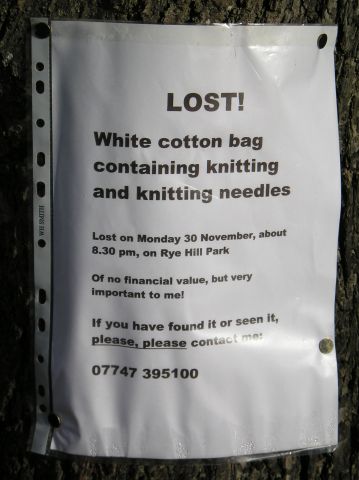 The end? The beginning?

In a way I’m starting this blog at the end. Since the beginning of March this year, I’ve been engaged on a year-long project called “A Year of Waiting”, where I aim to collect up and mark all the time I spend waiting for public transport. Each time I wait for public transport, I knit, adding to a long, narrow strip that gradually increases in length with the accumulation of waiting time through the year. I change colour each time, so that each individual block marks one waiting time, ranging from a narrow couple of rows for a 2-minute wait for a tube to a lengthy piece marking the half-hour (or more) waited for a night bus… On each occasion, I also note down where I am waiting, the means of transport, my destination for this particular part of my journey, and the time. My plan is (was) to display the piece when finished with these annotations, contrasting the visual representation of time with the precision of numbers and detail. The piece was to have been finished on 28 February 2010.

On Monday 30 November, at approximately 8.30 pm, the bag containing the knitting and the accompanying notebook disappeared from my bag in the short walk from the bus stop to my home. It’s possible that it dropped out of my bag, but circumstances lead me to think that it may have been taken (there was someone walking very close behind me at one point). Of course, the bag would have had no value (that I can think of) to them. So I have checked with the bus company, phoned the council cleaning department to find out if it has been picked up by street cleaners after being dumped, and put up posters in my road asking people to contact me if they’ve seen it. So far, nothing…

My question now is what to do about all this. I am really quite devastated by this loss – what started as a small project really grew and became important to me over the year, and I was looking forward to completing it and working on ways of showing it. Part of me wants to restart the piece straight away, but I know it won’t feel the same. I have tentatively begun thinking about making a performance about the loss, which would not replace it but might at least mark it in some way. It’s early days, I know, since it happened, and there is (I hope) still a possibility that it might be returned (in the meantime I’m still keeping records of my waiting…) But I feel a need to do something with/about this.

Does anyone else have similar experiences? All commiserations and suggestions welcome… 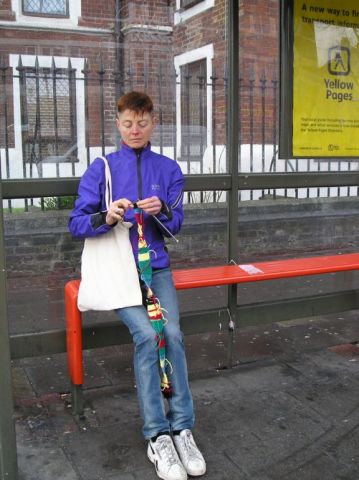