We as a group decided to trial a continual walk film which turned out to be very difficult, the slight wrong move and a shot was ruined. This is a whole new aspect to learn/work with how to document my work.

Reflection 23/02/21: This didn’t work for the film, we ended up splitting it up and adding stills to gather a better scope of the space/work. We all agreed this as a group it was much more effective.

I’ve learnt that experimentation helps me decide on what works best. I wanted a more open view of the kitchen, having to walk around the back of the island to get to the right ‘view point’, like when you’re at the cinema finding your seat. Also get a personal touch of the artists living environment. Below in the experimental films there were a few issues/obstacles I had to over come: wobbliness, centralising the film, proportional, focus and paying attention to where you’re going in the dark.

Started in the hallway – stair lights on, living room light on, created a lived in feel before you enter the dark space. It’s said from a peer that it feels like you are intruding. See below.

Too many lights on at this point – I kept the stair lights on as they add a welcoming light into the hallway. It’s aspects of the film like this that I struggled with at first.

Reflection 29/01/21: Working with lights on as I enter instead in the actual kitchen space allowed me to be dramatic/draw more attention to the projection as soon as the lights are off. It creates a whole new ambiance to the work and the space.

I then started from outside the front door up close and walk in to practice the angles of the door as well as opening the door.

I moved further back down the drive and get a feel for the whole of the front door and house, as there was the possibility of my film being first due to being the kitchen. Moving outside there’s more elements to consider, e.g. light, darkness, the weather and noise. Noise is something I was worried about in this film, as with my photos of my projection, there is no noise present. For this film, I had to ask my family to go for a walk as these are other obstacles which were hard as usually I would be at uni.

Reflection 23/02/21: There was a mass amount of experimenting for this exhibition and lots of circles, stops and stresses as it has been very difficult creating work with the rest of your class virtually, but it worked once we all had a plan. This exhibition has taught me to not be so precious over my work/films as there’s bound to be changes throughout when working with others to see what works as a whole.

Outside lamp – appeared better off, more impactful as you open the main door. See still outside images below. When it’s off you can’t see as much of the house except the glass front with the warm of light coming through the windows, again suggests it’s a lived in space I liked this. 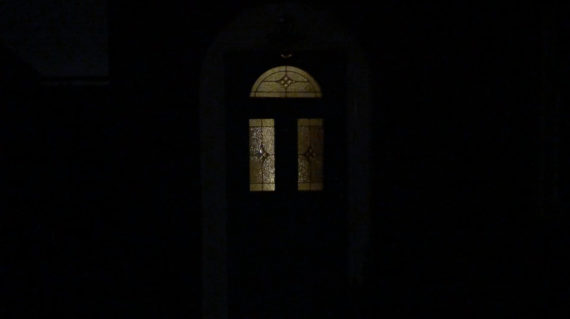 I tried the lamp on so you could see more of the house, but my shadow takes away from the attention away from the hallway/space as I walk. See below, it’s a more successful viewpoint of the house, but not a practical one. The weather was also very loud, it adds to the sound/lived in space alongside the foot steps – changing from stones, hallway to the kitchen tiles.

Reflection 23/02/21: The film worked well being dark – created a creepy but intriguing approach to the opening of the film, played well with the flow from dark to light – through the film.

Reflection 06/04/21: This is an element I have come to with my practice now in Sweet Tooth B&W, it didn’t mean to have a scary aspect to it but this is a comment which keeps popping up throughout my work.

Shoes – different noises happen when you have shoes on, they’re louder and more distracting. I had to think about what to wear outside and if they were easily to slip off when I then come inside. It was a hard transition of taking the shoes off as I walk without the film being cut or wobbly. The change in footsteps from inside to outside worked well from a group meeting 01/02/21, not too over powering/adds to the feeling of moving into someones home. I kept the camera eye level for the viewers as though they are experiencing it.

Reflection 27/01/21: I recently had a group meeting with my team and a 1-1 about the filming/content of this film, it has a good start to work from however, there’s was issues about the darkness of the film (being filmed at night) and if that would play an effect with those others who are filming during the day. Personally I don’t think so, it will add to the individuality of each other’s work/space.

I’ve seemed to come round in a circle with this exhibition and going back to what I first did originally – working with stills. They are so much more vibrant and will be something I will work on this weekend.

Reflection 06/04/21: We adapted to the use of dark/light environment and created a continual flow in the house (first part – downstairs was dark) and we finished on light (the upstairs was light).