I’m travelling on the tube, body to body, wondering how I might take photos of some of the people around me, that is, so that I might draw them later. Shall I just explain that I’m an artist and see what happens? Any request of a particular individual will likely be overheard, making me self-conscious in the asking. Plus, once I’ve asked, they will, like-as-not, become self conscious in themselves and more prone to pose – which is not what I’m after. I always like to be able to ask someones permission before drawing their likeness; and/or to ask permission of the photographer of a persons image in the hope that they gained first person permission. I once read that the Masai warriors in Africa believe if someone takes a photograph of one of them without their permission (and then goes away with it) they will have stolen their soul. They are, apparently prepared to sell their image/soul, for if money changes hands it’s said to be a different matter. But still I feel sympathy for that idea. Of course it’s a very interesting and intimate process studying someones face as hard as is neccessary to draw it well. I believe that the longer you look at something the more you look beyond and through to what’s inside. Currently I’m in London alot, travelling back and forth to the gallery and seeing a fascinating face that I’d like to reproduce on the page, almost every time. Can I take a sneaky picture? What are the ethics involved in that?

So, it’s the first official week of my residency at The Muse gallery/studio, Portobello road, London. The gallery is open Wednesday – Saturday each week + Sundays during this period, whilst our group show is on the walls. I had been due to be working alone, manning the show, today. It would have been my first day in the studio. Instead, having fallen on my back on the ice outside, I’m sitting at home amidst the tangled edges of my trains of thoughts, aching all over, somewhat frustrated. Also because I have 4 drawings currently begun, yet am unable to see their endings and therefore to finish them. Their beginnings seem poignant but…

The endless stream of my thoughts is backing up regarding my objectives in respect of all the drawing I’m trying to do.

During the Renaissance in the North of Europe artists employed a technique called Disguised Symbolism. Essentially this referred to the employment of allegorical iconography, that is, the placement of specific objects within paintings meant as allegorical metaphors. Fruit, for example, symbolized material and biological wealth (fruitfulness). A dog in a painting was the disguised symbol of loyalty. An old man with a beard, wings and an hourglass would be representative of the concept of time. Personifications were always attributed the gender of the word they represented, so personifications of time were always masculine because the word time (tempus) is.

Whilst works of art by, for example, the Abstract Expressionists primarily plan to project and provoke emotion, art that employs Disguised Symbolism is meant to be read like a book. In order to relate fully to such a work one needs to understand that every example of it (in every museum in the world) is in code. One must then learn how to read the language of that code.

I’m endeavouring to infiltrate a similar dynamic, of hiding/revealing, into my work.

Paper Garments: In a museum in Istanbul I saw a kaftan worn by a Sultan that was made of paper and seemed to have been decorated with mathematical and seemingly mysterious script, geometry and text. I was struck by it, quite fascinated. A commentator has written that one example of such a vestment had on it: “Verses from the Quran as well as prayers. It was worn not to get magical effects but…as a form of worship to put the mind in a particular mode of devotion. It was worn particularly in times of battle…to have control over ones own mind by not committing excessive acts… forbidden by the very words inscribed in the shirt one wore.

Our clothes form a physical layer between our inner and outer worlds. Sometimes clothing acts as a veil, sometimes a suggestion, sometimes a statement and sometimes a disguise. One side of any cloth we place around ourselves, living or dead, touches our inner vulnerability and the other is exposed to outer scrutiny. I’m interested in representing the ephemeral qualities of human beings, their religious/spiritual ideas, their memories, thoughts, feelings, visual impressions, ideas and imaginings. I see people as layered, collated, collaged and constructed works of art and am interested in drawing attention to this idea. I believe we each “wear” (that is, in some way display) personally collaged narratives around ourselves. Sometimes these are formed consciously and sometimes we exhibit previously hidden layers of our unconscious impressions but either way, like auras or second skins, they can be read by others. This externalized layer of narrative impression then influences and stimulates narrative in return. Working with paper, rather than with cloth, offers the garment up even more specifically as a canvas for drawing and script. With the placement of words and images on the surface of the garments I can direct a viewer’s judgments. It also transmutes our everyday treatment of paper (usually an ignored background surface).

There’s something of the hospital gown about the simplicity of the shape of the paper kaftan. I hope that this correspondence and the fragile medium suggest the fragility of both the emotional psyche being portrayed and the physical body one might find inside such a garment. Since finishing my MA in Cosmology my work as an artist has reflected my study of the metaphysical philosophies of ancient and modern man more than ever. The aura, Buddhist ideas such as Karma and the Daoist belief that we each have eight energetic bodily layers of ever increasing subtlety have been areas of particular focus; as have the practices of inner alchemy and mindfulness (both of which encourage the dissolving of psychological imagery). Stylistically my influences have also included: Stained-glass, the Persian and Indian miniature traditions, Illuminated manuscripts and maps, Icons and Calligraphy. 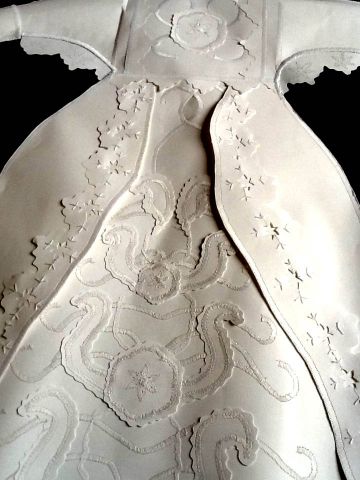 Drawing: After training in Decorative Arts my practice as an artist has been for many years primarily concerned with stained-glass, glass applique and kiln-formed glass sculpture. In this way I’ve educated my eye in respect of pattern, geometry and colour whilst nurturing an ever increasing personal fascination with the concept of translucency. I’ve always looked, literally, through my primary medium. But I began, recently, to find within myself the need to step back somewhat, to consider figurative detail and surface/external impression; if only in order to locate the bridge between the two realms that are translucency-opacity and/or inner-outer.

I believe in the discipline of drawing and am delighted to have returned to the primary practice of my childhood. My style as a fine artist is definitely and purposefully now informed by that background as well as by inspiration gained through my academic post-graduate study of spiritual and philosophical thought. I’m beginning to understand the work of the (visual) artist as visual philosophy; ie. looking so deeply at that which is external to oneself that eventually you start to see some way into and through it. I hope that something of this will come across as I begin to explore and develop a new way of working, a new practise, using paper; exploring portraiture and dress. I anticipate one or other of these two areas of focus will come to the fore at some stage during this year and thereafter, but that symbolism will remain always. 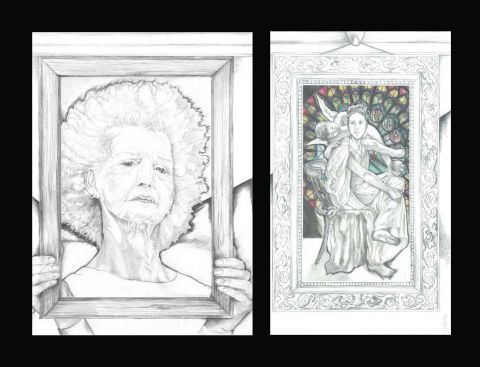