So, it’s the last month of the studio space/working access part of my residency. The solo shows of the 4 Muse Gallery a.i.r’s start next month. Mine will be from the 21st Nov-8th Dec.

It’s tough to know whether you’ve interacted with any experience as fully and effectively as you might have wished to, especially when there’s no visible president available; the artists who’ve gone before me re. this position, seem largely invisible.

Certainly the few people I’ve met with in the venue (from all walks of life) I’ve striven to be as open with as feasible. As I’ve already said on here by nature I’m an artist’s garret type, a loner. I can get lost in the world of recorded stories/books which I listen too whilst drawing + the processes of my own thinking. Nevertheless of course I will want as many people as possible to see the exhibition.

Certainly I know now that after drawing imagery from inside myself at home I can then bring it in to be worked upon whilst others are around; and I don’t believe that the end result of this appears mechanical. Besides there must be mechanical aspects as regards the production of any creative work and in themselves they can be engaging and surprising as well as alienating. Sometimes something mechanical helps those who would be engaged to recognise themselves in the process, life is full of necessarily mechanical moments.

Proust described the visual artist as a visual philosopher and it’s important, I believe, that any artist’s audience gain a sense of this whenever possible. If only so that the full spectrum of art’s potential is of evident to as many people as possible. Also that art itself is not limited by outer perceptions/preconceptions of its purpose/ambition. Certainly some of the discussions I’ve had with visitors have seemed to intrigue them and have intrigued me. Now the build up begins for my solo show; hopefully the work itself will speak effectively and with confidence. Thus I begin seriously to seek to encourage interest, to consider gallery representation and to work toward sales. As well, of course, as just keeping on making work!

I am grateful to inspiration (the muse/my muse) for my progress so far. My drawings and ideas are changing/growing and running well ahead of the speed at which I can produce work, but that’s all to the good I’m sure. This drawing shows the image of an American woman poet who I read an article about in a national newspaper at the start of the year. Finally I have gotten around to imaging her beautiful face but I need to do more with this image. I can’t draw a poetess and not incorporate words somewhere in the image. The idea of visual symbolism also however, needs again to come to the fore now. I have it in mind to incorporate (in the area of the aura of her person) a pattern of sorts. Inspired in this instance by characters found in cave paintings. As I progress I’m searching out ways to effectively incorporate animals and beings found in other ancient art forms and myth. Surely the language of the (creative) spirit is indeed ancient/prehistoric and mythical. Surely the imagery of the landscape of the subconscious overlaps that of the imagination and surely universal imagery roams across and recognises no borders. I’ve looked at the symbolic imagery of the history of Western art and found not only secular references but more often than not Christian ones. These alone, are alienating to as many contemporary people as they are inclusive of them. Pre-Christian imagery, cave paintings, in comparison are universal and still haunt most people’s imaginations. I therefore have open to me a whole raft of visual references, a whole world of spiritual imagery and I mean to plunder it, better to demonstrate the light and dark of the underworld of the buried impressions which float in the ether around each and every one of us. 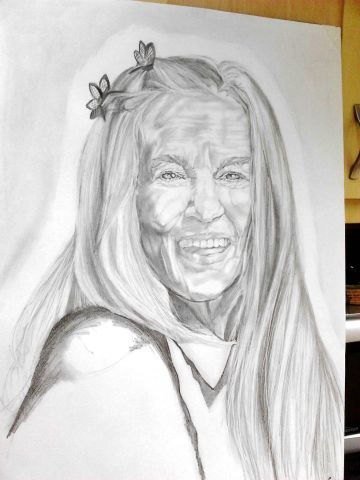 So now to a work of filigree, of fine paper cutting, as I work on the third garment of the series “…bloody Women…!” The white (slightly sheer) over-dress of this piece will be longer than any others I’ve done, the red under-dress will be shorter and more opaque. The piece is to be called White Queen/Red Devil. 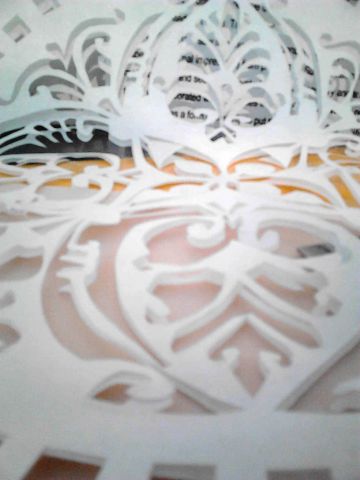 I anticipated my drawing of a female model would be life-size, perhaps just over 6ft tall. In fact it will stand just over 8ft tall. This means that the young girl by her side will be almost my height and the baby shown sitting at their feet will also be larger than life-size. This is necessary for the final show where they’ll be seen standing against the far wall. I’m struggling however with what word/wording to write on the vest top of each. I’m exploring French and English but haven’t quite hit upon what I want; something that sums up the influence of adults/individuals over children/others, subtle as well as obvious as it is. Something that suggests how it spreads/can be inherited. They are each to be wearing their own version of the same outfit, the wording (when I decide upon) will vary only slightly the look of each.

An area of fashion I must surely examine in the future is that of uniforms. In comparison to the unique quality of each piece I’ve made so far, not just regarding the detailing (text and imagery) but also the style/look/colour etc, I’m intrigued to explore the effect of a range of paper garments made to look exactly alike. Each piece apparently the same as the next and yet…on closer inspection each giving away specific qualities of the individual who might wear it.

Surely if they were to be a series they’d vary in size and some would show distinct, if slight, physical tweaks (such as when certain school girls hitch up their skirts to a length shorter than the standarad or add a personal appendage to try to demonstrate their rebellion/ personality).

If, however, in the case of the paper garment, the exact details of the individual inhabitants psyche (thoughts/impressions etc) were written/drawn on and over/across the surface of each piece what then would closer inspection reveal the differences to be?

I’d like to link to a particular organisation in order to explore these ideas further.