Following the first of three workshops in the 2017-18 a-n Writer Development Programme, the participants were asked to write an 800-word piece informed by seeing the current show at the gallery: Kim Yong-Ik’s ‘I Believe My Works Are Still Valid’.

As part of the task, they were asked to include a direct quote from the artist, a quote about Kim’s work from another source, and also biographical information about the artist.

All the pieces will be posted on this blog, starting with Edinburgh-based artist and writer Jessica Ramm. 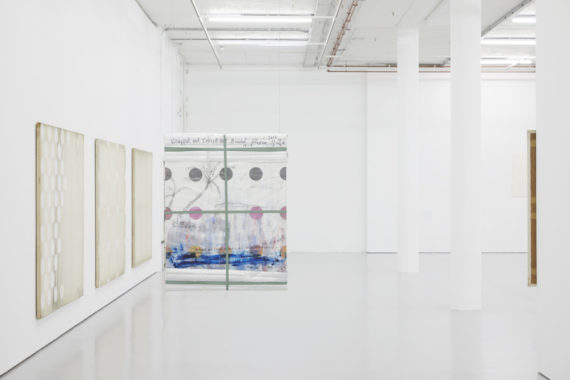 Born in 1947 in Seoul, South Korea while the country was under U.S. administration, Kim Yong-Ik’s personal biography coincides with the birth of one of the most politically turbulent and rapidly advancing technological nations in the world. The prolific use of packing materials in his current exhibition at Spike Island, suggests that his works are on the move as part of a larger ongoing process; there are tapes that bind, wood that cradles and sheets of translucent plastic that enclose hidden baggage.

Many of Kim’s biographers refer back to the earliest stages of his artistic development: an origin myth of sorts. He began exhibiting in the mid-1970s with work influenced by the Korean monochrome painting movement, Dansaekhwa. This work proved so successful that, as stated in the exhibition guide for ‘I Believe My Works Are Still Valid’, he was ‘lauded as the natural heir to the older generation of Korean Modernists.’ The construction techniques Kim has used since, such as painting over earlier works with cloudy washes of pigment, suggest that this heritage is not something that he wishes to take ownership of. His decision to go on working and reworking material from this period indicates that unburdening himself of this bestowed legacy is complicated, since it constitutes part of his identity.

His work Ksitigarbha-2 (1992-2015) functions as a wooden coffin-come-packing-crate in which he has placed work from this early period of his career, making preparations for it to be accompanied by a traditional Buddhist deity on its journey to the next life. Kim’s ambivalent relationship with his heritage is something that is no doubt shared by many contemporary Koreans who balance the combined pressures of living in a high-tech society that still holds traditional conservative values.

Success, or the recognition of one’s work, is a theme that often causes doubt and anxiety for artists. Enveloped in the possibility of success is the risk that one’s work might be corrupted or its vitality destroyed. Kim’s approach to tackling this issue recalls Balzac’s fable of a master painter who struggles for years to reproduce the likeness of a beautiful woman, only to arrive at a mess of splodges and scribbles from which a single perfect foot emerges. 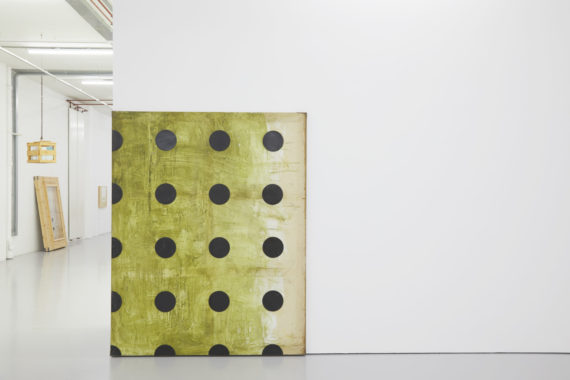 Perhaps it’s this impossible predicament of representation that Kim refers to when he says that he “discovered the limitations of Dansaekhwa art that lingered in its self-confining circuit.” Cannibalising pieces from his modernist period, he layers them up, paints over them, sinks them into storage containers. In some cases, Kim writes directly on their faces, introducing alternative interpretations via translations in Korean and English; an act of iconoclasm that invalidates the clean perfection of his early minimalist works.

One work bears a manifesto-like text that proclaims: “This is an age where editing is a required process for art-making, in place of creating.” The act of overwriting forces the work to conform to a contemporary sensibility in which information is composited and rehashed. Though he addresses the place of creativity in contemporary society with a hint of cynicism, it’s worth noting that his ability to shrink-wrap his youthful optimism of a previous era has probably saved him from the pervasive madness and eventual disintegration suffered by Balzac’s painter.

Suspended in mid-air is a plastic-wrapped painting over which a sketchy outline of some palm trees on an island is drawn alongside the caption ‘Wrapped and Erased and Bound Utopia 16-0.’ The word Utopia was first coined by Thomas More in 1516 for use in the title of his satirical-fiction Of a republic’s best state and of the new island Utopia. Though Utopia can be thought of as a place, it is really an impulse or tendency: the ultimate destination on the path of human self-improvement.

Perhaps it is partly in response to the Republic of South Korea’s turbulent political climate that Kim dwells on the idea of the “politics of ambiguousness” in his work. Though the concept of the republic is based on democratic principles, history teaches us that power struggles and corruption are unavoidable. Utopia is a wry joke that serves to highlight the social inequality found in societies the world over. The hollow outline of Kim’s tropical island seems to reflect its ultimate intangibility, like a mirage oasis hovering over a parched desert.

Reflecting contemporary civilisation’s experience of living without any illusions of teleological progress, his works circulate round and round, and traces of past journeys are layered up. The packaging boxes in which his objects are confined bear post labels; multi-lingual traces of journeys around the globe. At present, his works are at rest in Spike Island’s gallery, but soon they will be on the move again, continuing their migration till an unspecified time is reached; a time when we’ll be able to take the plastic wrap off Utopia and proclaim that the world will improve again.