The fifth 800-word piece informed by seeing Kim Yong-Ik’s ‘I Believe My Works Are Still Valid’ exhibition at Spike Island, Bristol is by the Preston-based writer Martin Hamblen. 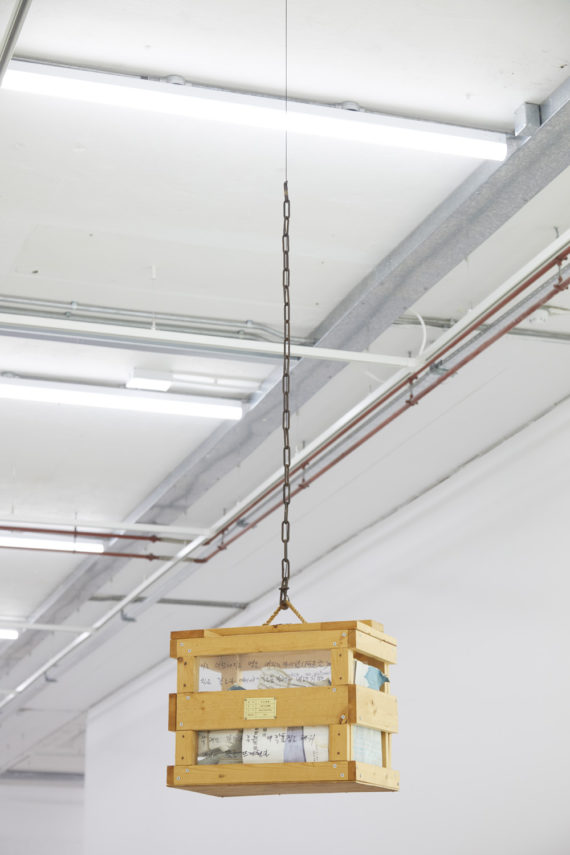 A box hanging from the ceiling, above head height. An invigilator interrupts us, the box and I, to tell me there’s a translation on the other side. The box spins on its axis, under its own weight. I can go straight on, or left, or right. I could retreat, too. Straight on there are squares in a corner, nine. Next to it, a tic-tac-toe grid of grey cards numbered one-to-nine but out of sequence, the ninth bigger than the others and super imposed, at an angle.

I feel like this is a witness statement, testimony which may or may not be a version of a truth.

There are nine canvases draped and drawn on one wall in a sequence; drawn, then draped, drawn then draped. The day after seeing them I attach some significance to this and then, only because I have visited another exhibition and another artist reminded me that, 100 years ago when Duchamp’s original version of Fountain (1917) was exhibited, it was displayed under cover, before being withdrawn.

A stack of three boxes. A canvas window. A red Roy Ascott Matisse cut up and out, controlled and ordered shards, deliberately detonated dominos. Black and white circles.

In pencil in block capitals, written on the wall, are the words: “THIS IS NOT A MISTAKE BUT WAS DELIBERATE.”

Underneath another art work, are the words: “MISTAKES ARE THE FLOWER OF MY WORK.”

Nine circles cut in nine squares, on the floor.

Nine circles cut in ‘fake’ flooring, on the floor.

A canvas on hinges, hung from a pillar.

There are more boxes but ‘better’ – not cardboard, wood. Kim Yong-Ik calls them coffins. The Coffin of a Hermit ‘Despair Completed’ (1993-2014) concludes this series, “works that are shown with their wrappings and crates intact” explains the gallery text.

‘I Believe My Works Are Still Valid’ is Kim’s first exhibition in Europe. Asked in an interview for Artnet when he knew he wanted to be an artist, Kim described his Damascene moment: during his second year of studying Forestry in 1967, he was “arrested by an ambition to become an artist”. He switched from forestry to fine art and started a “new chapter of my life as an artist”.

He completed his thesis on Duchamp in 1980.

The stack of three boxes were first exhibited as part of the 1981 Korean Young Artists Biennale at The National Museum of Modern and Contemporary Art, Seoul, South Korea. “He folded his canvases into boxes, labelled them with the titles and dimensions of the works they held, and on arriving at the venue simply exhibited the boxes as a stack,” says the exhibition guide. My version: it’s a vertical triptych and a redaction “to his identity as a modernist painter”; a right angle from the flat two dimensional surface of paint to the three dimensions of sculpture. I imagine a body bifurcated, bolt upright in bed, asleep then awake. You can have the external but not the internal. 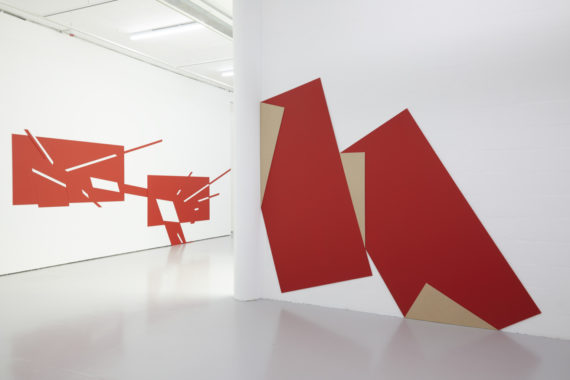 A reviewer for Bristol 24/7 writes: “The range of styles and materials speak for themselves…” while Spike Island’s own hand out, ‘Translation of works’, is a literal translation of the artist’s original accompanying text. The Financial Times website states that “Kim Yong-Ik was obsessed by polka-dots before Damien Hirst”; The Spike Island information states the polka dot is a “key motif” whilst an article on Observer.com, about the possible relationship between Western art and Korean abstract painting, quotes Kim saying: “these polka dots are just meaningless signs.” Writer Guelda Voien asks: “Is he having us on? Serious? Winking, at the least? Via a translator it’s hard to tell, but with his broad smile and inviting gestures, it’s clear he’s enjoying himself either way.”

What makes a dot polka? I don’t know but I have an idea, an apercu after visiting another art exhibition by another artist. Forgive my Freudian sleight of thought. The dots are drainage, holes at the bottom of a urinal, specifically Duchamp’s Fountain and its various versions. Polka dots may be meaningless but the “circle-shaped sheets” used, again and again, “to cover the painting beneath,” these “small deviations,” that now “speak for themselves” are speaking to me and my version of a truth. The dots are dynamic dissonance; worm holes which allow “theoretical passage through space-time that could create shortcuts for long journeys across the universe” (space.com). Kim’s versions of the truth, because he re-works his works of art, again and again, are not full stop conclusions but dot to dots joining entry and exit points. Ways in and ways out.