In the last of eight reviews stemming from the writer development workshop at Ikon Gallery in December, Trevor H Smith finds many questions left hanging in Edmund Clark’s exhibition, ‘In Place of Hate’. 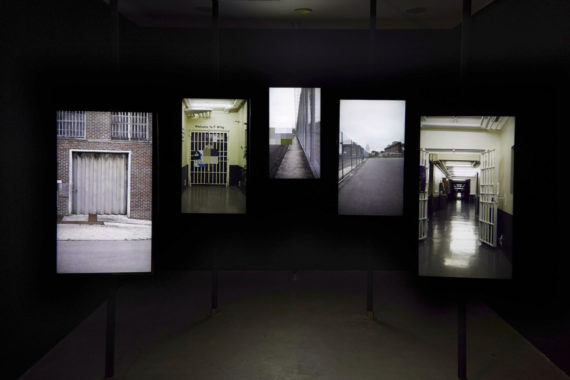 I am led down a strip-lit corridor, along a concrete footpath, and around the perimeter of an area fenced with barbed-wire. The plain walls and vinyl flooring of the corridors are recognisably institutional, and the building’s exterior is pure function: a 1960s red-brick administrative block. Finally, a sign bids us: ‘Welcome to F Wing’. This is Vanishing Point (2017) by Edmund Clark, a five-screen, portrait-mode video installation filmed at HMP Grendon, Europe’s only wholly therapeutic prison. Clark recently completed a three-year residency at Grendon and has previously worked on projects with asylum seekers, in Guantanamo Bay, and in a Control Order House in the UK.

As you enter the exhibition, ‘In Place of Hate’, a light box display of pressed flowers borders a rectangular area that is the exact dimensions of a cell at Grendon. The work’s title, 1.98m2 (2017) gives factual credence to what seems an unfeasibly small living space: Grendon is a therapeutic centre, but it remains a prison. In a second space, ten low-backed, foam-cushioned chairs are arranged in a circle. Three have become makeshift plinths for monitors showing a group therapy drama class, in which the prisoners perform a Greek tragedy. Two posters, taken from HMP Grendon’s walls, reinforce the theme of tragedian fate. The first, a flow-chart titled ‘Therapeutic Community Model of Change’, sets out solutions to behavioural disorders in language as sterile as the furniture; inmates are encouraged to seek ‘pro-social, non-offending alternatives’ to their violent behaviour. The second poster uses the familiar style of the London tube map to illustrate a life journey. Beginning with the strangely binary ‘born strong’ or ‘born vulnerable’, it shows that life is fated to conclude with either ‘life’ or ‘lifelong personality disorder / suicide’.

The installation My Shadow’s Reflection (2017) brings together images of the pressed flowers from 1.98m2, stills from Vanishing Point, and pinhole camera self-portraits by the prisoners. These are projected onto the inmates’ bedsheets which hang from the gallery ceiling. The self-portraits, taken during workshops that Clark ran as part of his residency, call to mind the spyhole of the prison cell door. Requiring a long exposure, these pictures – taken in the familiar ‘mugshot’ pose – are blurred beyond recognition, so that it is impossible to tell one prisoner from the next. These images are the exhibition’s summary and full stop. The work in the first two galleries is as cold and clinical as the institution; the blurred portraits breathe movement and life into this multi-layered exhibition.

Unsurprisingly, for an exhibition borne out of a residency in a prison, ‘In Place of Hate’ raises some contentious issues. Although there are glimpses of security cameras in Vanishing Point, and the flow charts are designed to keep tabs on the inmates’ emotional progress, there is little attention given to the ethics of surveillance. Watching a drama group run through a performance that is being recorded for the eyes of an audience it will never know is plainly voyeuristic, and the imposition of a resident artist only adds another layer of surveillance. This is a controversial and emotive subject. Grendon’s inmates have committed some of the most heinous acts imaginable including rape, torture, and murder, and yet they are being given the opportunity for an emotional rebirth. Questions also emerge about the degree to which Clark was immersed within the group: did he return home for evenings and weekends? Was he ever entirely alone with an inmate? What is the purpose of this residency? To whom is this exhibition targeted? An artist in residence at an institution such as Grendon treads a fine line between participation and documentation; between art and anthropological survey. Is it enough that the artist has brought the work of this institution to our attention? Clark leaves such questions hanging.