Do we start new things in January because we imagine its a clean slate, a step into a new position or is it because we have had time to reflect? Each year I look forward to what the other day, my friend so aptly described as perineum time, that is the space between Christmas and New Year. In this space ideas and possibilities stride about in my head, my attention tries to discern the shape and quality of these lovely new things. Sometimes the new things take form and seep into reality, but too often they dematerialize, undone by doubt, poor attention and frittered time. My intention in starting a blog is to notice. 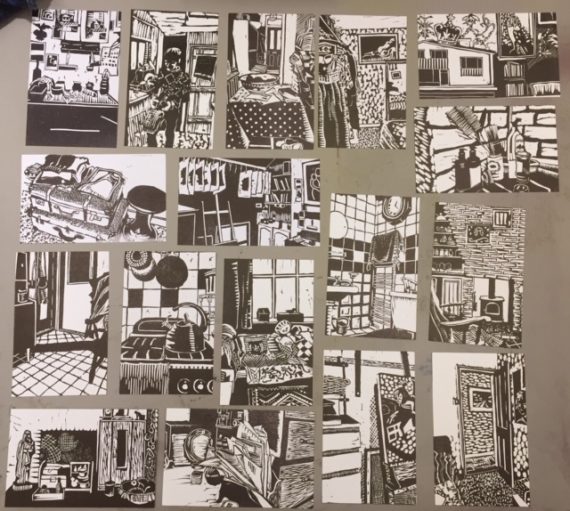 I will blog weekly keeping to around 200 words – achievable and concise. I want to document what I’m doing , thinking and experiencing, where my work is going, where its been and what it did when it was there. As well as my creative practice I need to write about my teaching. Imagine a creativity see-saw with teaching at one end and personal practice at the other, inseparable, but conflicting, to often one end is grounded whilst the other is suspended mid-air. Play needs to be restored.

In the weeks since my last blog I feel as if I have been emotionally thrown backwards and forwards like a ball on a parcel shelf in car that continuously takes corners too fast. I have managed to complete a couple of paintings for my next show, accepted a couple that I would have worked on more had circumstances been different and I’ve started to explore new ideas through drawings.

At the moment life is dominated by caring for my father. The structure of day and night unravels as quickly as I try and plan things, lists get left undone and replaced by bizarre conversations that take in the past, the hallucinated and the misunderstood. Under the influence of Dad’s medication and his cancer, his thoughts and ideas come out undeveloped or strangely deformed. My time is not my own and my head space has had its boundaries dissolved.

Dad’s health and and state of mind go up and down, but the trend is always downwards. His mood is both impetuous and unpredictable, but in trying to bring peace to an unsettled mind, I find there are only threads holding my own thoughts together.

Life has rushed past recently stomping over plans, thoughts and intentions, but the momentum of chaos has still delivered me to a good place. I’m in a gallery with new work on the walls and being here feels like stepping free of congealed glue. A sense that despite truly awful global events and challenging personal commitments, my work has gained its own autonomy and resilience, able rise above messy, sticky life.

To keep moving with my work though, I may need to make a new plan or at least adapt. I’m increasingly spending more time caring for my father, its a push pull thing, I want to spend time with him and for the remainder of his life to be what he wants it to be, but sometimes it feels as though my own thoughts and energy are slowly suffocating, eaten away in a reflection of the cancer and Alzheimer’s consuming him. I want too, to avoid a sudden crisis where everything falls into a void, gobbled up by unmanaged care needs.

But the feeling that my work is on its own journey, that it has a life of its own, that it wants to go somewhere, that it has intention even if I haven’t grasped what that is, makes it easier to reserve enough of myself just for that. I may only be able to get in my work space occasionally, but i know that when I do my work and I are there for each other. 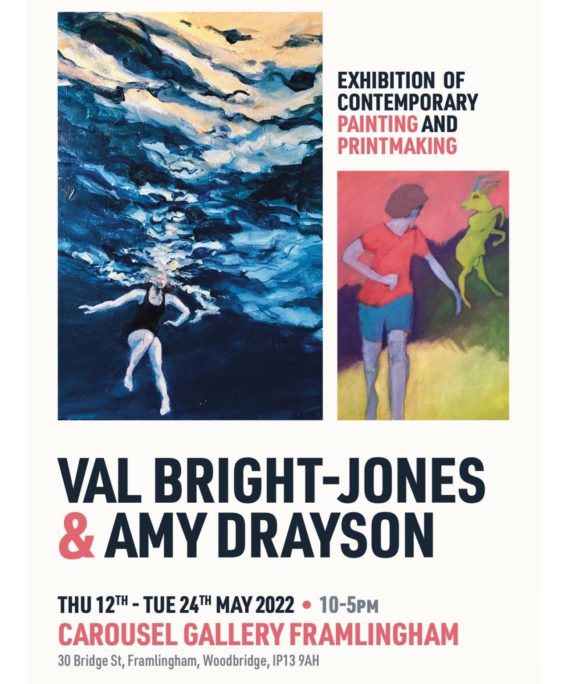 I’ve been thinking about names. As the artist, untitled is fine, I make the work, spend time with it, know it intimately and no name is needed; I move through relationship phases, by turns falling in love, hating it, arguing, collaborating, but there’s no need to name it any more than there is to use the name of your lover in bed, who else would you be talking to? But I’ve decided that when my work goes to a gallery it needs a name such that the viewer who has only just met it, has an opener, a way in with which they can strike up a conversation with the work.

‘Untitled’ is obviously not going to cut it; ‘Boy and Ram’ identifies it, but does it get us any further than introducing someone at a party as ‘Man in a Shirt’? The picture is about parental decisions and shows Isaac, freed, running down the mountain with the unlucky ram left in his place. I was pondering the nature of sacrifice and betrayal and how Isaac and Abraham rebuild their  relationship after this event. My first title was ‘Sacrifice’, but whilst not taking the viewer anywhere, it imposes a fixed concept on the viewer when they need to bring their own meanings, memories and experiences into the conversation. When work leaves the possession of the artist it starts to acquire its own narrative independent of the artist’s intentions and maybe the title needs to be a conduit to that too, even if eventually its identity does become ‘Boy and Ram’. So to send it on its way into the world I would like to rename this piece ‘Isaac, Why do you run? 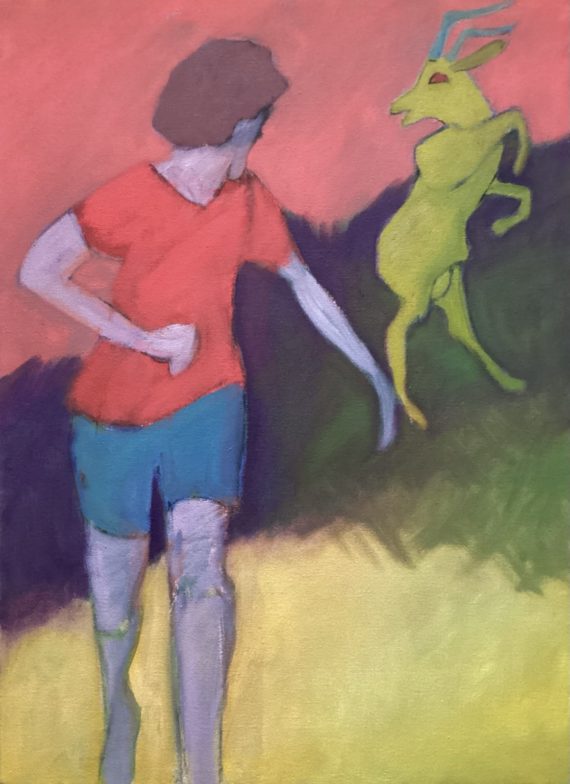 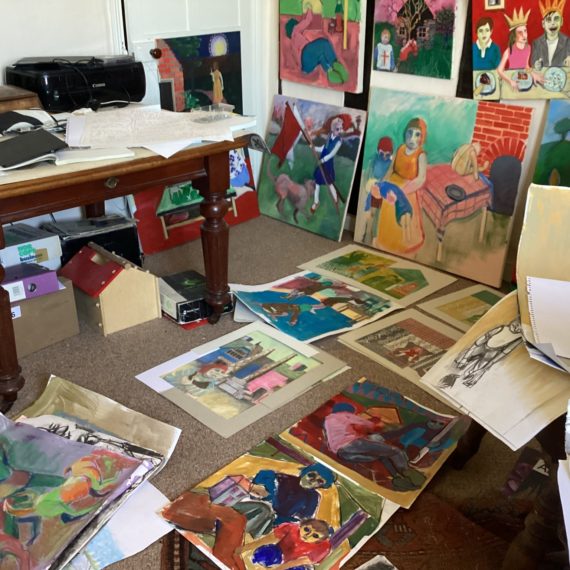 This week I’ve been pushing my head into exhibition mode, planning to avoid an undignified headless chicken flap later on – although with years of practice I like to think that I am now a last minute master.

I visited Carousel in Framlingham with Val, we’re booked for May. It’s a small space hired to artists an craftspeople, there’s an easy hanging system and a good window, the best thing I’ve seen there was an automaton, which I seem to remember had a combined theme of teaching and decapitation. I like Fram, it has a couple of good cafes, a castle and Ed Sheehan, we came away enthused.

Yesterday was spent looking through paintings, drawings and prints and making decisions. This year I’m participating in a number of shows and I’d planned on a show of narrative work, a show of my Postcard Project and another of woodcuts. When I sorted through the work I saw I was looking at something else quite different, indeed, I didn’t even get the postcard work out for consideration. I’ve known what direction I wanted my work to travel in for some time, but only yesterday did I see it was on it’s way.

Like everyone else my current thoughts are continually pulled back to the nightmare that Ukraine has become. Compassion, horror and outrage for the Ukrainians and those who have found welcome in Ukraine has created a thought structure in my head through which everything else must pass for me to know its importance and context.

This week I’ve been using the work of John and Paul Nash with my students. my plan was that they should find inspiration in  the geographic familiarity of John’s landscapes – I’m teaching about 20 miles away from Wormingford – and something more surreal and cerebral from Paul. The overview of their work presented by the library books I took into class obviously included their war work too and I couldn’t help but realise that I was seeing these images as if for the first time. A student bought in a Tate catalogue of Aftermath, an exhibition of artists’ responses to experiences of the First World War and as I flicked through looking at different images, I could feel a compassion for the people I was seeing I hadn’t properly felt before and a different understanding too of the artists making the work.

It’s impossible to know at this moment what changes this will bring to my own work, there is only a sense of certainty that there’s mo going back. 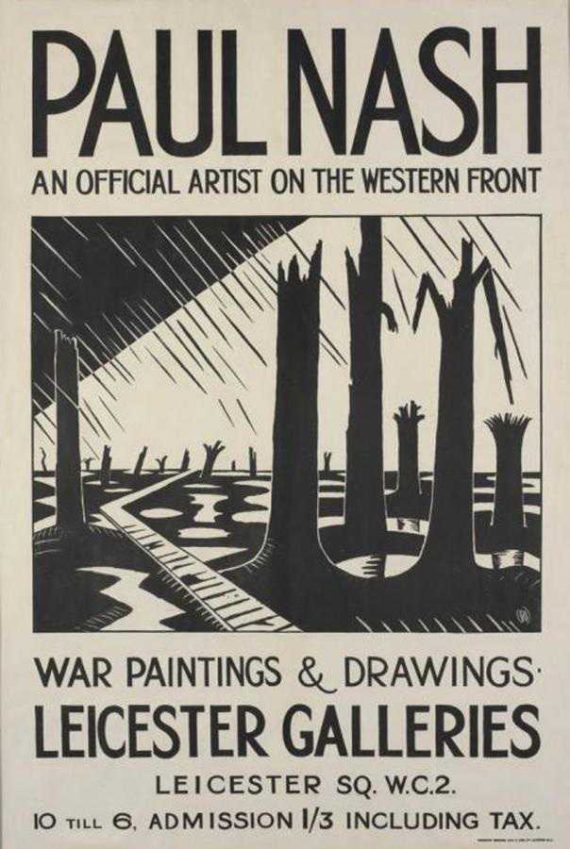