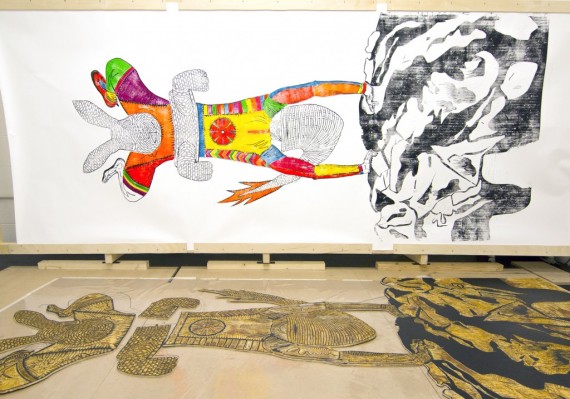 Using cut-ups of old work to create some new layouts and projecting them up to human scale!

Laying out; I’m imagining the blocks like those paper dolls where you can change the clothes heads etc.

The first cut is the deepest! Fear chills me as I sharpen my knives and get started.

A formative residency in Ullapool North West Scotland produce a set of bizarre costumed characters combining elements of ‘wild’ animals, outdoor sports fabrics and equipment. Through conversations with people in Ullapool I developed the opinion that you were “as likely to see a luridly dressed hiker in any remote place as a truly ‘wild’ animal!”

Since that I went on to make huge tent sculptures and most recently a theatrical piece on the Clifton Suspension Bridge with an actor and 3 physical performers that explored the perceived divide the bridge creates between city and countryside.

Today I am taking these characters and methods from the past 12 months, chopping them up and using them as the basis for new imagery- the basis for the woodcuts.

Having proposed this project some time ago, I was equally delighted and terrified to discover I had been awarded funding- so I now have to carry it out!

(Many thanks to ACE!)

1) An interest in pushing craft processes out of their comfort zone formally and performatively; creating something akin to “Performance-Craft” whereby the very real possibility of failure would be as much a part of the project as anything else, and the process would be documented as “the work”.

2) As the completion of a long period of research into the term ‘Wild’, that started way back in 2012 by looking at depictions of chimera, cyclops, dog-headed men etc. in early wood cuts and engravings. I saw these early images as an attempt to project ideas of wildness onto untravelled parts of the map. I then wondered what the contemporary equivalent of this process my look like. This led me to create the Wild Project (www.thewildproject.eu) with 14 other EU artists, makers and performers, then go on to a residency in Ullapool working with local basket weavers, and creating performances in the remotest part of Mainland Britain- NH02020 77000.