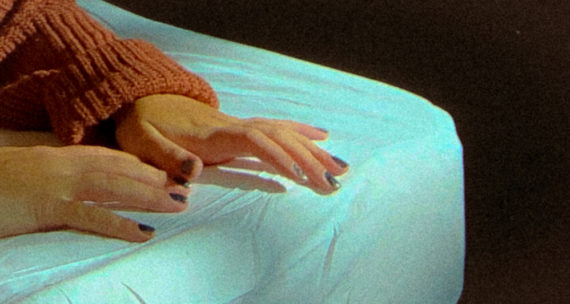 The artwork that Im working on at the moment is a connection between mediums. The mediums used in it will be projection and a oil painting.
Main idea of this project is to literally connect those two. A video will be projected onto a painting.
The theme/narrative of the artwork is not really specific, but is looking into a ‘innocent’ version of a male gaze projected in a 1969 movie Le Cerveau. In this movie, we come across a scene, where we see the main protagonist ride an elevator down in the middle of a stair spiral. On those stairs, we see the female (which is one of the main figures as well) running up in a short skirt. In this scene, as the elevator goes down, the main protagonist gets a clear view under the female’s skirt (or at least her legs), which reminds us about the term voyeurism. The voyeur here  gets a innocent like opportunity to become one and smirks with pleasure before ‘snapping out of it’. It is a short second, but we can still see some kind of discomfort on the female’s face as she realises that there is someone watching her.

The painting will hold the image of the voyeur, smirking and looking up. The video will be projecting a loop of the part where you can see the female’s legs and maybe also the part of realisation. That is not decided yet.

After researching various artists, I came across Nan Goldin. She has been mentioned several times in connection to my artworks (mostly photography) with the feeling that can be felt from the photos which influenced me to go take a look at the library in one of her books titled The Devil’s Playground. Without reading about the book beforehand and finding information about what the series of photographs included in this book are, I jumped right into viewing. At first, the book introduces itself with pictures of ocean and nature in general, which are like the calm before the storm. The storm comes with personal family pictures, which at first looked like a usual family album pictures… but that was exactly the problem (?). There was nothing indicating the feeling of discomfort and ‘the uncanny’ at first, but the more I read through the pictures, the more uncomfortable I felt. Being a ‘Voyuer’ was the first thing I could identify myself with. Looking through a camera placed in people’s houses and rooms to observe the usual moments of their life.

French Kiss; Joana&Auréle (Joana and Auréle making out in my apartment, NYC, 1999)

This chapter was hard for me to go through in the library, having people around me, watching me watch other people being naked in a personal and intimate moment. Voyuerism usually comes as a secreat obsession or sexual desire, that one experiences/enjoys by themselves. While looking at the pictures, I wanted to almost identify myself with the voyuer, wanting to see what I see in private. Its interesting how the ego changes in regard of what one is doing. Being surrounded by other people while observing such photos seems almost like unacceptable, but I still went through the pictures with awe how interesting the moments captured were and how uncomfortable I was feeling while watching them.

CONNECTION
I can say that I now see how people feel while looking my pictures as for some they could indicate the same exact feeling that I felt right at the moment of reading through the pictures. The one difference is that Nan Goldin captures real people and real emotions/moments. I don’t do that at the moment (who knows in the future), I create narratives based on those moments and emotions.