CHORUS – Ray Lee
On Wednesday 27th, when the SPILL festival started, I visited the art installation/performance called Chorus in front of the Town Hall in Ipswich. From the notes that I made while watching it:
There is 11 pieces of sculptures and each of them were activated and oparated separately. The sculptures each were creating sounds: Eerie, siren like, but all together made an amazing song (?).  It was very interesting to see the operators manually operating the whole sculpture withou communicating with each other, only looking at their clock on their necks. The operators also wore the same clothes and acted the same way, not smiling, looking very professional (reminded me of man in black). I also wrote down a sentence that I said to myself ,,You miss it, you don’t get to see it again” connecting to the fact that you can see it it in the moment, from the start to end. And then you have a feeling like it was a one moment experience that you wont be able to see it again. It felt like the world stopped for 30-ish  minutes.

GAIA– Luke Jerram
This installation in the Town Hall was another amazing experience. There was the visual aspect to it, with the earth lightening up the whole space, and the sound following and completing the whole installation. The movement of gaia changes from different perspectives. It looks like its moving towards you once you change the perspective, aka going away from it, looking only at one point on the planet etc. The sound on the other hand was a collection of sound as it is, conversations and interviews. Or at least that’s what I thought it was.

Because I went back to the studio to paint a bit more, I found out about one major problem, which is the fact that the black and white painting doesnt suit the whole concept anymore…

(06.12. 2021 update: I am glad that I did not stuck to the black and white painting as it did not have any cinematic fact to it, which is something i took from a tutorial with Gary Colclough. There is focus on the subject, but actually what else?)

which is a problem not gonna lie. So my idea is to paint a bit more and maybe do another black and white painting which would be against the first one maybe.

NEW PAINTING
The new painting takes after the colour palette of the photographs, because I really wanted to continue in colours. 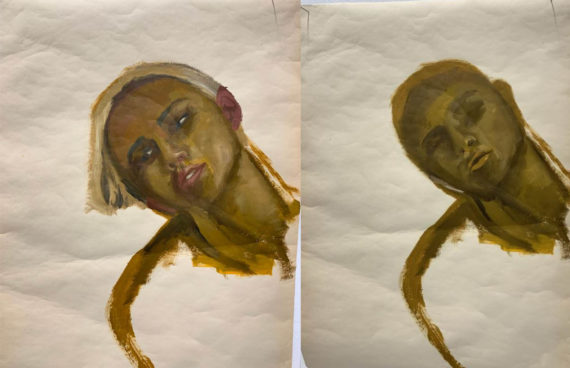 I am proud of myself that I enjoyed working on skin tones unusual to the usual ones. Meaning that I used brown and yellow. I would usually use red, white and maybe a little bit of yellow, to create a soft colour for my own skin.

(update 06.12.2021: I feel like I was trying to convince myself that I was working with unusual colours for skin, but I was actually just painting my own skin in a darker shade that I would usually do. In the future, I am planning in working in pink, blue and purple shades and combinations, which is I think more out of the unusual colour range for skin.)

I also tried outlining the next paintings. Giving them a starting point for the next time. It was quite exhausting, going from the library to the studio, so I didnt do much. But I will come back on monday to continue.

After taking some time off working on my art/project and focusing more on my dissertation, I thought of another idea that could work. I tried it immediately and fell in love with how things connect together although being just in a corner of a studio space. The idea was to try more paintings than just one and in a colour palette of the photographs.
Paintings
The idea of having more paintings just came along while I was rearranging my studio space and saw some my recycled paper roll on the floor. The reason for me to pick the paper up and do something with it was the fact that I looked at my drawing from the drawing workshop and saw how I used two papers to explain my ideas. I thought to myself: ,,why not use more than a canvas to create a painting?”. So I cut the paper and put it next to my canvas that I put in the middle of the wall. Also another note to it is that I usually work on my canvases using an easel, but this time, I have decided to work on a canvas that’s already on the wall.

I didnt make the paper cuts 100% straight because I still wanted to keep the flesh like look. The same as I did with my painting on the canvas without a frame. Next part was choosing which picture to paint and I chose this one here: 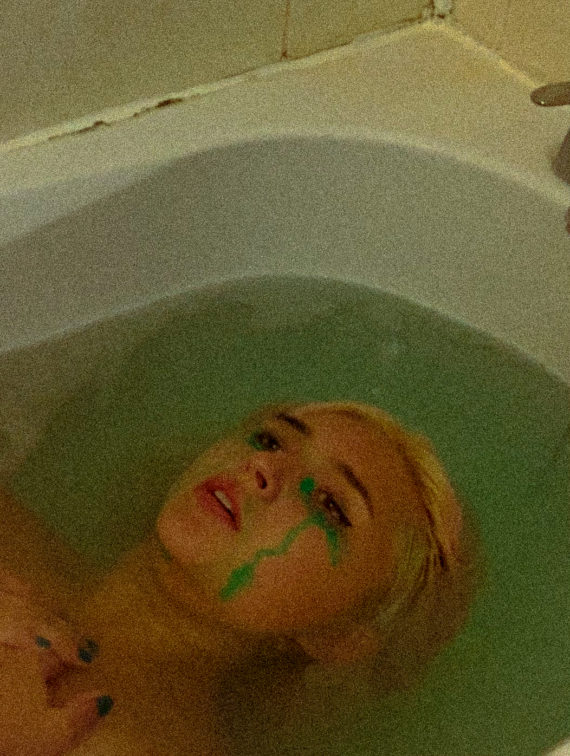 The reason for me to choose this one was the colour palette that I enjoy very much and I know that I didn’t plan on using it the way it was. While creating the colour of the bath water, I mixed emerald green and cadmium yellow,

which created an amazing colour that was beautifully lightened by the light coming through the blinds in the studio space. I had to capture it right away. 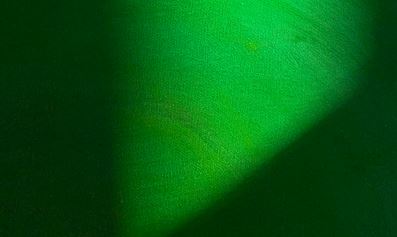 I don’t know the actual idea yet, because I want the flow to keep on going and I dont want to restrain my creativity in a box. I also really like the fact that the painting doesn’t have a face on it for now and also the fact that the other paper canvases are not even painted on. Why? because Its all connecting together with the photographs and the painting as well. 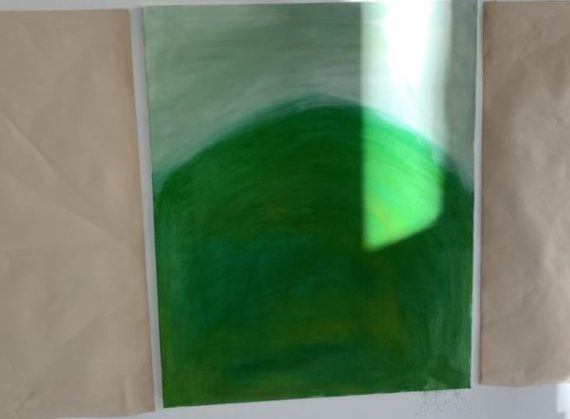 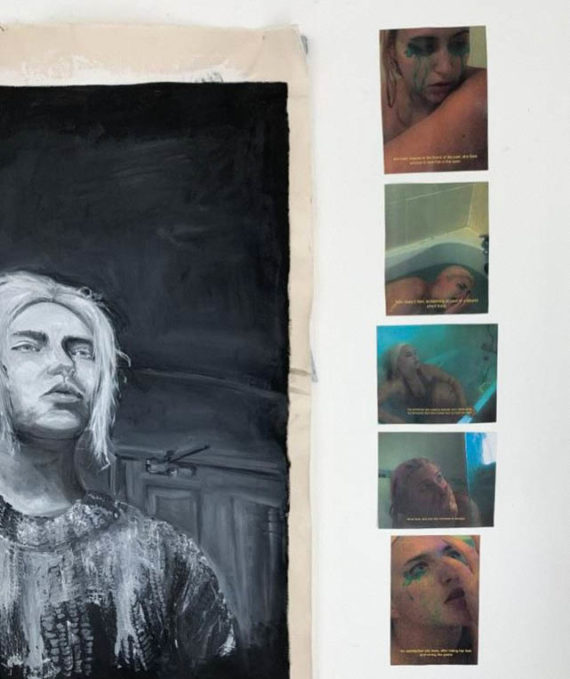 The picture that I took of the painting with the photographs is not the best and I will have to go back to the studio to take another picture of all of it together, but you could still see the colour palette connecting.
Mockup
I did this mockup of photographs that could work for the paintings and I quite like how it looks at the moment and might use my spare time today to actually do the underpaintings for the rest of the two. Went to the studio space before going to the library and I saw that the heat in the space made the paper go all weird and almost fall down. The reason for that could be just the fact that I taped the paper to the wall, so I will try hammering it with nails so it stays in place.

The reason for me to include Douglas Gordon’s work is because I feel like his projection of American Psycho is a great reference to my own projection/performance. Slowing down the projection could resolve in a disturbing, yet interesting artwork.
The artwork:
The artwork is a version of Alfred Hitchcock’s film Psycho, projected onto a translucent screen and slowed down to a duration of twenty-four hours. His 24 Hour Psycho was meant to reference artists like Andy Warhol, Alfred Hitchcock, Martin Scorsese and others.
,, The exhibition ranges from a large-scale projection of an elephant in Play Dead (2003) and direct references to Andy Warhol’s Sleep (1963) in Film Noir (Perspire) (1995) to the phenomenon of superimposed visuals in Between Darkness and Light (After William Blake) (1997).” (https://www.moma.org/calendar/exhibitions/7 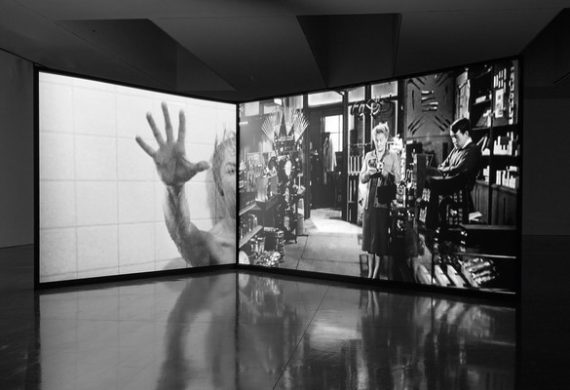 I saw Jill Magit’s work in one of our workshops I believe. Her work really left an impression on me as I really love performance art and her’s is just so different from others. In the future, I want to start more projects around performance art and her artwork called Still from Trust, from 2004 inspired me to want to step out of my comfort zone.
The artwork
It was a multimedia work based on a thirty–one–day performance in Liverpool and composed of a CCTV footage and a novella. The idea was to be lead by the city’s surveillance, dressed in a red trench coat with her eyes shut. The project engages the system into an intimate, two–way dialogue and alludes to the extreme degree of trust which surveillance practices demand of us. 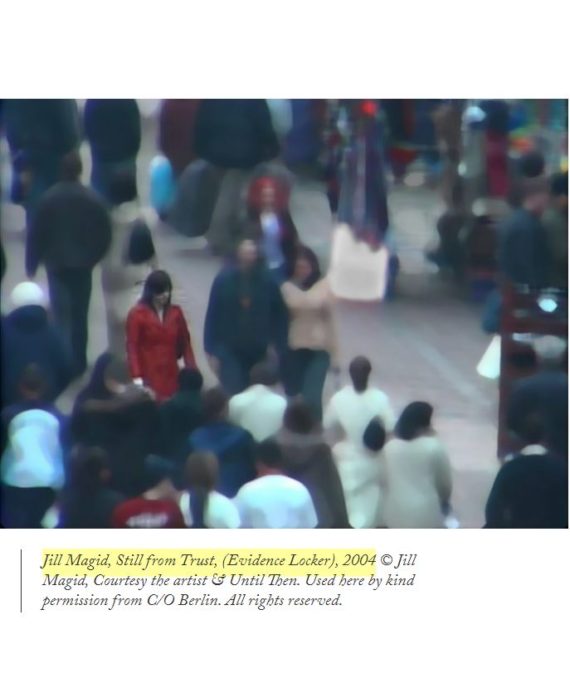