For my degree project, I have decided to create a connection between sculpture and painting, hanging paintings in the middle of a corridor, creating a different way for paintings to be presented.

The narrative which I want to follow here is based on the theory and graph created by Jacque Lacan. Theory of The Gaze and the cones of vision. Because the Gaze is something which is positioned in the world and stares at us from various points, there is something like image/screen that protects the subject from the gaze and vice versa. That is what my work is going to be presenting. The middle point between the two (gaze, subject). The idea is to create photographs which would represent the subject (or the gaze; connecting slightly to the theory of the male gaze as it represents the gaze having an owner) which is right on top of the barrier protecting one another, giving the feeling of being almost in ‘danger’.

These photographs were taken using a frame (with glass), real leaves, (see through plastic thing which name im unable to google) and camera (I believe it was a Canon one).

Here is the sketch that I will be using for creating my proposal:

The idea is connected to my previous suggestion/ sketch at Hollywells park in Ipswich in the greenhouse building. The idea here was to use the ceiling as hangers for ropes that would get connected to the paintings.

23/03/ Tutorial with Charlotte Newson about my Degree Show proposal
______
After giving a little sense of my proposal and work to Charlotte, I received questions about my color palette, my concept, and my context. As my context is connected to the theory of the gaze and Jacque Lacan, I wanted to create the feeling of being stuck to the screen/image as its the part of the graph created by Jacque Lacan that is supposed to hide/protect us from the gaze and the gaze from the subject.  Charlotte has mentioned that what message I want to give through my work has to be told right away in my Degree Show, which led me to the re-thinking of the whole work. Keeping my message and pushing it forwards a little bit more by creating a way to view the paintings that would be more unusual and uncomfortable. It is an Idea that CHarlotte gave me in the sense that viewing my work in a very narrow space might be helping the message to come across. 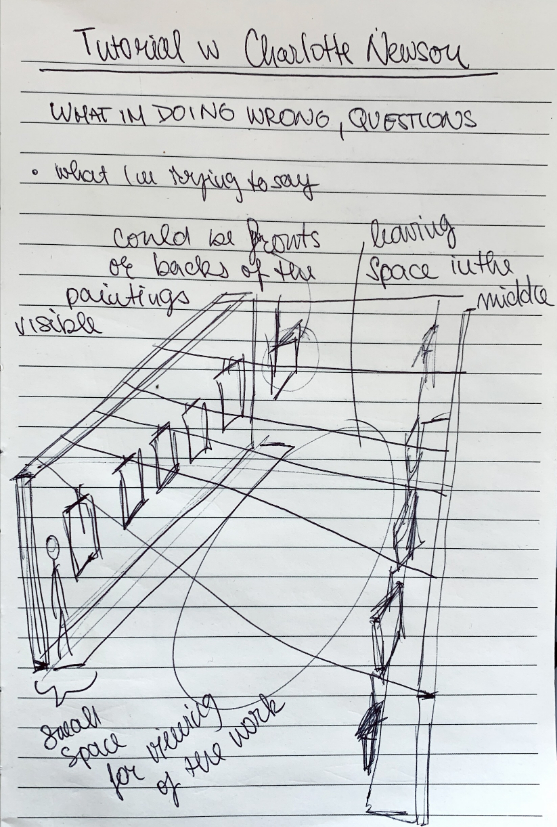 UPDATE N. 2: The ideas kept changing and in the end I stuck to the one I had at the start. The reason for my decision stands mainly at the point of the audience. Contrary to my past works, I really took the time to take in consideration the audience. One of the main issues would be the impossible way for people with disabilities to view my work without the danger of work falling, the inability to view it as others could etc. Basically taking away the opportunity to have the same experience given by the work to others.
_______________________________________________
29/03/2022
Finishing of the first side of the painting and following my 1st idea.
Colour palette vise: I tried to follow Charlotte Newson’s words in which I was told that my colour palette tends to be slightly muted and related to one specific art group whose name she could not think of at that moment. I followed that and tried mixing the colour green with other types to create slightly muted colour palette for the skin. In the end, the whole painting looks not as muted as each of the colours looked like after mixing, but I still enjoy the vibrance of it.  What I enjoy about this painting is the abstract aspect of each painting that together creates a abstract/realism painting. 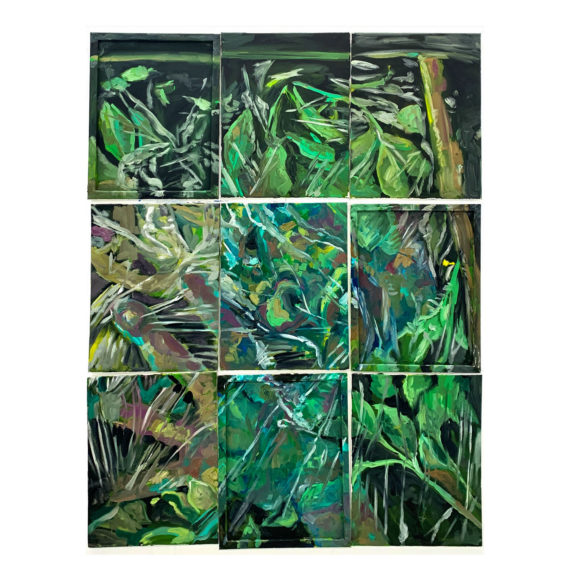