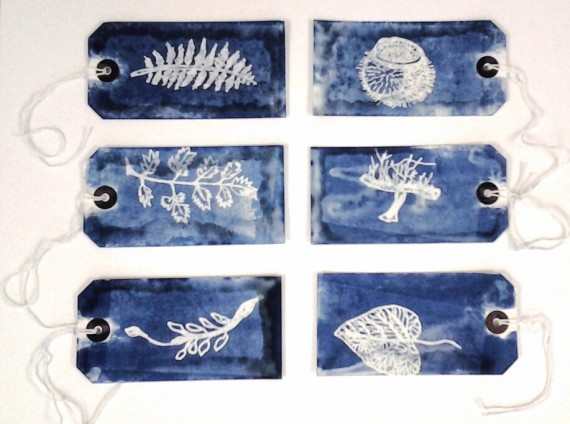 In thinking about producing reproduction images on postcards (from week 76) and the Andre Malraux research from my previous exhibition The Imaginary Museum, I thought it might be useful to consider some of the processes involved throughout the history of photography. I enrolled on a day course to explore the early photography technique cyanotype, to see if it was something that I could apply to my book making practice.

The history of Cyanotype
The Getty Edu pdf publication lays out the historical background for the cyanotype process as follows: “The cyanotype process was invented by the astronomer and chemist John Frederick William Herschel (British, 1792–1871) and featured in his paper “On the Action of the Rays of the Solar Spectrum on Vegetable Colours and on Some New Photographic Processes,” which was presented to the Royal Society of London on June 16, 1842.  The name cyanotype was derived from the Greek name cyan, meaning “dark-blue impression.”

Color changes of solution of iron salts were noticed first by Count Bestuscheff in 1725 and more precisely described in 1831 by Johann Wolfgang Doebereiner (1780–1849). The inorganic pigment Prussian blue (hydrated iron hexacyano ferrate complex), which is the image-forming material of cyanotypes, was prepared first by Heinrich Diesbach in Berlin between 1704 and 1710 and was used after about 1730 as a pigment in oil paintings and watercolors. Herschel experimented with the cyanotype process in the 1840s and inspired Anna Atkins, daughter of his friend Dr. John Children, to illustrate her botanical studies with cyanotype photograms. The three volumes of her book Photographs of British Algae: Cyanotype Impressions (1843–53) represent the earliest examples of books illustrated with photogenically produced images.”

The cyanotype process
The cyanotype process was mostly used as a cheap proofing process or in architectural designs, hence the name blueprint. However, in the 1960s artists began to revive this medium to explore the creative possibilities of alternative photographic processes. Similar in technique to the preparation of silkscreens used in the screenprinting process, paper (or other image supports) are coated in a light-sensitive liquid made from a mixture of ferric ammonium citrate and potassium ferricyanide*.

This is then exposed, either in a lightbox or in direct sunlight, using objects or images drawn onto transparencies to create a resistance to light in those areas, thereby creating the image in negative. After the paper has been exposed for the required amount of time, it is quickly rinsed in cold water to fix the image.

Cyanotype workshop
Due to the time available the workshop leader had already prepared the paper by painting it with the photosensitive substance and allowing it to dry. As part of the session we had access to books detailing the work of artists engaged in these practices which we could use to take inspiration for creating our own work.

While I was searching the books for ideas I was particularly interested in the botanical images produced by the artist Anne Atkins, as they reminded me of an earlier project that I’d been trying to find a solution for. When working with Museum for the History of Science, Philosophy and Religion, I’d come across a Biblical Herbarium, a 19-century handling collection which taught science through the physical investigation of all the natural materials found in the Bible. I decided that I would like to create an artist book from this information so I used the workshop to test ways of drawing and transferring botanical images onto luggage tags which I will use later in my practice.

Future developments
Another material I’ve been hoping to use is a roll of paper for making tea bags from, which I acquired from Scrap. However, due to its textured surface and fragile materiality I’ve found it difficult to find a process with which to transfer images onto it. Hopefully cyanotype will be a useful medium for this.

*All photographic chemicals and instructions are available from https://www.silverprint.co.uk