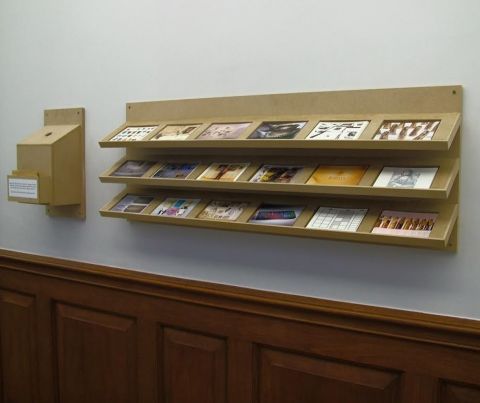 The relationship between vitrines and institutional critique has inspired my latest collaborative project, ‘The Imaginary Museum’, a direct reference to the Andre Malraux publication ‘Museum without Walls’ (discussed in week 60). Under the auspices of the Artist Book Collective, I invited artists to submit new or existing images relating to the idea of the museum or archive. Each of the selected images was produced as a multiple edition A6 postcard to create a collection of 18 different images. Responses to the brief could include taxonomies, museum methods and display, exhibition plans or blueprints and the role of photography as archival material.

The Imaginary Museum
“The work references the archive or museum in both form and content, and the collating of images allows audiences to create their own imaginary museum from the postcards. In presenting the work in a museum postcard format, the exhibition explores the multiple nature of these museum images and the potential democratisation of artworks through the use of the multiple.”

The work was due to be shown as part of a series of exhibitions in conjunction with the International Contemporary Artists’ Book Fair at The Tetley, Leeds, opening on 7th March and continuing till 26th March. In the first instance I had intended to produce simple postcard holders or shelves to display the works but after a discussion with the technician about the participatory nature of the exhibition, it was decided that a custom designed shelf with tray inserts would create a sleeker look to the installation and would also be much easier to manage. The shelf (shown in the image above) thus became an integral part of the work and a potential vehicle for future collaborations on a similar theme.

Another element of the work was the addition of a nearby honesty box with a small notice asking for a discretionary donation of 50p per postcard, which was intended to inscribe an element of value in the work and ensure that people gave more thought to the works that they chose. Any money raised from the exhibition was to be split between the artists involved, creating a connection between the purchase of the works and the artists’ labour.

Concepts and findings
It was encouraging to see audience interactions with the work and receive feedback from invigilators, who reported that there had been discussions between groups of visitors in deciding why they were choosing one particular image over another. Equally, the honesty box proved to be successful, taking £150 over the course of the exhibition. This element of ‘donation’ rather than ‘price’ added another unconsidered element to the work, that of gift, where interactions between myself as curator, the artists and the audience became a kind of gift-cycle.

After splitting the donations between the artists, each payment came to a total of £8.34 each. Due to this factor, and the wish to create a legacy to the project, it was decided to offer the artists another option; either to take their share of the donations as agreed, or to contribute it to the production of a catalogue/artist book of the project documenting both the work and the images, in return for two copies of the publication. Thankfully, most of the artists were interested in this option, and the publication is in progress.

For more information and images of the work, visit http://abcarchive.blogspot.co.uk/2014/03/the-imaginary-museum.html