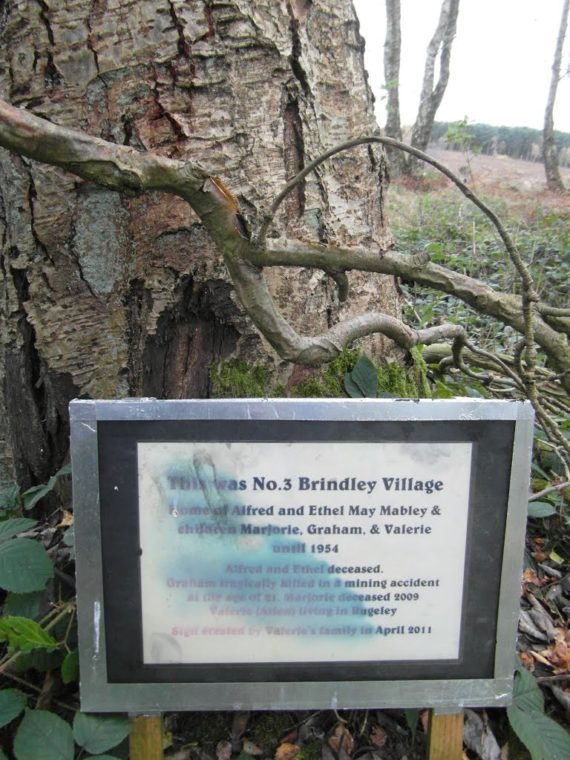 Our third session looking at creating responses to the site involved taking Bo to visit the Brindley Village location and to critique ideas discussed so far. As mentioned in a previous blog post, it has been interesting to consider making art in a public place that hasn’t been officially sanctioned in some way. Previous pieces of work that I have left at the site have sometimes been removed straight away, or if left near to existing ‘shrines’ have remained untouched.

One such piece that has remained intact is a re-made sign that I produced as part of a recent collaborative project (see www.dis-placed.com for more information). In researching the site I came across images of handmade signs that had been made to commemorate the individual mining homes that had once stood on the site:

When I eventually found the sign for Number 3, it had worn away to be totally blank, the frame still in place but looking rather weathered. In thinking through ideas for making a response to the site I decided to remake the sign and replace it back where it had originally been placed. 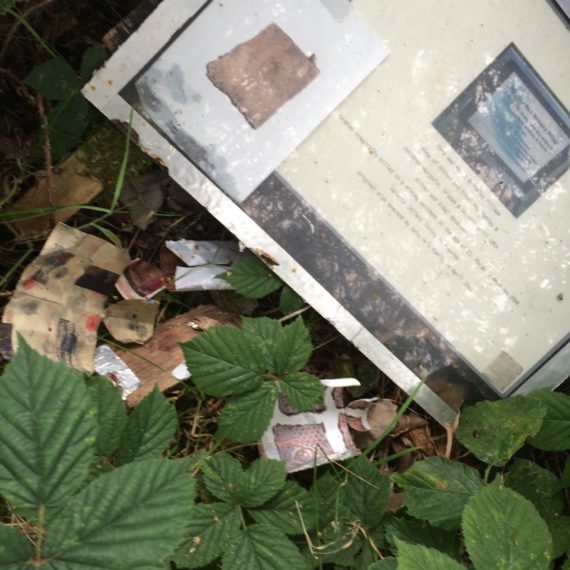 Until now this sign remains in it’s location and this led Bo and I to look at using existing signage as a potential surface for projected video work at the site. There are various types of plaques and memorial inscriptions screwed into the trees to commemorate people who used to live there, and these shrines are ‘allowed’ and left untouched. As my work serves to make visible what is now invisible, maybe it can be considered a memorial in itself.

So the next part of the process is to decide on the content that is going to be projected at the site, and the surface that will be used. There is also a third consideration which is how to leave a permanent piece of work that could reference the video content (so a Layar piece that could be scanned?). Whilst considering these things I took Bo to visit a nearby reconstructed war hut, to give an idea of the shape and structure of the buildings that would of been on the site originally.

To our good fortune, a previous resident of the village was there and showed us her personal photographs of living at the site when it was a mining community……..well this exciting bit of synchronicity answered the question above; surely the video content would be about a remembrance of the village as it was? So the next step is to meet with the resident and see how her memories and narrative can inform the projection element of the work. Watch this space!

On working with the former resident and some others involved in documenting the site and narratives of those who lived there, I have been able to gather some visual images of the village to use in my work. What interests me about this collection is the fragmented nature of the archive- personal photographs, hand drawn maps, historical aerial photographs and newspaper clippings. It seems that my journey of gathering an understanding of this place is to remain still shrouded in partial mystery.

Using these found images I have been drawing over them and recording the sequence as sets of video using the Procreate app. I love the painterly qualities available in the app and the ability to make imagery that retain the quality of archive photographs. By using the digital sequence of painting over and revealing parts of the image I am interested in recreating the sense of memory and a place being remembered and then forgotten, by working over and then obliterating the image. Due to the format of this blog, I am unable to share the video sequences here.

In the fourth session we tried projecting these video sequences at the site, onto various surfaces which were at the location of the original buildings drawn. The results were mixed, and it was difficult to record the projected image from the mini-projector, which led to discussion around either-

1.Needing to find or create a larger surface to project onto. Discussion ensued about the relevance of maybe using a hospital medical screen positioned in the trees as a ‘screen’
2. Not projecting at the site but instead placing a Layar image which could link to an online video.
Again, I am unable to upload the video footage of the projected images to this blog.