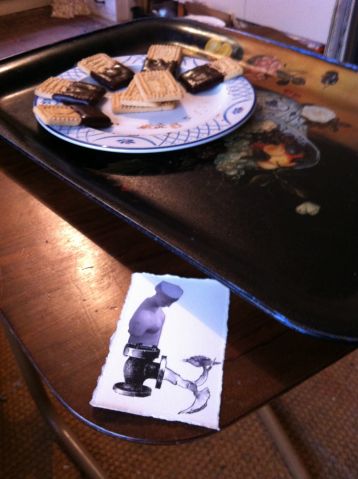 Seven poets joined me on the final afternoon of my Pantechnicon show at ArcadeCardiff. Nearly all of us have worked together before in some way and I have come to rely on our collaborations to help me make sense of – but also to extend – the work I do.

I’ve described more about this on my parallel blog boxingthechimera but the event and the show as a whole crystallised a few things for me which tie into the Re:view process. For much of my artistic life I have worked in a fairly reclusive way – on my own in the studio, showing rarely, and this isolated way of working is still important to me. Increasingly though I’m finding that other, outside voices and processes are essential also.

So although it was exhausting working in public and negotiating an inner and outer dialogue at the same time, one of the things I most enjoyed at ArcadeCardiff was the contributions of visitors. During the course of the exhibition I worked on drawings, using the found objects on display as motifs, combining them in new ways. People would ask me about or comment on the drawings and I invited them to add their words or make their own marks, and incorporated these into the images.

I had many conversations with people of all ages and different interests. Some told me about objects in the show that had always been a mystery to me: others had rather fantastical ideas, which I liked just as much.

Another surprise was the pleasure I got from being part of the life of this particular retail centre – which against all my expectations felt human – even welcoming. For just a few weeks I felt part of the community of security staff, cleaners, shopworkers and customers, thanks obviously to the relationships which have been developed over the years by artists/ArcadeCardiff curators Rob Kennedy and Morgen Hall.

As I’d hoped, I have learned a lot about the way I could work in future, and expect this to filter through my work as I develop ideas in the Arts Council Wales R&D Project, Boxing the Chimera.