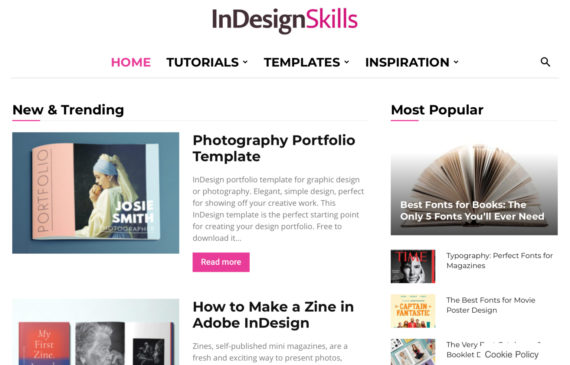 As part of my research into different businesses and creative women in business, I spoke to Director of InDesignSkills Ltd, Grace Fussell. Established as a limited company in April 2018, InDesignSkills is a blog-based e-business the offers authentic and relatable content and skills to the design e-learning industry. In this interview Grace gives a frank and honest perspective into how her business grew from a small blog into something much larger and the steps she took to build it into the successful business it is now.

Elisa: Could you give me a bit of background to the company and why you started it?

Grace: I’m a self-taught graphic designer, and when I was starting to teach myself InDesign to be a print designer, the resources online weren’t particularly good. To actually go to a physical course was quite expensive, so I went to a two day course at a local teaching centre. To be honest, it was a bit dry. I was taught all the technical stuff, but the actual designs we produced at the end of it were quite amateur looking and weren’t representative of what I was seeing in agencies.

I was always thinking, ‘how do professional graphic designers learn how to produce things as they do?’ and I wondered how to teach myself to that standard without paying a lot of money or retraining. So that’s basically where the idea came from. It’s explaining how to do basic graphic design things such as layouts for magazines and business cards – things that small businesses need; principals of typography, things like that. We did it to explain things in a way that weren’t too patronising, too techy, or geeky. This is what I found with some of the existing sources online, led by these nerdy American guys, who’d say things like ‘of course you know how to do this’ which of course, when you’re starting out, you don’t!

So I started this blog with all of that in mind and produced designs at the end of it, which looked really good. And that was the niche. It was finding a bit of a USP in the design education sector. Initially it started as a bit of a hobby while I was doing my normal graphic design job, which was an in house permanent employment job.

E: Could you tell me a bit about how the blog grew over time?

G: The blog was quite basic in the early days, then I started getting quite a lot of emails from places like America and Australia, mainly, at first, women who were looking to pursue a career after they’d had children. It was this real niche, because a lot of the techy design world neglects people like that because they’re a bit alienating for them. There were a lot of women who said they were looking to get into a marketing job, and some had found a position in a print making shop who needed someone who could do bits and bobs. It was really cool because I’d get all these emails saying they’d got a job from self-teaching on my site. It was really nice to know that I was helping people, and it just grew from there really.

Then I started getting more interest from people like Adobe, who were seeing I was reaching people and targeting an audience they were struggling to access. It grew from there and I started to do video courses that people would pay for and offers for colleges and schools to give students access. 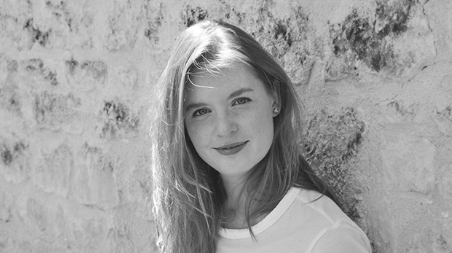 E: How long have you been running for? And how long did it take you to build up the website?

G: I set up the website about 5 years ago. The thing with these internet companies is that you have to play the long game. Mainly because you’re competing with other sites that are providing something similar, so it’s basically about building up a big library of content that is better than anyone else’s, and eventually, you get to the top of the search engine. This is quite different to my other work because it’s all about understanding SEO and researching gaps on the internet to fill them, keywords and things. But when you get it right, it’s actually really exciting.

So earlier this year, it felt like the business was getting a bit too big to run as a sole trading business. One thing we’d started doing, which was really successful, was advertising on the site. We’d approach companies such as font designs and Adobe and offer to put their adverts on a banner on our site. We then got approached by a company that would approach businesses on our behalf to put adverts on the site, which was a good bit of outsourcing.

After a while it started to go really well and bring in quite a bit of income, which was too much to handle on our own. We kept getting more and more emails about sponsorship and advertising, and basically the two of us were drowning in the amount of business we were getting. I think that happens with a lot of small businesses, which don’t go well for such a long time but then suddenly when it does go well it can be harder to cope.

We were running it in France at the time but decided to move back to the UK, and this meant that I was able to establish it as a limited company. We are both directors, split the shares 50/50 and we have designated roles, and it just seems to work so much better.

E: How do you administer the finances? Do you pay yourself through PAYE?

G: Not at the moment. I also have freelance work, so I pay my salary through that and then I can pay myself dividends out of the business, but really I’m lucky because my company is not my whole work, I can kind of let it grow and I’m not desperate to take a lot of money out of it. Also, in the future when I might want to buy a house or a car or something like that, perhaps I could reap the rewards from it. But actually, I think that’s quite good advice to not take out too much money in the early stage of your business, it’s good to be very conservative, as you never know what might come up in the business. You need to put things aside for the tax bill at the end of the year, keep it in your business account and for your dividends and pay etc transfer that to another account.

E: What do you think about me, as an artist, setting up as a limited company?

G: I think it’s really good, it’s brave, and a completely sensible thing to do; because as soon as a client is put off by you being a sole trader, that’s a sign that perhaps something has to change, as you’ve lost business. It’s been a bit of a learning curve for me, I’ve always liked creating nice things, but the business side of it, when you get a handle on it, can be really buzzy.

E: Do you have a business strategy and plan?

G: I did, but I think it’s actually exceeded my expectations because originally what I wanted it to do is to have it as a little passive income business, that I could keep ticking over in the background and it could supplement my normal income, and actually, over the last year and a half it’s grown to such as extent that I have to give more attention to it, it’s not something that I can leave to do it’s own thing.

And now, I think my ambition with it is to grow it to such an extent that I could maybe sell it. I don’t really want to be running it forever, so it would be great to sell it to someone like Adobe, or one of these big design education sites to take it off my hands, get a chunk of money and maybe do something else.

I think it’s quite a good attitude to have not to get too attached to a business (but I think that’s very different to what you’re doing as an artist), and sell it when it’s doing really well. If it gets beyond your capabilities I actually think it’s a good thing to sell it and hand it over to someone else, so yeah, I think that’s my ambition maybe in the next 5 years or so, but we’ll see. I like it and enjoy it, but it would be nice to see it as a stepping stone to something else.

If you do well in a business it means you can put your energies into other things as well, which is quite fun. It’s been a really good experience actually. I think it’s the right thing to do.

Find out more about Grace and her business, and also try out some of her tutorials for yourself at www.indesignskills.com