Aarhus seems to be a city of circles. From Olafur Eliasson’s installation, Your Rainbow Panorama, on the roof of Aarhus’ contemporary art museum, ARoS, to the iron covers of the drain covers separating sections of pavement, circular forms and motifs were a constant companion as I walked the city. 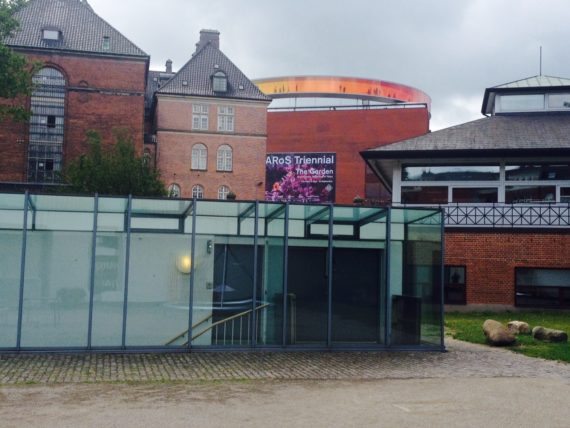 Eliasson’s circular glass walkway on the roof of ARoS dominates Aarhus’ skyline. It sits high above what is still a relatively low-rise city and is visible from streets and public spaces some distance from the centre. Eliasson’s walkway consists of a platform with coloured glass walls which form a continuous rainbow spectrum. The 150m circular walkway floats above the roof of the art museum and extends beyond the edges of the square building, offering viewers the feeling of walking in the air as well as vertiginous views of the streets below.  Eliasson’s installation has been in place since 2011, and so pre-dates the European City of Culture festival, but it has a strong and striking presence in the city and forms a visual reference point around which the Festival revolves. It is also the backdrop for Fujiko Nakaya’s vapour installation, Untitled. The particles of steam which rise up from the roof space refract the colours of the glass creating a foggy rainbow that seems almost solid within the internal circular space of Your Rainbow Panorama. 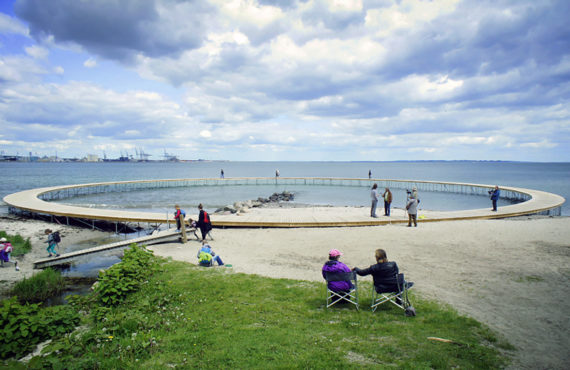 Gjode Povlesgaard Arkitekter’s (GPA’s) work at Ballehage Strand also takes the form of a circular walkway which straddles the elements of the earth’s surface; this time land and water.  The walkway, Den Uendelige Bro (Infinity Bridge), skims the tide where it meets the shore. As the tide comes in and out, more or less of the walk will take place over the sea.  I discovered GPA’s work during  a visit to Ballehage Strand, a long stretch of coastal park just outside Aarhus, which is currently the host to the outdoor site-specific section of ARoS’s Triennial exhibition The Garden. Like Your Rainbow Panorama, Infinity Bridge was in place before the 2017 Festival; it was made for Aarhus’ 2015 sculpture exhibition.

While these works offer circular journeys at very different elevations, they have in common a focus on looking outwards and  into the distance, towards the urban landscape of Aarhus, and on looking downwards, into the city in Eliasson’s installation, or in GPA’s case, into the shallows. While both pieces of work encourage a sensory approach to walking, many of the people whom I observed walking on each walkway were looking outwards, noticing and sometimes pointing out something on the horizon to their companions.  By contrast, two other circular artworks that I found had more introspective feel, with a focus on the inside of the circular form. 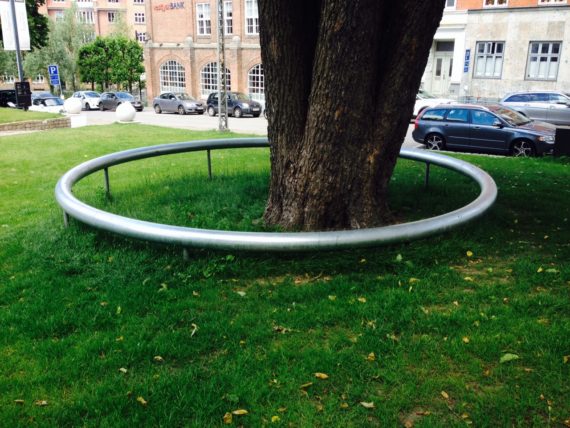 Aarhus’ Kunsthal, which is located close to its much bigger neighbour ARoS, is host to three contemporary art exhibitions during the 2017 Festival: a large solo show by Swiss Artist Ronan Signer; a large retrospective of Danish collective Solkorset; and a smaller installation of four sitting pieces in the Kunsthal garden by Ronan and Erwan Bouroullec entitled OUI. The circular seats are made of broad tubular metal and have been designed to appear to float above the ground.  Two of  the constructions are installed around trees, but the trunk of the tree is offset from the centre of the circle, which gives a pleasingly human feel to structures which are otherwise shiny, slick and very contemporary looking. Because the benches are smooth, hard and metallic, they don’t invite sitting for long periods of time, but their continuous form does encourage people to sit in groups, almost as little communities, and for a number of different groups of people, or individuals, to use the circular benches at the same time.  These circular structures for resting and being still are in sight of Eliasson’s circular structure for continuous walking and movement, which seems a nice parallel. 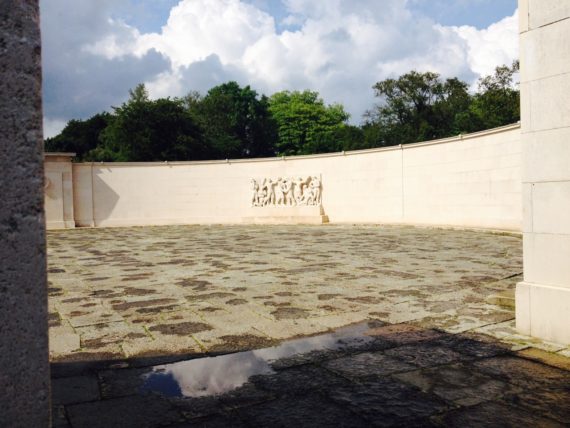 The circular war monument in Aarhus Mindeparken (Memorial Park) is the site for Marie Højlund and Morten Riis’ sound work 4140 Voices.  The memorial is set into the landscape and sits below ground level forming a circular, walled chamber which is accessed via a single narrow entrance. The walls of the memorial are carved with relief images of soldiers and the names the 4140 men from Aarhus who died during the first world war.  Højlund and Riis have recorded and mixed the voices of current Aarhus residents speaking the names of each of the soldiers who died, thus connecting present Aarhus to its past. As you walk into the memorial space, individual voices and names become prominent; but at other times, combinations of voices seem rhythmic and more abstract – the acoustics of the memorial seem to create waves of sound that echo and circulate almost endlessly. There is nowhere within the memorial to sit; visitors must either stand and listen or walk slowly around the walls reading the names of the dead. I found the effect of reading the lists of names, of walking continuously and endlessly as the waves of sound reach your ears, to be overwhelming. The sense of loss suffered by the city, its families and communities is amplified and is made audible.

So Aarhus is a city of many circles, each one standing for very different and important aspects of its physical, social, cultural and historical lives.