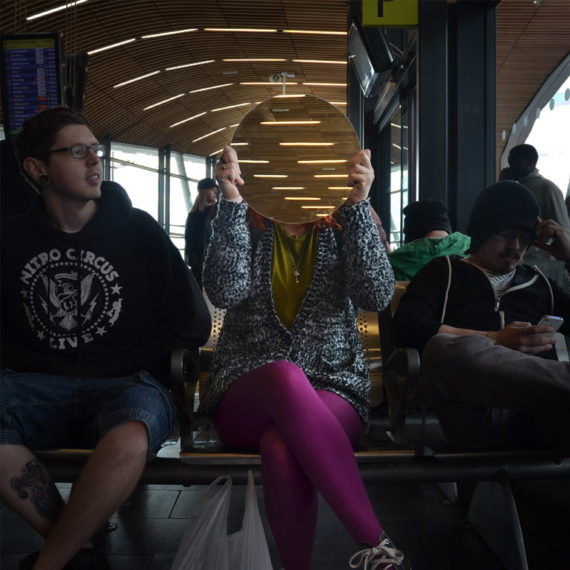 The images below are people interacting with a piece I exhibited ‘No Walking Required’ in Ebbs & Flow as part of my interim show. 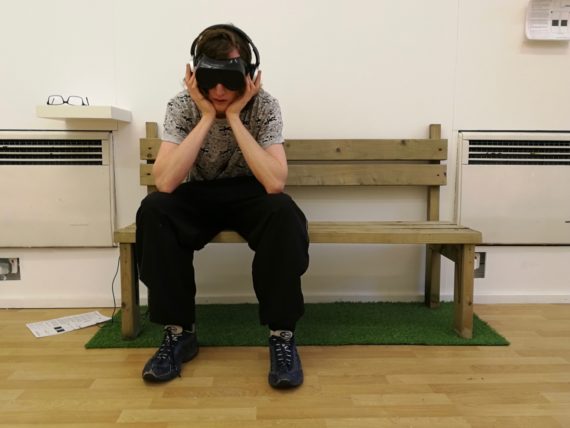 The work was an audio piece that asked the audience to sit down and listen to a manufactured journey mimicking sounds experienced on a nature walk. These noises are all produced by myself based on the sound effects used in films to create ambience. To give a surrounding experience of sound I included blackout goggles alongside the headphones. Sat down (or standing) in the dark, I hoped for the audience to listen to an artificial environment unfold around.

Each person would approach the work differently, friends that listen were comfortable to sit and put the goggles on trusting. (or as much as they could knowing my mischief) While people who visited that did not know myself and especially if pass through on their own were much more hesitant to put blackout goggles on. Having to give up two of their key senses to experience the work is a lot to ask.

People would be much more pushy to see someone else participate first, letting them be a guinea pig.  Or hold the goggles only in front of their eyes to allow them the option to peek.

I am interested in exploring the audience’s involvement with my work here rather than the audio side. How they respond and ways they approach work? With this piece being a solo experience at one time, what position does that put the individual in? To the rest of the people waiting to hear, is that person already listen unintentionally performing in a way?

I have guided them into action/position, where they still have a choice of what is comfortable, standing or sitting, blackout goggles or just closing their eyes. I want to push the participation of the audience in my work, unintentionally performing, swapping their role from just being a spectator. 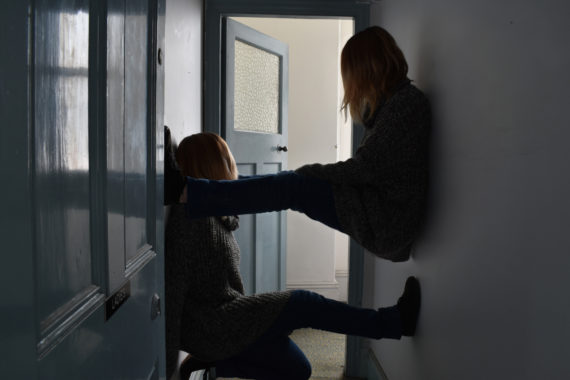 I am Amy-Lou Matthews and I am currently one of the artists on the six month graduate residency at AirSpace. I am in full swing into my second month on the residency with two exhibitions coming up in the next week to month.

So far on my time here I have been looking into sound effects, as my proposal for the residency was looking into the post-production techniques used in film and photography, to forget what your seeing is fictions, blurring the line between reality and fantasy.

So far I have been experimenting with recording my own sound effects and combined the use of images with the artificial noises produced. The images above are some of my experiments of using everyday items to produce certain sounds that reflect breaking bones and rainfall.

I am interested in using a images documenting the process of creating the sound with a image of the what the sound is intended while playing the recording between them both. Become a little playful with wondering what image has actually documented sound.

One my first month on the residency I took the opportunity to see ‘I Want! I Want! Art & Technology’ exhibition in Birmingham Museum and Art Gallery in early September. The show exhibited artists that have been influenced by the rapid developments in technology in the last twenty years. Here I was introduced to Rachel Maclean’s work ‘Feed Me’ (2015), where she explores with exploitations and sexualisation of childhood in culture in contrast with the immature behavior of adults. This hour-long film mashes several genres together, jumping from horror to reality TV shows. Maclean take on the role of each character with the use of prosthetics and green screen to compose herself into this hyper surreal world. I can not help but feel some connections, recognise similar elements with our behaviours, holding a mirror up reflecting an feverish version of our reality. For example where as a culture we can idolize celebs separating them from being a human being and more as a product to be consumed. 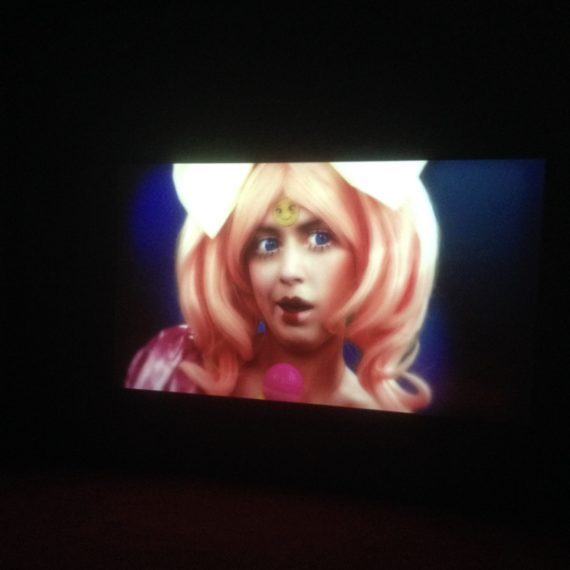 Later on in September I was able to visit artist lead spaces such as Blue Coat and Royal Standard in Liverpool. This was all arranged by New Art West Midlands, as away of connecting artist in this area and given opportunity to check out current projects artist are working on. Had the chance to see Abacus Exhibition in Blue Coat. The work exhibited all had the intention to inspire children into drawing, reading and making. Shifting the usual norm of a gallery setting, Blue Coat turned there show into the into a space where it allowed children to give into their intuitive nature through play. One piece that caught my attention was ‘Structures for Play’ (2017) by Emily Speed. This work consisted of several architectural spaces that would typically be for ‘adults’. These scaled down structure matching children proportions, are spaces that usually provoke a certain type of behavior while inhabiting them. These consisted of court, voting pole and chapel. These structures become quite theatrical, where children could take on the ‘stage’ as it were. 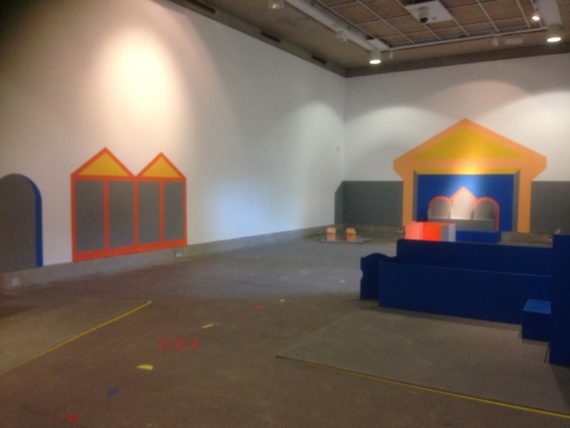 This piece has sparked off an idea of mine to create workshops that demonstrate sound effects later on residency with children. Show sound effects at play in video and how they are used to heighten a sense. Then create our own during the workshop, the use of everyday objects being manipulated to produce noises that can be used to create whole worlds and stories through the use of sound.

One event that is coming thick and fast is The Last Bus Exhibition, that is opening on the 13th of October. Is going to be one last big event for Hanley’s old bus station before it is knocked down. This space for many years would have been interlinking space, connecting many people in the area together while the station was running. The space had very mixed feelings about it from the public and this is chance for the bus station to end on a high, letting people recapture those few happy memories experienced there. This week I will be installing my piece, which is made up of six separate rolls of bus tickets unraveling.

As well as The Last Bus I also be preparing for the open studios in AirSpace on the 14th of October. This a day where the public are invited to have a look ‘back stage’ of what goes on in the studios. A peek into the space we artist test and push their ideas.

The next big push will be the interim show that Natasha Brzezicki (artist also on the residency) and I while be taking part. This work will look at giving a possible taste of what our shows may be exploring in late January 2018.