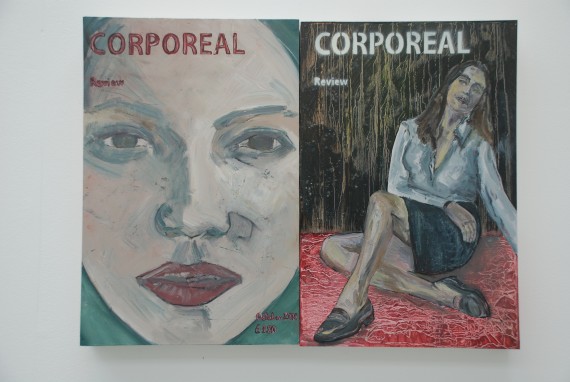 I was testing my 2 latest paintings in a crit group as per the intro image on which I am developing the theme of a magazine with the end game being to question how women, and I include myself willingly in this, buy into the multi-media message of women, to have a social value needing to be beautiful above all else and that this veneer of femininity and our increasingly sexualised society in which we are at best complicit.  I want to eventually by development of this theme poke fun at ourselves, not to cover the old ground of feminism but make a political comment on the irony of our self imposed limitations by using humour. Quite how I can go about this using slap lines is a work in development.

Anyway, the image on the right of the mock magazine was painted in oil very quickly in an hour or two wet on wet and it is that energy that gives it simplicity and dynamism, the overtly sexualised lips blood red and the red banner at the top.  It was described in crit. as Luc Tuymans in style so I had to admit, although I was aware of his work, he was not a painter that I had looked at in any great detail and if there was a natural link, then I had to look at it.

So cropping a found image may be an easy link to make but there are others as I found out.

My first discovery was that I mistakenly thought he was German given his historical subject matter of world war 2 references and national weight that this endorses upon the individual growing up in the aftermath of war, but he is in-fact Belgium (b. 1958).  His frequent use of source material from film, tv, print and other found materials is another link in terms of my current practice.

On the Tate video he talks about appropriating an image and translating this into the paint and how this becomes a different composition all together, referring to painting being on a ‘different time-span’, which I take to painting being a time based media, both in terms of its time of execution and the layers of depth taken from the resultant work upon the viewer as they visit the image again and again and another layer of depth is revealed.

I am also interested in his comments about the memory being inadequate which is ultimately frustrating and it strikes me there is a parallel going on here. If he is interested in memory, then his paintings, given their speed of creating are not true to life at all, but due to their minimalist, reduced white-noise simplicity, it removes the distractions of every day life until you are left with the bare essence of a thing alone and more and more I am coming to the personal conclusion that this is what painting should be about.

It tells me that I should keep going with the painting the figurative element in one-day as the essence of the figure may be enough, especially when I am transforming a glamourized image into a more complex multi-layered character using the paint to assist me in this respect by allowing the immediacy and rawness of the medium to have its say. 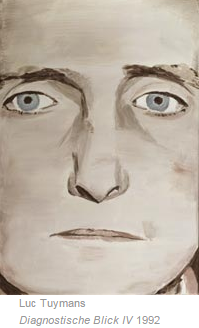