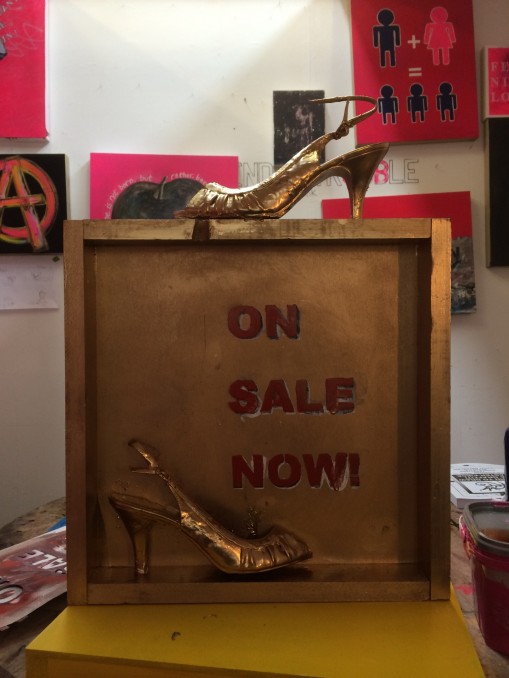 On friday I reworked the earlier piece using the spray painted shoes and reworked it as I felt it was not good enough for the show.  That said, I knew shoes as a metaphor for what women like and consumerism was a good one so, having just been gifted some gold spray paint which I had applied to a square MDF canvas speculatively, I realized that by reversing it, I had a shelf onto which I could place a shoe. The rest just naturally came after a couple of trips to use the saw in metalworking to cut the shoes in half so that they were not wider than the 2 inch mount for the MDF board.  It was quite fun to slice a shoe in half and see how they are made.  After taking so much trouble to spray paint the shoes pink many times, I decided in the end, that sculpturally, they worked better gold so they were turned back into gold shoes again which is somewhat ironic.  So I finally get to use the phrase ‘on sale now’ in a more appropriate way than last year.  It clearly says something about woman as consumer.  Quite pleased that I managed to turn this one around and taking the brave step of incorporating found objects into paintings.

Today I made a set from foam board of the exhibition area I want for the degree show. By doing such a mock up, and creating mini paintings on a scale of  1:19 of reality, it really has helped me confirm some layout ideas and raised other issues. So now I have the template, tomorrow I can play with the set design and test out some other ideas.  It has really helped me visualize everything and will assist greatly when I hand in my proposal.  That, and it was fun.