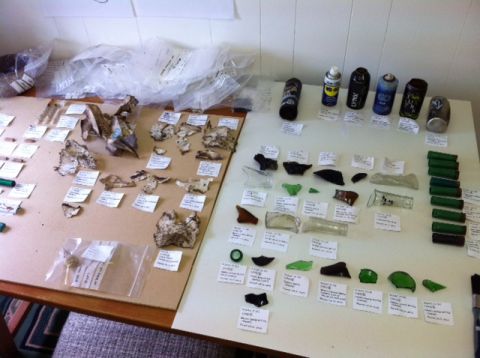 My piece Recordings from a Site of Minor Disorder, commissioned for the Letchworth: A Vision of Utopia exhibition is now up! It has been such a tight deadline from initial brief to now, that I have barely had a moment to pause. The new site, located very close to town, between the railway line and Station Way has been analysed, mapped, part ‘excavated’ and sound recorded and the findings are on show at Letchworth Town Hall until the end of April. There is also a site intervention left within the site itself.

And hopefully a chance to see the other two artists work that was also set up last week. Samara Scott at the International Garden Cities Exhibition and Johann Arens at the partly deconstructed Letchworth Museum and Art Gallery. And over the course of this month, eight more artists will be installing work across the town.

It is a fascinating experience, having the art come to you. Someone must have realised I’m not getting out much…

Also, although pushed for time, the realisation of this piece has felt rather liberating – I’ve been nipping off when I can steal a moment, to get lost in the concealment of this inbetween place. I’m starting to feel strangely rather more at ease within it, handling and analysing the ‘finds’ and the funny sideways glances, than I might have done in the past. So much so I think I almost bypass the knowledge that much of what I am handling is generally considered gross or completely mundane. It is just material.

I’ve left my mark in the site and am now not sure if I’m finding disorder or creating it. Walking away and leaving the excavation intervention exposed in the woods felt like something inbetween a weird act of self expression or unlawful rebellion, yet in the knowledge I ‘sort of’ have permission, somehow official. It also now feels vunerable to attack and I guess it provokes that response precisely. Does any form of order in a space claimed for disorder stand a chance?

I’ll head back soon and find out…

Working at A Site of Minor Disorder, Letchworth Garden City