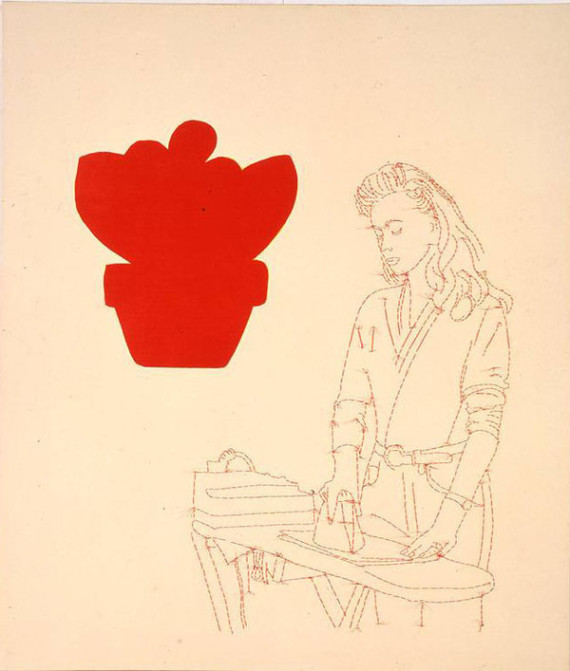 Ghada Amer(b1963)
Ghada Amer was born in Cairo Egypt and moved to France as a child and them went to live and work in the USA.
I have looked a lot at Ghada Amer in the past as I can relate to her work and connect to her techniques and use of materials ,however this is where the connection ends as her subject matter does not resemble my work.
The strong messages and visual language interests me as does her her own background which contradicts the strict traditional female roles of Islamic culture.
Much of her work is very large canvasses containing images drawn from pornography,she used brightly coloured acrylic paint using mainly primary colours and stitches over them with embroidery leaving the threads seemingly hanging down although this thread is coated in clear resin and stuck down onto the canvas.
The series of work ‘Five Women At work'(1991) is not phonographic images but looks like illustrations and a portrayal of women working at mundane tasks so often seen as traditional female roles such as cooking,cleaning shopping and childcare.The work was a series of four canvasses and not five the fifth was the invisible Amer the maker busily stitching and creating the work.

As well as actually sewing I have also been working on a series of paintings with connections and continued narrative around textiles and autobiography .This piece is a large acrylic on canvas quite textured in places, but I also tried to show a more delicate chiffon fabric of the sleeves.Some of the texture on the cloth is used by stencilling over lace with heavy body paint (a technique I discovered in previous experiments with other work)I then used wax over to add texture and sheen to the canvas.The work is titles little fat dress which is a play on words and a humorous take on the little black dress ,the fashion classic only plus size, taking a critical look at attitudes to women and the feminine ideal.The painting was based on a dress owned my me in my’fatter days’ but I did make the dress larger than it actually was!

I am working on one of my latest projects which is a mixed media piece.It contains a collection of paintings (appliquéd onto a vintage army jacket.The jacket will contain a narrative using words and pictures of the life of my grandfather during World War Two when he served in the Royal Maritime Artillery on the artic convoys.My whole collection of work includes paintings as well as sewn pieces. My work at first glance might not appear to be connected and I am slightly concerned it may seem random, but it is very much connected and is personal to me and my life but I am hoping that they will be interesting and that other people can relate to the work.We are I feel connected to cloth in our daily life. Textiles do tell many human stories.
0 Comments 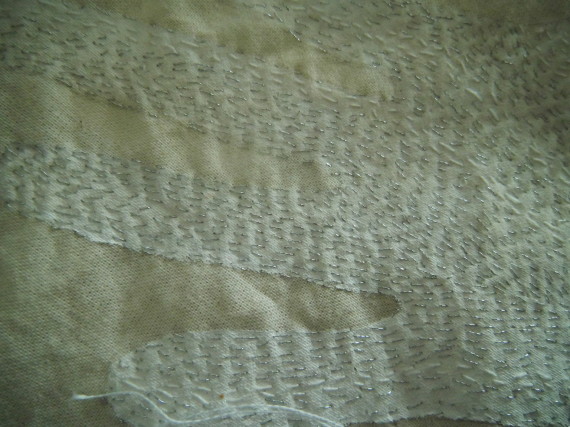 This is a piece of work I did last year where I painted two pairs of gloves onto calico in white acrylic and then stitch in very small stitches in different shades of white(yes there are many) and silver metallic embroidery thread.The photograph was taken before it was framed and put under glass so unfortunately photographing the framed work does not have the best results.
The subject matter is continued with gloves ,an item of clothing, textiles and sewing.The piece is very pale and supple on first viewing and requires the viewer to go up closer the really see the work.
0 Comments

I have been a little slow making a start with this blog but it is a case of having to make myself make a start .I already have began this blog but due to my talents with this sort of thing my previous work has somehow not published and maybe I am talking to myself now.Well now onwards and upwards and down to the work in hand.

My work is highly influenced with cloth , textiles, and crafts many this is because it is all about memory, my childhood and my upbringing surrounded by women who sew.My mother was( and still is but retired) and my aunt where tailors(I don’t like the term Tailoress ) , both trained at an Italian tailors manly making suits but occasionally ball gowns and wedding gowns.However I would not call myself a textile artist and would consider my work eclectic ,using many mediums and a person who didn’t know looking at my work would probably think the work was from several different artists but following a similar theme.

I am at this present moment working on acrylic paint on canvass and stitching over the paint. The back of the piece is equally as interesting as the back and I am trying to find a way of displaying the work so that both sides can be seen as I think some of the detail and interest can be lost in traditional framing methods.

I have looked at many artists,some connected to cloth and textiles some not and some like myself use textiles and stitching as just on of the mediums they use.Some artists i have looked at and will discuss them further in this blog are Tracey Emin(I know a lot of people talk about her but as a tutor once told me she cannot be ignored!)Ghada Amer,Michael Radecker,and Shirrin Neshat just to mention a few.

I think there has been a revival in stitch as a craft in recent times by both artists and crafters.Perhaps with the popularity of blogs promoting homecrafts with ‘mummy blogs’ and lifestyle .This could be a good thing but I feel that somewhat promoting the domestic image (Not a criticism of people’s individual choice I would like to add)of apron-wearing ‘stepford wives’ ,shoving cupcakes(actually fairy cakes ) at people then hitting the Prozac and red wine behind closed doors and net curtains .However stitching can have a more edgier image as I have mentioned before artists such as Tracey Emin and Ghada Amer regularly use the medium of stitch in their work.