I like to record my paintings as they are made.This work is part of a body of work which goes with the other acrylic on canvas I have featured on this blog titled ‘little fat dress’This painting of a dress is completely the opposit of the black dress it portrays a glamorous dress for presumably a slim glamorous young woman(actually it is modelled from an actualdress belonging to my son’s girlfriend)The subject matter broaches the subject of women never really being happy with themselves no matter how beautiful,young and slim they are,just as the owner of the oversized black dress would feel.The painting holds a secret that not everyone would notice,the spots do not perfectly line up in part of the painting and also it may be noticed that there are belt loops but the belt is missing as something might be missing in the feamale owner such as confidence.
0 Comments

Eva Hesse was a German-Jewish artist/sculptor known for her work in materials such as latex, fibreglass and plastics.She lived in New York from an early age. Her individual style first appeared in her drawings shown in her drawings ,shown in the early 1960’s in her first one-woman exhibition at Alan Stone Gallery in New York(1963).During a year spent in Germany,she constructed and exhibited 14 papier-mâché reliefs with chord wrapped wires embedded and protruding from them.
At the kunstkalle ,Düsseldorf ,among these exhibited works were ‘Tomorrows Apples ‘1965.In the years before her early death,Hesse’s sculptures grew in scale and changes from easel sized reliefs to ‘Expanded expansion'(1969,New York Guggenleilm)whose latex covered cheesecloth’curtains’draped between16 plexiglass poles.
Although not a textile artist(nor am I really!)in particular I can link the art of Eva Hesse to my own work.The textures,colour and thread-like materials and processes take on the look and texture of textiles particularly some of her larger installations such as expanded expansion.
0 Comments

The work for my final project is taking shape in the form of paintings/Stitch and a mixture of the two.One of the pieces I am currently working on is a vintage army jacket and according to research is probably a battle dress jacket(I’ve seen them on Dad’s Army so maybe I am right!)used by the Royal artillery as well as other regiments.As the photographs show , some of the paintings appliquéd are of an albatross,based on one of my Grandad’s stories of his travels and ordeals on the Artic Convoys as a soldier in the Royal Maritime Artillery.
The appliquéd albatross painting as well as the small ship painting at the back of the jacket is painted on calico in acrylic paint enhanced with a few stitches in silver metallic thread.It was then fused to the material using a hot iron.The stories and words will be continued to be stitched around the images.The other images of ships also include an image of one of his actual ships he sailed on HMS’Archer’.These images where a technique I have been working on by experimenting by glueing prints onto fine muslin fabric(white)and then allowing the PVA glue to dry overnight.The images were then ironed to straighten out the wrinkling and they were then fused onto bondaweb before ironing down and stitching onto the fabric of the jacket onto the sleeve.This was first practiced on similar weight fabric to see if it looked OK and also if I could get a needle through it(see photographs) I wanted the images look like fabric and not as if I was using paper.This seems to have worked well.
The work is slowly taking shape,slowly because it takes a lot of time to stitch the images,but mainly the wording onto the fabric.The work is partly resembling the picture I have in my mind, but having said that I do n to really know what the end result will be which is all part of the pleasure of the creative process.
0 Comments 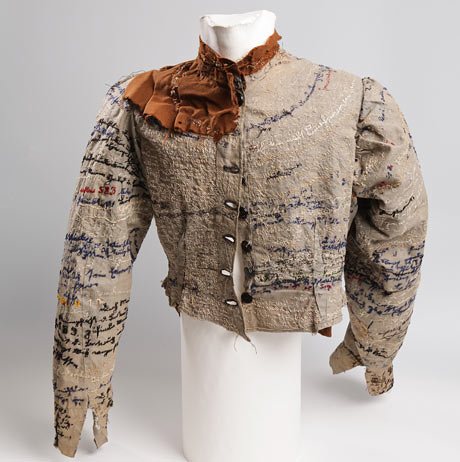 During the Victorian era in Germany,an ex-seamstress and an inmate in an asylum,Agnes Ricter stitched into virtually every inch of the jacket she created from her institutional uniform.Agnes’s embroidered writing was so profuse that much of the text was hard to disinherited.Prases such as’my jacket’ and ‘my white stockings’however can be seen clearly.The piece of work is deeply personal and also obsessive.
The jacket is part of the Prinzhorn collection at the university in Heidelberg in Germany which holds more than 5,000 works created by patients in psychiatric hospitals in the late nineteenth and early twentieth centuries.
0 Comments

Michael Raedecker(B.1963)
Michael Raedecker is a Dutch artist currently living and working in London.He first trained as a fashion designer studying at the Gerrit Rietreld Academies,Amsterdam and at the Rijksakademie ,Amsterdam before retraining as an artist at Goldsmiths College in London.His background in fashion has obvious influences in his later work as an artist.He combines thread with paint.His paintings often dark and atmospheric ,sometimes hint at the Dutch still life paintings and also subjects such as landscape and subjects such as garlands of flowers.Much of his work has a unsettling uneasy feeling about them.
I find it interesting that his earlier life as a fashion designer does effect his work as an artist and actually fairly obvious that his skills he leaned in fashion were utilised later on in his work.I can also relate to this myself and my early influences as a child growing up with my mother and her work as a tailor , picking up skills from her and gaining an interest in sewing and fashion.This has definitely had an impact on my own work with the materials and techniques used as well as subject matter, and also the biographical side of my work which comes out as part of my visual language of my work.
0 Comments