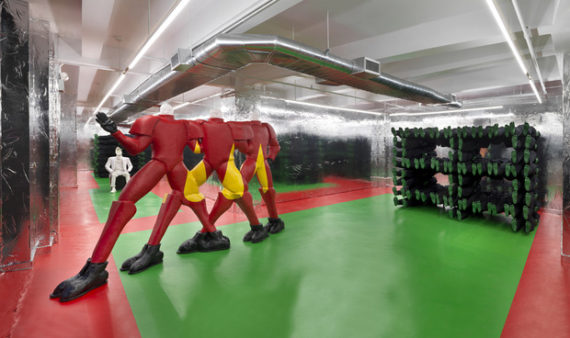 This was a really interesting day. I started with a visit to the absolutely magnificent Brooklyn Library. Brooklyn is a very large area with several sub-libraries but this is their main library.

Brooklyn Library was initially initiated in the 1800’s as reading rooms and the current building was opened in 1941, designed by Raymond F. Almirall. The entrance and other areas were redeveloped in 2005 to create a new auditorium.

Following this visit, I went to the Dumbo area of Brooklyn, which is nearer the Brooklyn Bridge. I went to meet artist Joseph Buckley, who did a residency at The Tetley, Leeds after me last year in their studio. Joseph is originally from Leeds but has married a US citizen following his MFA at Yale, and is now based in New York.

We met at his solo show, Traitor Muscle, at Art in General, which features really powerful sculptures and poetry within an installation and poetry, which was an extension of the work in his solo show at The Tetley.

It was really interesting to talk to Joseph about his experiences of working as an artist in New York. He lives slightly out of the city but supplements his income as an artist well by assisting artists. He finds it a supportive environment with artist peers with room to grow and experiment. Joseph also kindly introduced me to their director Laurel Ptak who is also running a residency programme, so it was really interesting to hear about their experiences.

Joseph told me about a few local galleries. I particularly enjoyed the work at Smack Mellon, which featured really incredible wall drawings/ collages by Paula Wilson in the show; Spread Wild: Pleasures of the Yucca. Equally really strong in the second gallery space was an exhibition of drawings and sculptural ceramics by Luisa Caldwell; A Cat in God’s Garden. A wonderful light and spacious exhibition space too. I really like the look of their programme and I will be following them from now on.

Following this, I looked at a few apartment buildings from the 1930s in Brooklyn which were very spread apart so I only managed t0 cover a 2-3. I took the train down to Coney Island, which as a seaside town enthusiast was recommended that I could not miss. Unfortunately, it was off season and mid week and this meant that all the attractions were closed. However, you could see the majority of the fun park, buildings and rides and could get a feel for the place. Despite the very cold weather, there was a lady swimming, brave!

In New York entry to large municipal galleries can be very expensive, especially coming from the UK, so most offer free entry at some point in the month to increase access for those that cannot afford it. Brooklyn Museum offers free entry every Thursday evening, and there is also usually a free talk in their atrium on Thursday evenings also.

Brooklyn Museum is a large art museum that has several collection exhibitions as well as touring and time specific shows. During my visit, I got to see the exhibition which was on tour from Tate; Soul of a Nation – Art in the Age of Black Power, and Half the Picture: A Feminist Look at The Collection. Additionally seeing the textile based installations by Perfect Home II by Do Ho Suh, and the Dinner Party by Judy Chicago was incredible. These were both artworks I have looked at many times in books and online, and it was such a wonderful opportunity to see them in the flesh to see all their detail and experience them in physical space.

The day was ended by meeting with Kari Cholnoky and her partner Dante, who is also an artist. They are both based in Brooklyn, and also supplement their income working as assistants to artists. I met Kari last year at The Fountainhead Residency, as she was leaving just before I arrived and I attended her open studio. I was really taken with her incredibly expressive sculptural work which comprises many objects, prints and paints in a highly textured collage-like manner.