The Whitechapel Gallery’s upcoming retrospective – Eileen Agar: Angel of Anarchy – curated by Laura Smith, was the first time I had heard the name of this artist. Considering she was a female surrealist, and the historical tendency towards muting the impact of female artists, this did not surprise me. The name of the exhibition itself is a lovely nod to not only one of Agar’s artworks, but a book of the same name Angels of Anarchy: Women Artists and Surrealism by Patricia Allmer, which examines this erasure in more depth.

Smith’s lecture included an introduction in the form of a brief biography about the artist. Upon hearing about her, it felt easy to place her as an extremely influential figure in the history of women’s art. Shaving her head to reject the expectations of beauty placed upon her by her mother and pursue her dreams of being an artist, refusing to pose for Picasso or become simply another muse amidst her male peers, and writing to deconstruct patriarchal ideas throughout the war and beyond, Agar’s near-century-long career contains a richness that is difficult to rival. Iconic tbh.

This is why, when hearing of Smith’s difficulties in firstly trying to build enough of a case to have this exhibition approved, it was so disheartening to hear that while working at the Tate her proposal was rejected multiple times, and in its current upcoming show at Whitechapel, the scheduled date for the show was moved from three years to three months, forcing Smith to seek alternative methods of curating in the height of the pandemic.

In the gallery’s justification of not showing a solo female artist’s works, it was mentioned that they feared it would not draw in enough visitors. It makes me feel as though despite the forward-thinking ideas that many museums have attempted to adopt recently, ultimately their focus will always be based on profit. Of course, the arts as a public sector are commonly known to be consistently underfunded, and I’m no museum director (just yet anyway). However, when you consider Agar’s seven-decade long oeuvre, experimenting in every possible medium she could and being centrally located in Europe at the height of key pre- and post- war artistic developments, you wonder how this show could possibly be anything but a success. If Agar had been a male artist, I doubt there would have been such hesitation.

I was hoping to post this blog to align with International Women’s Day last week – but in a horrible way I am glad I waited. In the past seven days alone, a tempestuous reaction of #notallmen, death threats and rape jokes were made in retort to any valid conversation raised by women about their safety within the world, and the multitude of names of victims that have been added to the never-ending list as a result of misogyny, racism, and intolerance have highlighted the ongoing necessity for feminism to continue to try breaking down these damaging attitudes.

Perhaps in light of these recent events, this is a key time for such a show to be happening. However, I can’t help but feel a bitterness that Smith was made to rely on a sense of community in order to source and bring together enough artworks by Agar to make a show. The banding together of an unofficial council of fans of Agar, beloved paintings that had been hanging in kitchens for years, and a collating of artworks that perhaps might not have been seen, feels far too much like a symbolic gesture of what women have had to do historically, simply to be seen. 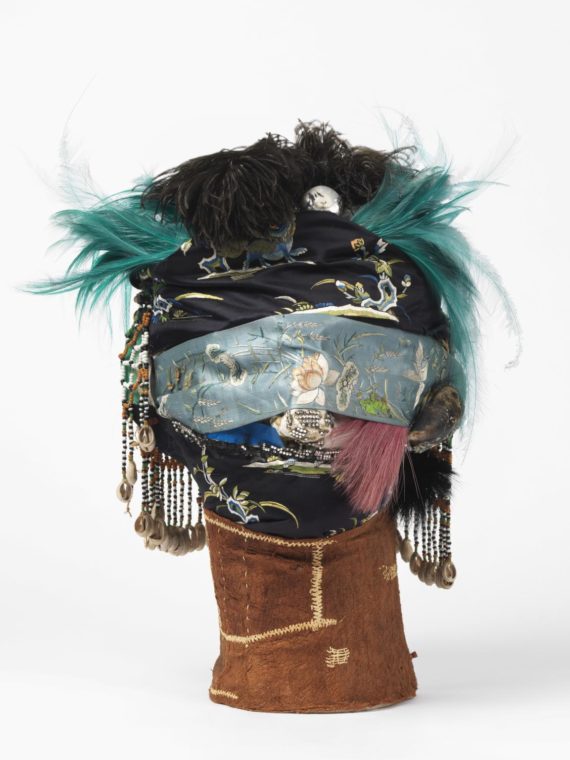 As a twenty-five-year-old with terrible circulation and a spine like a Jenga tower – in the sense that one wrong movement means I am resigned to lie on the floor for a while – I have usually laughed off these issues with the joke that I’m an old woman in disguise. This is problematic for two reasons. The first is that I am generalising older people as automatically less physically able simply because of their age, when this is not the case. The second is that I am lying – I am not an old lady, I am a twenty something with health issues. And that’s okay.

The thing about prejudices is that they are often born of fear or misunderstanding, and Eve Provost Chartrand’s multidisciplinary practise utilises this sense of unease that we have around ageing, disability, and even the end of life by confronting it head on. Her unwaveringly visceral, sometimes teratoma-like assemblages are borne out of sentimental objects from her grandparents, and her bacterial landscapes created by the organisms with which she shares her body help build a case for the capacity for creation that is present if one thinks beyond their own preconceived notions of what a productive ‘being’ looks like.

This challenging of the idea of the undesirable body – though centred around Chartrand’s personal relationship with her own position as an ageing woman – most definitely nod to a wider issue within the discourse surrounding such views of older and less abled bodies.

“Bioartworks challenge Western cultural and bioscientific imaginaries of sealed, self-contained bodies and the accompanying firm distinction between life and non-life, natural and artificial, and human and non-human.” [1]

There is no denying the sapiocentric view that has dominated the narrative of the modern Western world is intrinsically linked to the Capitalist attitude in which one’s worth is linked to their willingness/ability to participate within this societal model. Of course, this creates a culture of dismissal of those unable to partake to an acceptable level, becoming labelled as less-than-human, and therefore less deserving of respect. By integrating man-made medical objects like dentures or prosthetic legs into her organic sculptures, Chartrand is closing the gap between the harmful way of thinking that life ends outside of productivity and the ignorance of the vibrant world of living matter outside of our plutocratic centred sensibilities.

Part of the success of these works, to me, lies within Chartrand’s interdisciplinary account of each object she uses. Utilising poetry, sculpture, bio-art, and even performance – in her feeding of cultivated fungi to audience members – broadens the range for inclusivity by our potential to relate to some aspect of her works. Whether through the written words, the tactile nature of the assemblages, or the direct involvement of the viewer in the performative aspects of the works, ultimately, as human beings we all share at least some of the same experiences. So, it is not impossible for us to find something that resonates with us within these works, helping us to unpack the unconscious inequalities we may hold in our own way. 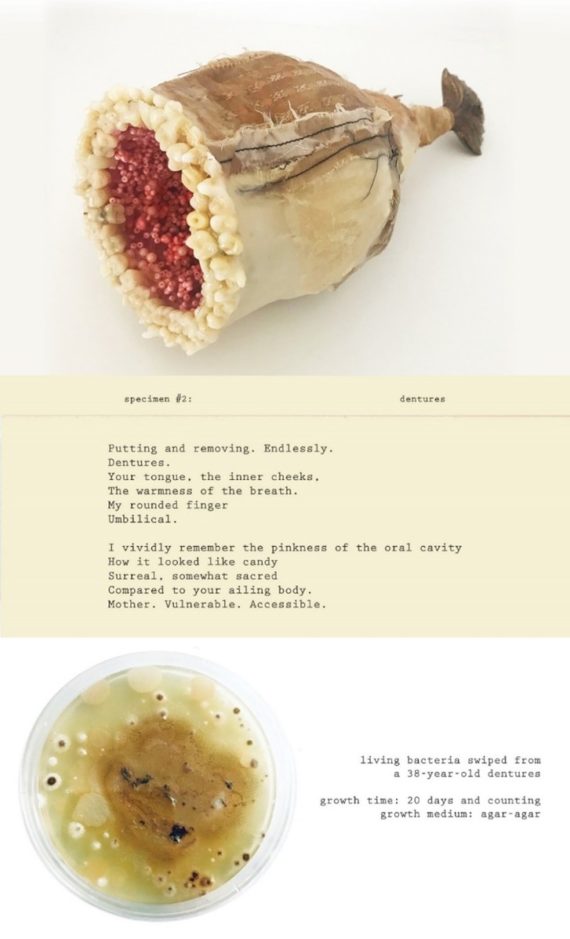 One of the questions posed when considering the issues of such a strongly human-centred mindset concerns how political responses to public problems would change if we were to take the vitality of nonhuman bodies seriously.[2] I am reminded of initial and ongoing responses to the current pandemic, and the dismissal of the deaths of elderly sufferers as something that was inevitable.[3] Of course, the subsequent blasé attitudes towards the virus and its capabilities have, at least partly, led us to a trilogy of lockdowns – because of the ageism that is so ingrained in our way of thinking.

Dissecting our internalised biases is often uncomfortable, and I think Chartrand’s awareness of this discomfort is magnified in her artistic choices; her fleshy, growing artworks lend themselves well to the hesitancy one may have to approach such subjects with their aesthetic strangeness. I just want to dive right in.