When I spoke to Kenn Taylor, of The Tetley, last month, he spoke about Bradford’s significant investment into public realm projects with their 2011 project ‘City Park’

The area comprises of a landscaped area with lawns, seating and large area of stone sets. The area is used as an exhibition and events space. The main feature is a mirror pool, which shoots the highest fountain in any British city. There’s a walkway over the pool, and at one end features 40 low powered play fountains encouraging children to play in the fountain. The pool is drained everyday, this is also a key aspect as the area is used for events.

“Very controversial at the time, a lot of people were against it. Why are the council spending all this money on this? Now, people now say that it’s a key asset to central Bradford, something that Leeds doesn’t have. A big open space that’s so engaging and flexible.”

We spoke about this in relation to the Dewsbury Road and Play Sculpture projects that The Tetley commissioned and how there was a desire from local councils for something that was useful, with benches, or something that can be used. These types of public sculpture are popular as they do more than one thing, and can engage many people, as does City Park in Bradford. 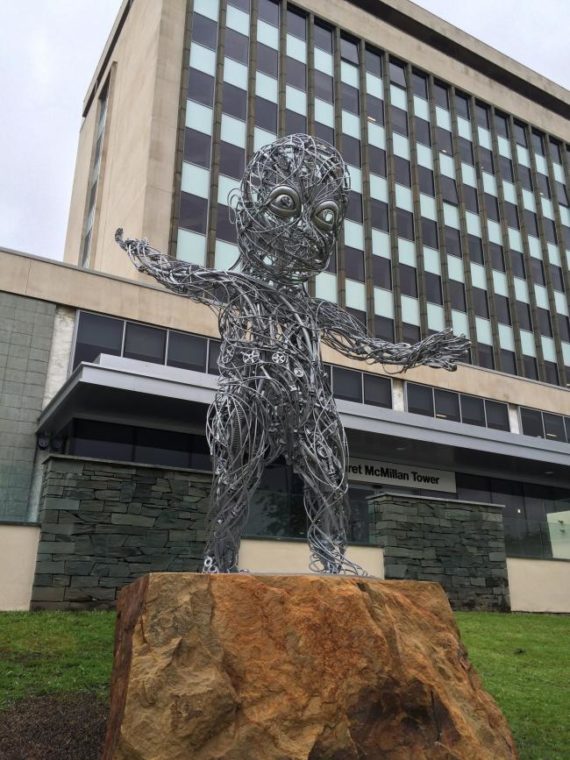 Whilst I have not researched much of Bradford’s history of public art and public realm projects, something caught my eye this year when a new sculpture ‘Baby of the North’ was unveiled. Or not, as it may seem.

Bradford City Council commissioned the sculpture entitled ‘Baby of the North’ which is a large, wire infant, with arms outstretched. It’s made form a thick silver metal with cogs and objects encased within it’s wirey frame. It sits outside the front of Margaret McMillan Tower, home of the council’s Children’s Services Department, and on a major roundabout in the city. It was created by Howarth based sculptor Craig Dyson.

The sculpture has divided opinion, with a large amount of people feeling negative towards this new addition to the city. Initially, it had no official unveiling which has also angered the public, adding to this feeling that it had been ‘plonked’ in the city. Local food blogger ‘Food Legend’ writes about some public opinions here.

Artist Craid Dyson, described it as ‘marmite’ but persists that when proper interpretation has been added that it will turn opinion. Apparently the sculpture has engaged over 1,000 local people, with them contributing to the design, which was made using old victorian looms, in reference to the cities textile heritage.

I don’t really hate it, in fact I did really like it. It’s not huge. There’s something different about it, but not so much that would offend the public (or so you’d think) I think it might be something that will grow on Bradford.