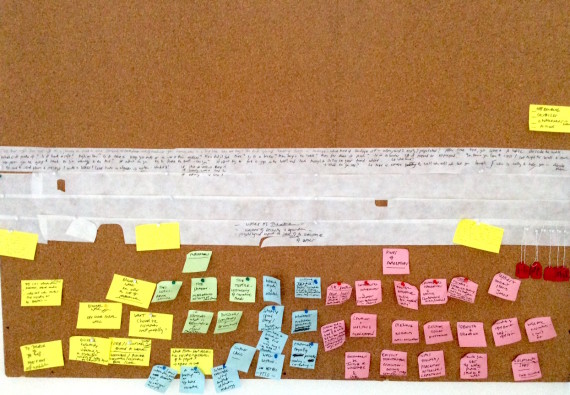 0 Comments
Viewing single post of blog Through A Wall

I have been struggling with trying to keep the threads of this project together and moving in one direction – not to mention being able to take the outside eye on everything and blog about it. I was reminded that this is still R+D and work going in a number of directions and having things half- finished or unresolved is part of the process. Up until last year, I was on a constant production rollercoaster for about 7 -8 years so have been adjusting to really occupying the R+D process, which is slower than I had wanted it to be in terms of seeing a way forward, but after a number of dead ends and re-routing  the path is finally clearing.

Already the entire form of the original project changed through being on the residency at Blast Theory this Spring, and now, as I have been engaging in and preparing for workshops, doing a lot of writing for the project and also a number of public events, it is shifting once again.

I have been writing and researching a collection narratives relating to site, loss, memory and displacement – my own  and others and the testing out of the narratives that are forming the ‘starter material’ for a future  live and digital work.

Firstly at an ‘In Conversation at  INIVA with Christine Checinska Shaw last month – podcast here –   and then at a Visual Arts and Philosophy  Salon event with Kings College philosopher Sacha Golob at Fernandez and Wells, Somerset House, podcast here ).

If you listen you will hear a couple of the audio narratives at the start and end I have written, sourced from my own experiences of walls, barriers and borders – which was a general metaphor I have stuck to as a framework because,  it was agreed between us that it seemed to bring cohesion to a project exploring memory, conflict and belief but which, as the project is taking another track,  is now proving limiting (more on why later).

The feed back to me, both at the events and in the one-to-one testing and dialogues I have been having, of reflections ideas and often deeply personal responses to the work – to new audiences – has been a crucial part of this process of trying to find the essence and framing of a new work that will fly and take it with me – and then the public too. There is something powerful, moving and provocative people take away when they listen to these  narratives and are asked to step into someone else’s skin for five minutes.

Also, hearing other  artists and non-artists describe, reflect on and unpick the different elements of my past and present work (ritual, materiality, transformation, social practice) has been invaluable and made me realise I am not just reaching in lots of directions at once and medium –hopping when it suits me (which I sometimes worry about)and that there is a clear reason for the trajectory my work has taken and the themes it seeks to uncover. Sometimes it takes outside perspectives to show you there is continuity in the work,  and a reason to keep unravelling it even when you have no idea where it will end up, and when you start to really question where the hell you are going with it.

I have also been preparing for our main public engagement work in Mile End, London in association with the Mile End Community Project for the end of the month, to do workshops, street work and an audio installation in July responding to issues around identity, conflict and territory. Its low key work to which only the local community will be invited, but which I hope a section of the work recorded will form part of the final online piece for this R+D. Last month we also did a workshop as a trio in Slough with  young people. It used the theoretical theme of the project as a starting point and we tried out both our own narratives and ways of listening and retelling narratives but on reflection the lack of site specificity and not knowing the group well or having developed longer relationships with them over time  highlighted for me the problematics of ‘drop in’ engagement on themes that are deep and often dark. I realised that longer term residencies and cultural connectors / gatekeepers who are on board with the project –  inside out – are crucial for anything really meaningful unless there is a strong conceptual or physical framework in place, as a mediator.

Because quite a lot of the work of the themes I have been working with are about cultural hybridity, displacement and belonging, I have been in conversation with people who have first-hand experiences of refuge and conflict, of which I only have second –hand personal experience, as someone both in the UK, though with a migrant mother and having family and my own childhood affected by the fallout of the Iranian Revolution (contained in some of my stories).

I have become aware, especially through one of the interviews I did with a young man who recently arrived here from Syria whom I met through the Welcome Refugees – that I have to tread very carefully when engaging with people with first hand experiences of trauma, displacement and conflict –driven violence. I am not a trauma counsellor or social therapist and it feels unethical to go seeking stories from people, unmediated, who do not have the distance or are still reliving experiences which fill and often disable so much of their daily interactions and attempts to land here. There needs to be something between myself and them that serves as a bridge and I don’t have it yet. The Book of Debts performed this function, it was a third space through which a connection could be made.

The best people to narrate their experiences are refugee artists themselves, and this is exactly what I found on Saturday when  I went to LIFT Festival’s On The Move at the Royal Court Theatre –  a brilliant day of new works – new audio, installations, live and film works – responding to the refugee crisis and mainly authored by artists with experience of refuge and asylum.

I sat in Limbo of the White Sea, a moving ‘miniature museum of migrations’ by Lebanese artist Maya Zbib, among it I found stories printed on fabrics draped over makeshift dorm beds, music from her Lebanese childhood and a pack of cards filled with quotes and handwritten invitations to question a stranger with, on memory, displacement and refuge.

I watched Haunted, a paired down and skilfully intercut series of interviews with three sets of people in Syria/Lebanon on the verge of fleeing their homes: packing up, reflecting on what is to come and of what they know they are losing. Some profound reflections and perspectives on how much our identities are bonded to the places we grow in and the reluctance to lose that part of the self that may never be recovered. So much media around refugee stories is of people stripped bare and helpless, and often dehumanised. This gave full context to just what is given up and the fullness of a life then utterly devastated and displaced by violence and also how resilient and surreally good humoured human beings can be, in the face of crises. I remembered stories like these at the time of the earthquakes in Iran and during the Iran – Iraq war.

I went for a binaural audio walk in Another Place, by Doha Hassan and Victoria Lipton mapping out and intercutting sometimes brutally honest experiences of exile and displacement between London, Berlin, Beirut and Damascus and overlaid with a narrative relating to the immediate area, the route leading you ultimately to the deserted Syrian Embassy , via a 30 minute route from the Royal Court Theatre  (see image).

The sense of solitude and the intense, shifting space of cultural liminality struck me, as, appropriately, I walked the streets – alone – in the rain –  listening to the piece. Powerful. You can download and listen on sound cloud here.

But the work which moved me the most, perhaps because it involved touch, was ‘As far as my fingertips take me’ (Tania el Khoury in collaboration with Basel Zaraa). It was advertised as ‘A conversation through a wall between an audience member and a refugee. Sharing stories of people who have recently challenged border discrimination which can be kept or washed away.’ . Which obviously caught my eye because of our project title. But it was a different kind of conversation. You sat behind a wall with headphones on and lyrics of a song about seeking safety over the sea just in front of you. You put your arm through a hole, with your sleeve rolled up. Basel, the artist, took your arm and, as you listened to him introduce the song he has written and then it played, he started to tenderly tattoo your arm and palms with a series of drawings (see image). A line of figures carrying loads and children along the arms, a capsizing boat with tiny people in it in the centre of the palm, and a line running up from the boat up to your fingertips. Then every fingertip, the stamp of identity, blackened.  Maybe it was the feel of him blowing the makers dry or the emotionally moving content of the song and its refrains… ‘we just want what you want ‘ that made me cry. Or the simplicity of the act of connecting through a wall.

At that moment I realized that I have spent almost a year and a half trying to see anew and make fresh the ‘wall’ as a centerpiece of this project and what I am coming away with – both in my own and other stories and in all the work I saw that day – is about loss of place, not about division of place. I need to work with loss more overtly because I am gifted at it. Also, because I haven’t been working site specifically, as I have so often done , it has become disembodied and I have experienced great frustration in trying to make the narratives that are emerging ‘fit the theme’ , the  duality of a structures that divides and separates – and are everywhere! – when what I want to do is rematerialise spaces and structures of all kinds, connected not just to displacement but to losses of other kinds –  that create reconnection.

So when I woke up on Sunday a new idea came – which is a natural progression of all of the R+D but also drops –for me – the burden of the ubiquitous metaphor of the Wall, the border and the barrier – but will definitely include a number of them within it. In fact, the first narrative begins with a wall of my own.

I will write about this new idea next time. It is as if I have finally aligned. I am so relieved to have found a fresh way forward.

But on the note of loss, I’ll mourn the further loss of  family, friends and safety LGBTQ communities are feeling in the USA and beyond right now :(