Got up, packed, wrote a secret thank you note for my hosts to find after I’ve gone which I left in my room (I wonder if they’ve found it yet?), and went downstairs for breakfast. David was up, Lily joined us soon after. I had croissants and toast again with a fresh pot of tea. When it was time I gave my thanks to them and said my goodbyes before heading over to ChapelFM.

We spent most of the morning collaboratively working out Ground Rules and the expectations we have of one another within the UNION programme. I found that to be a really good process, to be honest – we had time to go around to UNION team leaders and make suggestions for each of the five main programme ‘headings’ [Weekend Residencies, Coaching, Support, Learning Culture, and Journals] which we would then whittle down to the main/encompassing points. We all didn’t get around to all of the points, but the fact we all trusted one another to get it right between us says something, doesn’t it?

We then got back into our Seacroft Project teams to continue developing an idea. On the Saturday, our team came up with The Factory, an idea which channels antisocial and destructive behaviours into the acts of creation and skill swapping/development. It’s a winner, I must say; we called ourselves Team Smash, because our mutual confidence in the concept made us feel like we’ve ‘smashed it’. We already had the idea from yesterday so we spent the time today just fleshing the idea out and working out the process of how we would implement it over ten years considering purpose, finance, engagement, the principles of asset-based community development and community ownership.

We had lunch (beautiful, again! Thanks to all those who contributed with the making of it), returning to present our ideas to the others. Some had really good presentations (news reports and raps and all sorts) about good ideas (shipping containers and community markets) but my group despite having smashed the concept, made the mistake of getting me to lead the presentation haha. Nah, I’m being too harsh, our presentation was good – between us we got the point across and I think the written flipchart sheet explained points relatively well? Personally, however, I can find it difficult to explain complex ideas that I’m excited about at the best of times (can’t get it out quick enough), let alone to a massive group! We shared reflections and feedback on one another’s ideas and Adrian raised some great points about failure (that it’s ok), the voice of the community and the need for breathing/learning/development space.

Without going into too much detail here, this collaborative task made me think a fair bit about both my strengths and the areas that I could develop in both practical and interpersonal realms.
Speaking of reflective journals, the questions Chris offered were:

We did an awesomely cheesy group shot (good shout Ross!) after we all generally expressed how ‘gooey’ and ‘squishy’ and ‘optimistic’ we felt. 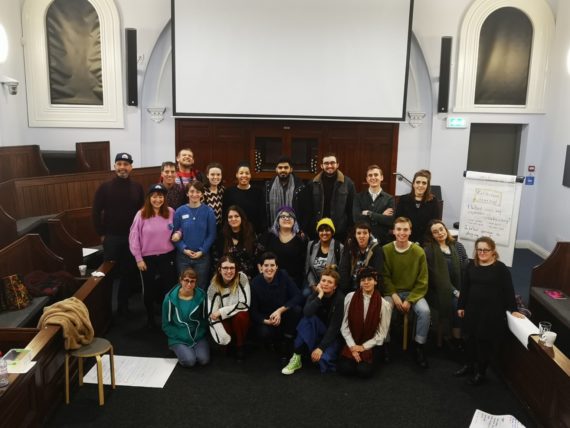 Steve came back in the car to Hull with me, and we had a good chat about his work with the kids and his music for almost the whole way home. Steve suggested the 4 Hully gullys maintain regular contact and go for a coffee or something in between the residencies, which I’d really like. The group are already sharing resources and reading lists and things on Basecamp, which is fantastic and is something I find myself already appreciating.

The other half and the cat were pleased to have me home, and it wasn’t long before I passed out on the sofa.

I’ve had a lot to think about, and it’s all noted down in my reflective journal.
Some of the things I’ve found myself thinking include:

I’ve had a blast of a weekend, and I’m still honoured to have been picked to share this adventure with 19 other wonderful people and UNION leaders Adrian, Linda, Chris, Sara and Vickie (although I’ve not met her yet) and all the others I’ve met so far on this journey like Katy and Lily and David and everyone else. I’m looking forward to meeting up with my fellow Hullians at some point soon, engaging with my first coaching session from Vickie and following up on the intellectual and conceptual leads that have been presented to me in Seacroft… all before the next weekend residency in April!

What a year this is going to be.