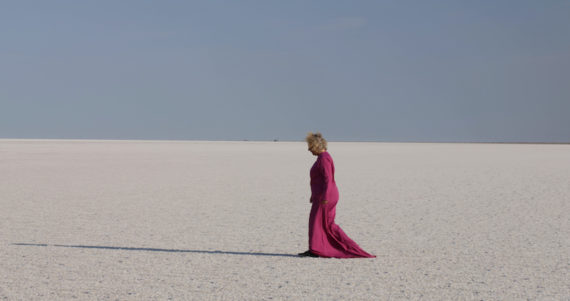 Helen Kirwan will unveil a new video installation, perpetuum mobile (2019), at the European Cultural Centre in Venice during the 58th Venice Biennale, as part of the ‘Personal Structures’ exhibition curated by the Global Art Affairs Foundation. This is the final chapter in a trilogy of video work by Kirwan, exploring mourning and memory through the physical act of journeying. The artist will also present a series of live performances in Venice during the biennial, in collaboration with the award- winning Dublin-based composer Tom Lane.

This year, Kirwan’s work will take up the entirety of a large room on the main floor of Palazzo Bembo, a restored 14th century palace on the Grand Canal. Upon entering this room, visitors will be immersed in the video’s large screens with a soundscape composed by Lane. The building’s Venetian-Byzantine architecture, with influences from Moorish Spain and the Gothic style of mainland Italy, echoes the confluence that is present in Kirwan’s work.

Kirwan’s performances for perpetuum mobile were filmed in remote outdoor locations: the ancient cedar forests of Lebanon, the Ustuyrt Plateau and Aral Sea of Uzbekistan, and the Frisian island of Sylt, Germany. Cedar trees were considered immortal in the ancient mythologies of the Mediterranean. Kirwan’s walk through the seemingly endless cedar forest creates the illusion of an infinite loop, which echoes these myths. Meanwhile, in the Aral Sea, Kirwan trudges through a vast bed of dried sand, that was once the world’s fourth largest lake, as if condemned to walk the earth forever. On Sylt’s distinct shoreline, shaped by the intertidal Wadden Sea, the artist appears to teeter on the edges of the earth, as if contemplating her own transition from life to death in terms of putting out to sea, as in Lord Alfred Tennyson’s poem ‘Crossing the Bar’ (1889).

For Kirwan, walking is a form of marking time and travelling through time. By walking across these landscapes, the artist partly draws on the biblical and mythological narratives of epic journeys, which she fractures through the film’s montage. The scenes are punctuated by underwater performances, which sees the artist plunging into water from the dissecting lens of a high speed camera. The Sylt scenes also echo Kirwan’s earlier performances on the beaches of Kent.

Kirwan’s work draws on her own experience of mourning the loss of a loved one. ‘My journeying is the performance of keening; and of the searching and yearning which some psychologists identify as essential to the bereavement process,’ she explains. She cites Giuliana Bruno’s book Atlas of Emotion (2002), which conceives of journeying as a haptic, emotive terrain, which corresponds to metaphors for wayfinding and mapping.

Repetition also lies at the heart of perpetuum mobile and Kirwan’s video work. The installation draws on the Hegelian concept of memory as repetition that constantly reinvents itself. The philosopher Simon Critchley views Hegelian memory as a ‘a wheel that turns, returns and turns again […] a kind of perpetuum mobile, a permanently recreating and re-enacting loop.’

perpetuum mobile’s repetitive variations are echoed by Lane’s music. This is composed of a series of short loops derived from a recording of the German baroque composer J.S. Bach’s Prelude in C Major BWV 846 to create a sense of perpetual motion. “The piece is constantly moving but never progressing in a conventional harmonic sense,” Lane explains, “The music develops slowly using minimalist phasing techniques and textural manipulation.”

Kirwan’s trilogy includes the films Fragment and Trace (2015) and Memory Theatre (2017), which were also unveiled at the European Cultural Centre during last two editions of the Venice Biennale.

Details for the ensuing live performances will be announced soon.

Helen Kirwan is a British – Irish conceptual artist. Born and partly raised in Ireland, she now divides her time between the UK and Brussels. She practised law as a barrister in Dublin and London for nearly twenty years before becoming an artist full time. She has a B.A. (First Class Honours) in Fine Art from the University for the Creative Arts Canterbury (2000), an MA in Fine Art from the University of Middlesex (2002) and an MA in Aesthetics and Art Theory (2004) from the Centre for Research in Modern European Philosophy, London.

Kirwan’s videos, video installations and performances which include ‘Memory Theatre’ (2017), ‘Fragment and Trace,’ (2015) and ‘Image of the Road,’ (2013, with Simon Pruciak) have been exhibited internationally including at the European

Kirwan has worked for many years with the award-winning Dublin-based composer Tom Lane and cinematographer Simon Pruciak. She conducts live performance- experiments, including an outdoor performance on a beach and in the sea during the Folkestone Triennial Fringe, UK (2017), and a performance with live sound by Tom Lane and a five-channel-video installation at The Space Arts Centre, London, UK (2018).

Kirwan has contributed papers and film screenings to a number of interdisciplinary conferences and has lectured and taught contemporary fine art criticism and theory at UK universities including the University for the Creative Arts, Canterbury, UK.

Tom Lane is a composer, sound designer and multi-instrumentalist living in Dublin, Ireland. Born in Bristol in 1984, he studied music at Balliol College Oxford, composition at the Royal Academy of Music, London, and composition and experimental music theatre at the Berlin University of the Arts.Tom has been nominated for an Irish Times Theatre Award on 5 occasions, most recently Best Soundscape for Whitby and Best Opera for Front of House in 2018. Recent work includes composition and sound design for Yaël Farber’s Hamlet and Annabelle Comyn’s Look Back in Anger at Dublin’s Gate Theatre. In 2018 he also composed music for choreographer Hannes Langolf’s new physical theatre piece Unruhe at Theater Trier as well as Backstage, a new opera commissioned by Cork Opera

Notable performances in 2014 included HARP | A River Cantata as part of the Tiger Dublin Fringe and Twelfth Night directed by Wayne Jordan at the Abbey Theatre, Dublin. His work on Between Trees and Water with Painted Bird Productions was nominated for an Irish Times theatre award for Best Sound Design. In 2012 a newly conceived version of his opera FLATPACK directed by Conor Hanratty was nominated for Best Opera Production by the Irish Times theatre awards. With Bryan O’Connell he created the music for DOGS by Emma Martin Dance (winner of the 2012 Absolut Fringe Best Design and Best Production awards). Tom Lane is the inaugural recipient of the Seán Ó Riada PhD scholarship in composition for theatre at University College Cork and a 2016 Next Generation Bursary from the Arts Council of Ireland.