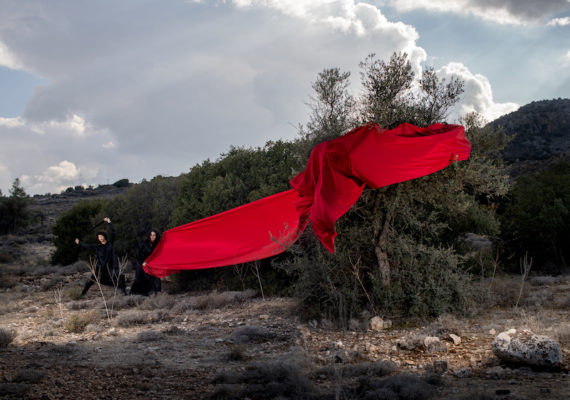 Kirwan’s quiet, meditative performances and multi-channel video installations are characterised by explorations of concepts of memory, loss and time; also journeying as the poetic and metaphorical construction of memory. Grief-Work continues her meditation on these themes but on this occasion, she has specifically taken inspiration from the mourning traditions of ancient Greece and the Middle East: also instead of performing solo as she usually does in her videos, she has Included additional and diverse live elements such as nine actors, a choir and even an animal, a Cypriot donkey.

Kirwan’s installation will take up the entirety of a large room on the main floor of Palazzo Bembo, a restored 14th century palace on the Grand Canal. Upon entering this room, visitors will be immersed in the video’s large screens with a soundscape composed by Tom Lane. The building’s Venetian- Byzantine architecture, with influences from Moorish Spain and the Gothic style of mainland Italy, echoes the confluence that is present in Kirwan’s work.

Grief-Work shows the artist as a character on a metaphorical journey encountering performances by others of rituals inspired by the funerary scenes depicted on white-ground Lêkythoi vases. Popular grave gifts in Athens in the 5th century BCE, these are known for a delicate painting style depicting rituals such as dedicating gifts, pouring libations and decorating graves combined with emotional expressions of sadness and of mourners nourishing the deceased and their memory.

Kirwan also draws on her own experience of mourning the loss of a loved one, the seemingly endless journeying in her work evokes a form of searching and acts as a metaphor for wayfinding and mapping and attempts at navigating the wilderness of bereavement. Walking is also a form of marking time and travelling through time. Grief-Works explores temporality and our perceptions of time as Kirwan walks across landscapes echoing the mythological narratives of epic journeys which she fractures through the film’s montage.

The character oscillates in a multiplicity of existences and experiences, seemingly teetering on the edges of two spheres as if enacting her own transition from life to death. Although she appears to be on a chronological journey- and this illusion of linearity is reinforced by the time-based media- her simultaneous encounters are boundless, endlessly taking place, unfettered by time and space. Lêkythoi vases depict also changing Greek attitudes towards dualistic notions of time: chronos being the ordered, measurable and uniformly flowing time, and kairos being its qualitative counterpart, signifying not just any time, but the fleeting instant of the now. The character is epitomising the empirical and tangible nature of kairos, informed by human experience and subjectivity.

The outdoor scenes, filmed in the foothills of a remote part of the island of Cyprus punctuated by material filmed in the studio are synthesised into a fragmented but interwoven repetitive structure. Grief-Works repetitive variations and sense of infinite motion are echoed by the inclusion of chant performed by the Byzantine choir of the Holy Metropolis of Limassol, Cyprus, ‘Romanos the Melodist’ under the direction of Nikolas Lymbourides. Chanting echoes many mourning traditions around the world and its continuous rhythmic flow has been skillfully integrated into the overall soundscape by Dublin based composer Tom Lane which accentuates the complexity and sense of poetic gravity of Grief-Work.

Grief-Work is underpinned by Kirwan’s inquiry into the German Romantic philosopher Friedrich Schlegel’s radical concept of the fragment as a dynamic practice which aims at fragmentation for its own sake. Intrinsic to Kirwan’s reiterations is an essential incompletion which is itself the mode of fulfilment. Her work draws also on the Hegelian concept of memory as repetition that constantly reinvents itself as a permanently recreating and re-enacting loop.

Grief-Work echoes Kirwan’s performances in earlier projects, especially her film installations in the Memory Theatre Trilogy: Fragment and Trace, (2015), Memory Theatre, (2017) and perpetuum mobile (2019), and live performances on beaches in the UK and Cyprus.

The artist will also present two live performances at Palazzo Bembo on:-

For further details of the performances please follow the LINK.

More information about Kirwan’s work can be found at: www.helenkirwan.com