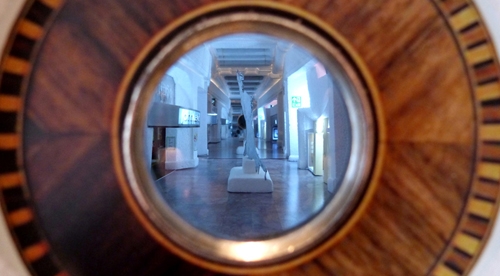 The four police cells of The Old Police Station, Deptford, London, host Alison Berry’s solo show Smell the Porridge. The show title is an alternative to the phrase “wake up and smell the coffee”. Whimsical and humorous, the sculpture and site specific installations are underpinned by philosophical concerns.

The installation Transubstantiation presents revelatory potential through the simple illumination of a pianola roll. The music on the roll is Wagner’s opera Siegfried Passes through the Flames 1876, during which the hero Siegfried falls in love. Normally associated with the Christian doctrine of the conversion of the body and blood of Christ into bread and wine, this installation gives prominence to transubstantiation’s more prosaic definition of a change in the character, form or state of something.

On a more humble scale, in another police cell the installation Gaps consists of an inmate’s postcard collection recording snapshot memories. In An Artist’s Lot, a hopeless but beautifully drawn escape plan is a clear analogy for personal ambition.

The last police cell contains two sculptures that invite interaction. For The Tower, one has to kneel down in order to look through a peep hole and see inside. The unwitting voyeur is rewarded with the view of a model shopping mall atrium soaring upwards. Inside the second sculpture Suspension of Disbelief, a shopping mall can be seen stretching into the distance with an eternally repeated exit sign pointing ahead. There is an extreme contrast between the hyper-real consumerist interior and the low-fi exterior of these sculptures where all the tape, polystyrene and wires required to construct the interior are deliberately left visible. Quirky, theatrical and tapping in to the pull of the miniature diorama, these sculptures form part of Alison Berry’s exploration of the delights and absurdities of life.

A recent graduate, Alison Berry has had several group shows in London and the Southeast including the Paper Works collaborative project sponsored by a-n. Smell the Porridge is her first solo show and is curated by Alison Berry and Sarah Wicks.