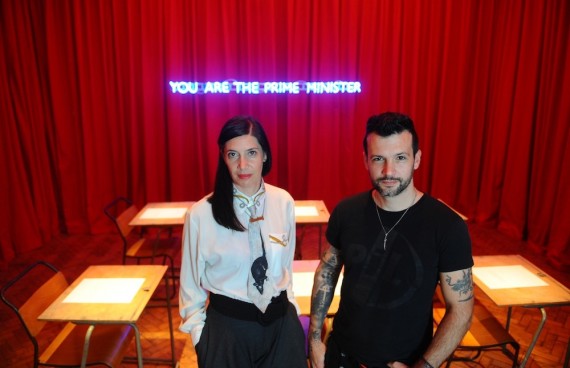 What kind of a year has 2014 been for you?
Karen Mirza: Insanely busy.
Brad Butler: It’s been a year of being squeezed, so many of our friends are now having to leave London, who can afford to stay? We really miss them.

What has changed for the better and what, if anything, has changed for the worse?
KM: Having a home in Istanbul is for the better, the insane gentrification of our local neighbourhood in East London is for the worse.
BB: So many recent campaigns have been run using the word ‘change’. The word change itself has changed. We could do worse than return to its first financial use in the 1620s: “that change is a balance returned when something is paid for”. Like the balance to be returned to the public from their bail out of the banking system.

What do you wish hadn’t happened this year?
KM: Yet again, the destruction of Gaza.
BB: So many widespread counter-revolutions.

What do you wish had happened this year, but didn’t?
KM: I wanted to learn to free dive.
BB: That the Scottish public had voted for independence. It was a glimpse at an amazing potential: a huge mobilised public with a capacity for combining their imagination and empowerment with political transformation. Even at a minimum the Scots would have established their rights to be oppressed by their own politicians.

What would you characterise as your major achievement this year and why?
KM: Dreaming in a new language (Turkish) and weitermachen! (to continue to make).
BB: We kept our not-for-profit organisation ‘no.w.here’ alive for a tenth year, despite not owning our building and facing cuts.

Is there anything you’d like to have done this year but haven’t?
KM: Boxing (my local trainer under the arches in Bethnal Green was displaced by corporate noodle bars sticking the rents through the roof) and more time for drawing, as I have a new bespoke drawing table as a birthday present.
BB: After 10 years it would be nice to install some heating.

What would make 2015 a better year than 2014?
KM: Being paid! Twenty years working as ‘professional artists’ and so many institutions still ask us to perform free labour.
BB: Having our dearest leading lights return to the Earth plain: Ian White, Harun Farocki, Al Rees, Maya Angelou…