2021 – How was it for you? #3: Alice Wilson, sculptor exploring participatory processes - a-n The Artists Information Company 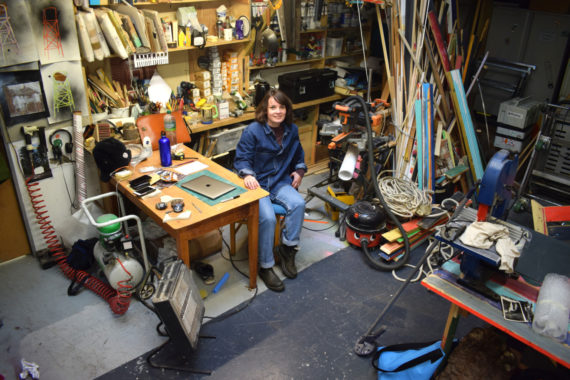 Alice Wilson is a London based artist exploring notions of home and shelter as a way of understanding relationships to space and place. Her practice has developed through engagement with participatory processes as well as negotiations of site. Her current exhibition at domobaal explores an organic process of architectural construction that is contingent on her prolonged occupation of the gallery space. a-n Writer Development member Jessica Ramm catches up with Alice to hear about her exhibition and how the past year has informed her work.

What kind of a year has 2021 been for you?
There are quite a lot of positives that have come out of what is a difficult time. I’ve had the focus of working towards a solo exhibition with domobaal for the whole of the lockdown. It’s been postponed and postponed, but it’s always been the first show that was going to come out of lockdown. I’ve had more time to make, and having the opportunity to make towards that was absolutely fantastic because so many contemporaries have had things cancelled. I’ve felt really fortunate.

What has changed for the better?
The quality of conversations that have developed over the last year has been a real focus and the shift in the way I work and the way I work with others. There’s been increased interest in my work – which has been fantastic – but I started to invite people into my studio to talk about the work and went to their studios as well. The quality of conversation around being with someone’s work in their space for two hours has moved on my own thinking and my own practice so much compared to the social situation of going to see work at private views and relationships being an element of networking. That focus being on the work and the making has really shifted.

I’ve also developed a writing practice about that. I began to write a fictional conversation which brought in ideas and discussions I’d had with various different people but it became a way of me understanding, rationalising and processing it. I used myself and a character from fiction: James Hogg’s ‘The Private Memoirs and Confessions of a Justified Sinner’ which has Gil-Martin as the psychosis or devil character essentially, which all sounds quite dark. I wanted to use this element to show how malleable the ideas are, and also that nagging voice in the back of your head when you’re making as to why you are making. I developed that character as someone to frame my ideas and its come into a piece of writing called ‘A Dual Presence’ . It’s something I’m working on continually now alongside my practice.

What do you wish had happened this year that hadn’t happened?
I had real optimism that the current political situation and the pandemic would result in some positive societal changes and maybe things becoming more affordable, but what has happened is that it feels like there has been more social divide build up over that time.

Also that aspect of not being able to move freely, and the anxiety of self-employment means that days off haven’t happened for so long. I wish some kind of holiday had happened where I could have had a week not thinking about work, my practice, in a different place.

What would you characterise as your major achievement this year and why?
That would be the exhibition ‘A Mild Epiphany On My Bike’ with domobaal. The personal achievement within that as well as the public achievement is that I genuinely feel that the work arrived in the right place and I feel excited and happy about where it is. I set myself the challenge of making the final piece in the gallery as opposed to in the studio, and right up until the end of the install I couldn’t work out how all the work would be hung and how the final piece would work. So I feel genuinely pleased with the outcome and see it as my biggest achievement.

How will this experience have an impact on your own work?
I think the whole process of making for this show – both through the realising of ways to make and through the written element that’s come into my practice – I think it’s just opened up more opportunities and interest in my work. In a couple of weeks I’m going on a residency which has been postponed for two and a half years pretty much. It’s been postponed three times. I suppose trying to use that time and space in a really productive way.

Actually, as I said that I was thinking ‘…I just want to try and read a book and find some of that space I’ve been craving’. So maybe I don’t want it to be incredibly productive from a making point of view.

Is there anything you’d like to have done but haven’t?
I feel like the answer is have time off. Maybe it is as simple as that.

What are you looking forward to in 2022?
I’m looking forward to the residency at Hogchester Arts and I’m also just starting a collaboration with Slovenian artist Neja Tomšič with the IMA intermission museum of art . And I have another show in quite a different space that I’m excited to make work for 303 Projects in Lowestoft in February. So I don’t think I will have any time off. I think the residency will serve to that.