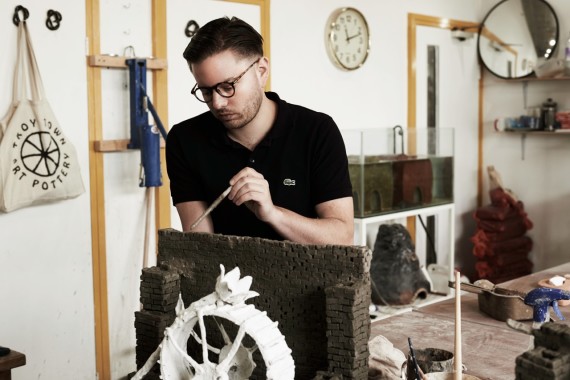 In 2013, artist and Slade School of Art graduate Aaron Angell applied to Open School East to be one of its first cohort. His project proposal was to set up an alternative, contemporary art-focused pottery for use by resident artists and the wider community.

Perhaps recognising the scale and ambition of the project, the directors at Open School East invited Angell to set up the pottery as a longer-term project, within their space in the Rose Lipman Building on De Beauvoir Road, Dalston, functioning as a separate entity alongside their activities.

Over the last two and a half years, approximately 65 artists have passed through the Troy Town Art Pottery‘s doors for a series of two-week residencies. Now, with a move to a new space just a couple of streets away from its original home, and a major £40,000 award from Bank of America Merrill Lynch through Create London‘s Create Cities commissioning programme, Angell is putting the artist residency programme on hold until the end of the year, while he develops Troy Town’s youth programme and expands its equipment base.

The pottery’s new space on Hoxton Street – which it moves into in May – is a small outbuilding set within the Hoxton Trust Community Garden. While based on an allotment-model, the garden is full of ornamental flowers rather than vegetables – a meaningful coincidence for Troy Town Art Pottery, where the emphasis is on the sculptural qualities of ceramics rather than the traditional vessel. 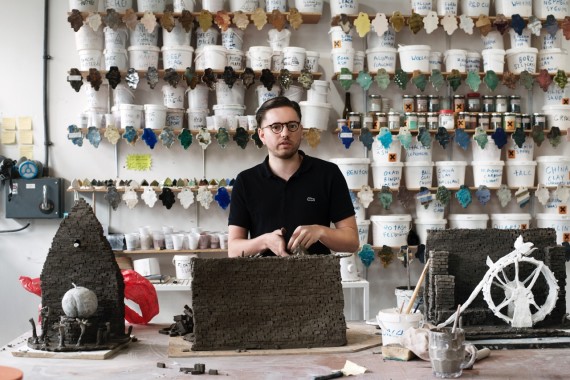 How did the Troy Town Art Pottery come about?
I had always been using other people’s spaces or other ceramic studios on a temporary basis, or having to work in craft potteries, and I wasn’t enjoying it very much. I wanted my own ceramics studio to learn about glaze chemistry – getting much more involved materially in a way that I couldn’t do renting time at other studios. Also, I wanted a space where artists could work with ceramics outside of the auspices of a pottery. The craft stranglehold on the material comes from the fact that ceramic studios are expensive to run, they’re expensive to get together.

You are moving home now after over two years at Open School East. What will change?
It’s going to increase – not the amount of people I can work with, but the complexities of the processes. Suddenly we’re going to be able to do raku [firing]. We’re going to be able to do fuel process basically, including a gas reduction kiln, which is something like a baptism of fire for me and the technicians, because we’ve fired in a gas kiln before, but we haven’t done it ourselves.

I’m now working with this developing group of young adults who are also going to be deeply involved with the new pottery. They will guide the way this works. I want them to get to the position where they can run their own workshops for other people and it could be a self-replicating process. First and foremost, I want them to be involved with ceramics, and be interested in working with ceramics.

At Troy Town, you discourage the making of functional wares, in particular the vessel…
Generally, the people who I’m interested in are not interested in vessels. That’s just how it’s been. The job is already done there before anybody can say ‘no potters’, which is not true either. No-one’s applied, who I’ve been interested in, who has then turned around and said, ‘Yes, but my project is pots’. It doesn’t happen.

What I want to do is outside of that. It’s to look at ceramics as almost not ceramics… to see it sculpturally and to see the limitations of the material as a benefit. And to say, what happens when you stop treating this as a special material at the point of delivering an art object to an audience – where people don’t walk in for the first time and say, ‘Oh, it’s ceramics’… [but instead] say ‘It’s sculpture’. 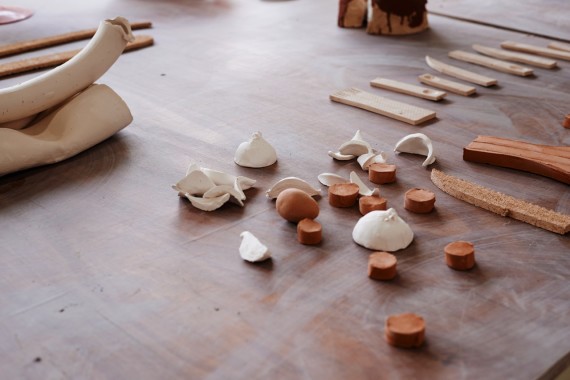 Would you say that Troy Town Art Potteries is about self-teaching and peer-learning?
There’s been a lot of collaboration that often happens by accident in the pottery, and often between my technicians and other artists as well. Most recently the residents in there were Andrew Munks and Hannah Regel and I was actually away for the making week; it was being run by my assistants and when I came back, lots of the pieces had multiple authors. It’s a working environment. People help each other by mixing glazes for each other, or if one person knows more about how to make a certain kind of join or a certain way of building up clay, they’ll show the other one. It might be something they’ve only just found out the day before. It’s a very co-operative environment.

How does the Troy Town Art Pottery complement your own practice as an artist?
It’s let me develop my ceramics enormously over the past two and a half years. To become completely self-sufficient as well is incredibly important and to learn so much more about the material, just from the point of view of being able to have time in there to do this. 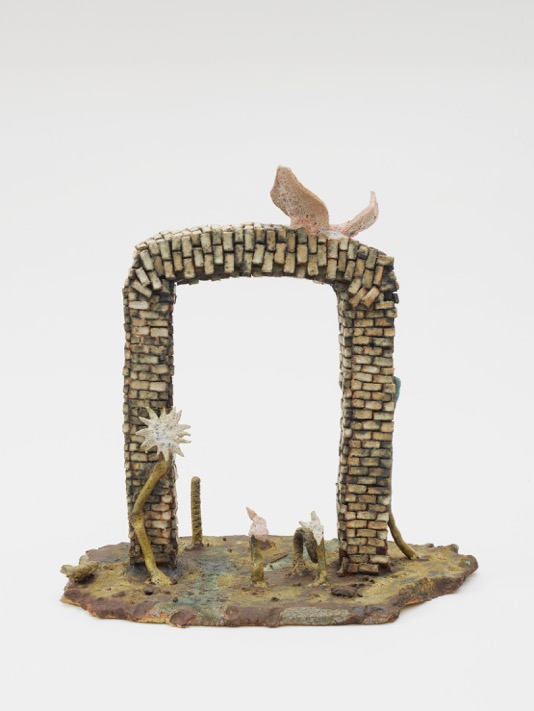 Have there been particular artist projects that have excited or surprised you in terms of stretching the use of the material?
Anthea Hamilton‘s work was really nice, she didn’t even list it as ceramics in this exhibition in New York. It was just stuff that was there; almost a designer’s approach to the material. Tom Salt did some really interesting stuff with foaming glazes; he had quite a lot of ceramics experience before. I think at the moment with just an electric kiln and this set of glazes that I’ve developed, people can be very experimental but there is still a material set, so to speak.

You started using ceramics two or three years before you started the art pottery. How did you come to ceramics?
I’d seen pieces by other people like Ron Nagle or Ken Price. Californians mostly, back then. And I was interested in it. I found it quite seductive. I was at the Slade and we didn’t have any facilities for ceramics – that made me want to do it more. I always knew I wanted to make sculpture with it and I thought I could work out already how they would look. It’s been a bit of a rabbit hole for me.

Aaron Angell is exhibiting as part of Glasgow International until 25 April 2016. glasgowinternational.org