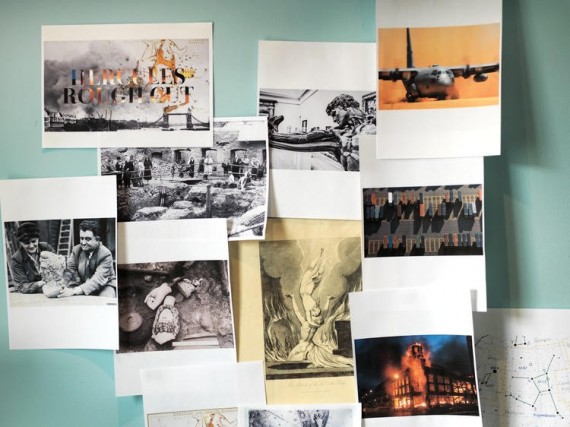 Not many artists can splice together 1950s Beat poetry, contemporary street talk and the writings of William Blake and come out the other side with something resembling a coherent work of art. Yet that is just what London-based artist David Blandy has done for his new commission as part of Bloomberg SPACE’s The Homecoming programme, a series of exhibitions that explore and respond to the history and architecture of the City of London.

Well known for his riffs on pop culture – from Star Wars, to old Kung Fu movies via the blues of Robert Johnson – Blandy has forged a career by taking the familiar and mutating it into something new and way more profound. Drawing on Bloomberg’s vast media archive of global financial news footage, his new work Hercules Rough Cut offers up an alternative history of the City informed by mythology, war, disease, injustice, technology and development.

How did you get involved with The Homecoming, Bloomberg SPACE’s 2015 programme?

I was approached a couple of years ago by Sigrid Kirk from Arts Co to propose a work for Bloomberg SPACE that addressed the history of the City of London. It started as a series of vignettes, images of a group of characters conversing in different languages through the centuries, witnessing the changes. But as the writing developed, moving imagery started to make the most sense. A way to point to the circularity of things. And the writing got more abstract, more about how words recur and evolve, have multiple meanings.

Are you familiar with the other artists involved in The Homecoming programme – Adam Dant, Gayle Chong Kwan and Melanie Manchot? Is there a general theme that links the work?

I knew their work before, but it was good to meet them. Gayle had shown at Peckham Space just before me, and Melanie won the Great North Run Moving Image commission. I didn’t know Adam’s work, but I really liked how he approached the project. We were all asked to respond to the history of the Square Mile, which is a pretty expansive subject, as what has happened here has influenced the world. From a provincial outpost of the Roman Empire to the centre of the British Empire to global finance, London keeps evolving.

What did working with Bloomberg bring to the table? In particular, how did you make use of Bloomberg’s archive of global financial news footage?

Bloomberg has given me enormous support with the installation, enabling me to realise an idea, featuring four spinning HD screens, that would have been impossible otherwise. The Bloomberg media archive is a great resource, but very much an archive of means of production, business news rather than current affairs. So through the archive you get a portrait of the processes that underlie the worldwide machine of capital; mines and foundries, factories and distribution centres, trade shows and city views. I wanted to see what would happen when you place those images against each other, alongside a spoken text that revolves around the human ramifications of these procedures.

The work explores civilisation and in particular London. Do you feel like the capital retains its relevance to artists? In addition do you think that the rising costs of living and renting a studio here are becoming an increasing issue for artists?

I think London will always be important for artists, it has so many institutions and collections. The Rothko room at the Tate was one reason I wanted to be an artist in the first place. But as a place to be a practicing artist it is becoming increasingly unsustainable. Rents and studio costs are pushing people further and further out, and there comes a point where you think, maybe theres another city I could live in where I could work and feel more in the middle of things. I grew up in London, and I’ve watched it change. Everything that I loved about it is being erased, cleansed, but London’s function as a global magnet will keep it rough around the edges.

You recently contributed a work to the Drawing Biennial 2015. How important is drawing to your multidisciplinary practice?

I love drawing. I’ve tried to keep a comic-a-day diary in the past, something I should get back to really. It’s such an immediate way of trying out an idea. But I see this show as a drawing really, a ‘rough cut’, a sketch for something. Something that can never be finished. But yes drawing and writing are the starting point for everything I do.

I’m working on a graphic novel called A Brief History of Knowledge with illustrator Daniel Locke and science writer Adam Rutherford. It’s an absurd title, but we’re trying to humanise a history of how knowledge is disseminated, from cell reproduction to storytelling to record sampling and the internet. And the Biters, my hip-hop crew with artist Larry Achiampong, are going to be keeping it raw, hardcore. We’re working on a film about Frantz Fanon and the post-colonial condition, made entirely within Grand Theft Auto Five.