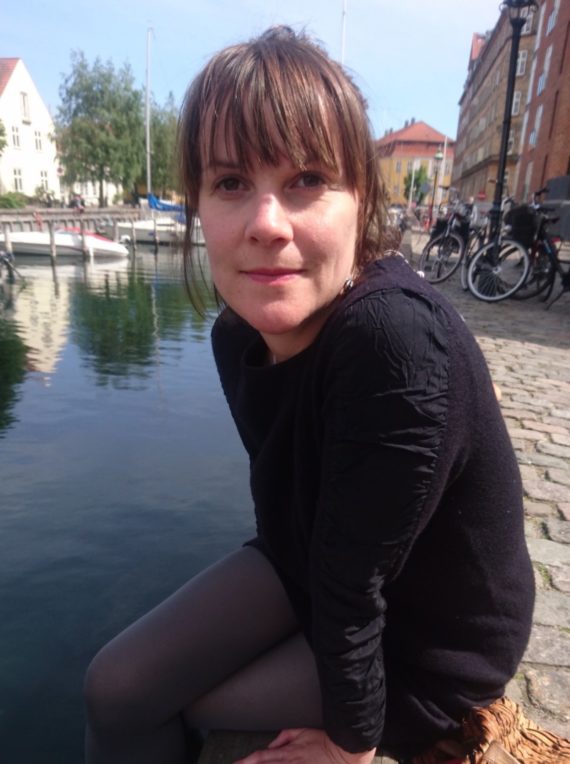 Laura Purseglove is only a couple of months into her role as project curator at Art and Christianity Enquiry Trust (ACE Trust) and she has already met with artist-led projects, refugee charities and a number of historic and church groups.

Over the next two years she will be developing a thought-provoking programme of exhibitions and commissions for churches and cathedrals throughout the UK.

Purseglove is no stranger to curating works in historic and unconventional environments. She began her career at the British Museum where she spent five years coordinating the Asahi Shimbun temporary displays.

Following that, she joined Artangel, where she continues to coordinate productions such as Dinh Q. Lê’s The Colony in a disused warehouse in Peckham, and Inside: Artists and Writers in Reading Prison, for which she also worked with Steve McQueen on the development of his piece, The Weight (2016).

The new role at ACE Trust has been funded for a part-time two-year period, through a grant from the Jerusalem and Headley Trusts and is shared with the Cathedrals and Church Buildings division of the Church of England.

Purseglove is already developing curatorial concerns that explore historical ideas around materiality and contemporary issues such as the refugee crisis.

Alongside a curated programme of commissions and exhibitions, a core part of her role – almost like an arts development officer – is to support artists and church groups to get their own independent projects off the ground. Indeed, one of the first projects that Purseglove is working on is a series of case studies and a booklet on commissioning temporary works for religious spaces. 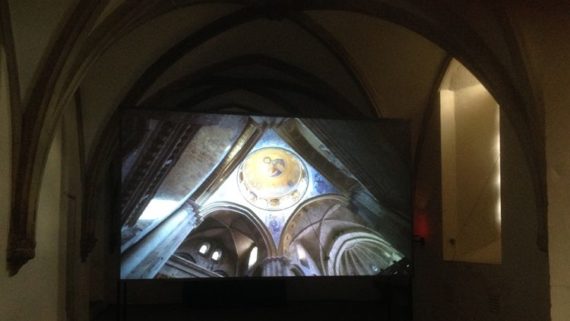 ACE Trust has an ecumenical position and its staff act as best practice advisors for projects that bring art into churches and cathedrals of any denomination. Purseglove’s role builds on the organisation’s history of programming touring exhibitions and artist commissions for churches, many of which were curated by Paul Bayley, now the director of Florence Trust Studios.

This is a brand new role for you, what drew you to it?
I was working at Artangel and I have always been very interested in architecture and site-specific art projects and exploring historic buildings. I love churches – I find them fascinating places – so when I saw the job I was intrigued. I thought it seemed like a really exciting prospect to work in these buildings that are so ancient, but [that are] also very much alive and active. It’s very interesting to me how it will work producing art projects in buildings which are strong public places – they are these live religious spaces. I think this is very exciting for an artist and anyone interested in the nature of place. There’s a living tradition that is being upheld in a church. 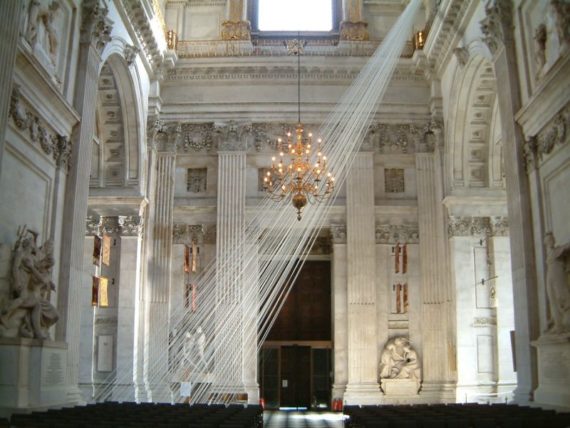 How has the response from churches been to your role so far?
It seems to be generating a lot of interest within church and historic buildings’ groups. There’s more interest in temporary projects than there used to be. There used to be a big focus on commissioning permanent things, so it’s an interesting shift. Liverpool Biennial, Art Night, Sculpture in the City – all of these festivals which use churches. Churches see what can be done and they want to, perhaps, be involved.

What are the challenges and important factors to take into account when curating projects in churches?
Artangel is quite good preparation, because we are always working in spaces which we are not the guardians of. It is very important to work collaboratively and for everyone to be able to contribute and have their say – as well as having strong leadership about the vision for a project. It is important to involve as many people as you can early on, to think hard about what your aims are, why you are working in a church building and what you want the outcome to be; it’s not the same as working in a church that is no longer being used as a church, so [an important question is] are you willing to engage with the issues that are inherent with that. To have an open dialogue with people. Successful projects are very collaborative. 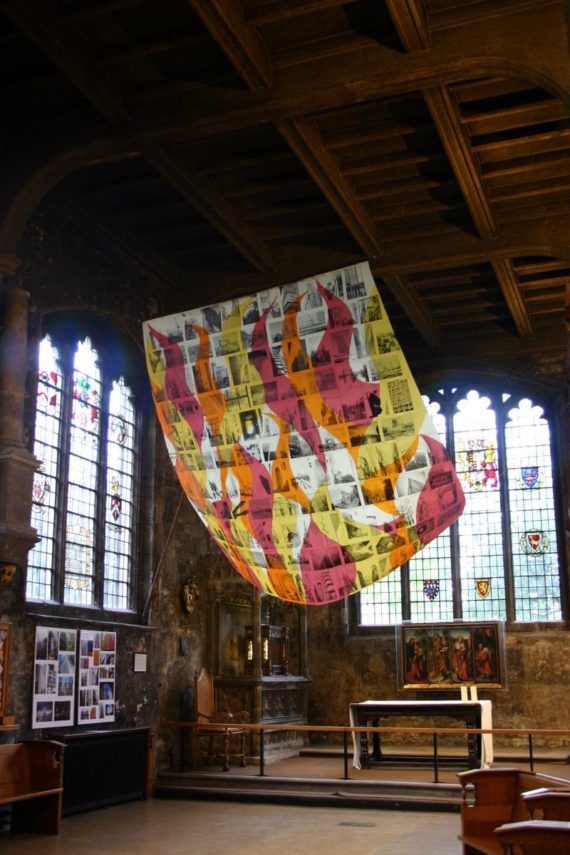 Are there any projects that you’ve experienced in the past that you see as good examples of art in churches?
As part of the Going Public: International Art Collectors in Sheffield programme a few years ago, the Sandretto Re Rebaudengo Collection was shown at Sheffield Cathedral. The Dean of the cathedral was selecting the works and he deliberately went with works that might be seen as being provocative, Jake and Dinos Chapman for instance, using religious imagery in a way that is quite confrontational. A lot of people might have shied away from something like that and I was interested in his willingness to incorporate that implied critique and take it on and say, “Well, this is part of the discussion, let’s be open and talk about it and think about it.” That’s quite inspired thinking.

There was a wonderful project at [Fabrica, Brighton in their disused church space] by Elpida Hadzi-Vasileva. She uses animal intestine and displays it in such a way that it has this amazing ethereal, very beautiful appearance. It’s very easy to get an Instagram-friendly project in a church, because churches are theatrical and stunning spaces. There’s a danger of things that look very theatrical but are actually a little bit shallow and, for me, [Hadzi-Vasileva’s] use of that material – of base matter – that is transformed into something quite transcendental, works on lots of levels. 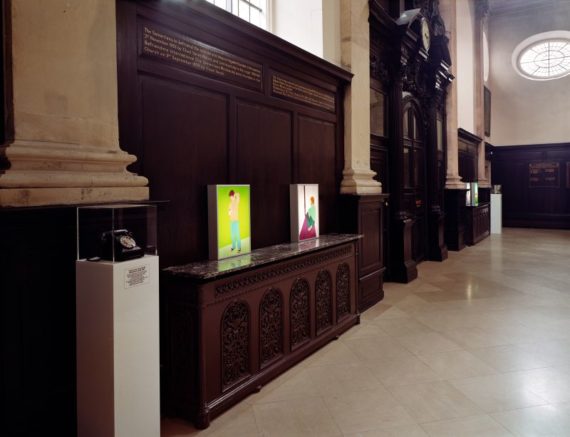 So, it’s important for projects to engage with the context of these environments?
The most interesting projects, for me, engage in some way with theological tradition, or the nature of belief. They don’t have to be about celebrating it. To have a project that has some depth, the artist needs to engage fully with the dimensions of the space – they are physical, but they are also the tradition and the practice of the church. There are practical limitations of working within a building which is being used; which has a congregation in on Sundays. You can create spectacular effects when a church is empty, but there are challenges in working in spaces being used for different things.

Will you be incorporating social engagement within your programme?
Residencies are a really good model by which churches can bring in artists to respond to a space. Churches do often have a bit of space and artists are often lacking in space. It could be a good reciprocal project to get a good residency programme up and running. A residency programme has real capacity for [engagement with a wide community]; I think that is very important to churches. Certainly, that’s a big part of their work.

For more information on the Art and Christian Enquiry Trust visit acetrust.org