A Q&A with… The British Invasion, artists and curator - a-n The Artists Information Company 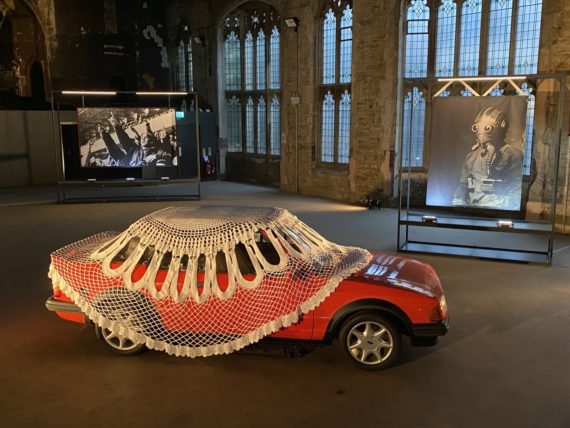 ‘The British Invasion’ is an exhibition of newly commissioned sculptural, sound and photographic works by Jamie Holman, Masimba Hwati and Jasleen Kaur. Launching as part of the British Textile Biennial 2021 which takes place across Pennine Lancashire throughout October, the exhibition takes its focus as the colonial and post-colonial contexts of the Lancashire textile industry and is sited within The Exchange in Blackburn, formerly the town’s Cotton Exchange and a keystone of this history. As the artists and curator Alex Zawadzki attest, however, these problematic legacies remain very much still present. Perspectives of colonised and coloniser have been unpacked through dialogue with each other in the project’s development. Interview by Anneka French.

Could you tell me more about the ideas behind the project?

Alex Zawadzki: Jamie and I have worked together for three years, including on the British Textile Biennial in 2019, on working class stories of the textile industry that are forgotten and uncommemorated. We felt a lot of stories had not been explored properly, particularly those rooted in colonialisation and the migration of people, culture and materials in both directions. Two years ago we felt dialogue should be expanded; I had been developing conversations with Jasleen and Masimba separately.

How have these dialogues developed into artworks?

AZ: Masimba lives in Austria but was in the US when we started, Jasleen is in London and Jamie and I are in Blackburn so we started with video calls. These were spaces to have vulnerable and challenging conversations about race and identities.

Jamie Holman: It was important that we gave attention to language and spent time getting to know each other.

Jasleen Kaur: Being invited into this commission and the incredible breadth of research immediately made me think about the site (which I haven’t visited due to Covid) and my own proximity to it. I’m sitting with ‘residue’ within my practice, often unearthing or excavating. The site, Empire, the cotton industry and migration stories are my connection to this work. Our personal, complex relationship to these topics is the foundation for what we have all produced.

Can you explain further the impact of your personal histories on the work?

JH: Something about our fathers emerged through conversation and the works come from lived and inherited experiences. Masimba’s father fought against the British in colonised Rhodesia, now Zimbabwe, and his nickname was Ringo Starr because he loved music and fashion. My father was a soldier shot in Northern Ireland; my Catholic family came to England from Ireland to work in the mills. Jasleen spoke about forced migration through partition and has talked about the ‘mess’ of culture. Works have followed these trajectories.

You’ve had a difficult set of contextual circumstances too.

JH: We haven’t been able to meet in person and have relied on Alex’s curatorial intervention and her producing expertise. The pieces on display are all monumental works developed from a distance.

AZ: The cotton trading floor had multiple layers of textiles and money changing hands, as well as the migration of skilled workers with promises of certain lifestyles. It’s a large, challenging space and semi-derelict. It informs the work. It’s crucial to note that we’re not trying to wrap anything up; the exhibition won’t create an ultimate conclusion. Our experiences are all so different though there are parallels in approach.

Let’s talk about the works.

JK: Sociomobile is a red Ford Escort, the closest we could get to my dad’s first car when he moved to Glasgow from Delhi. It’s covered in an approximately 4m round hand-crocheted doily made by Rachel Mills, bringing together the automobile industry with textiles, both major migration factors for South Asians to Britain. I often work in a cut and paste or hybrid way. I pull out complicated narratives and with this work I’ve been thinking about Stuart Hall’s essay Cultural Identity and Diaspora, about how it’s impossible to go back to a fully-formed, essentialised past and about Amrit Wilson’s book Finding a Voice: Asian Women in Britain that details in its introduction Britain’s labour shortages, which were the driving force for migration from ex-colonies to a post- war Britain.

JH: Culture manifests in working class communities. Colonial Amusements is the ‘catch all’ for the series of works I’m exhibiting in ‘The British Invasion’, and one of the works is a military Land Rover door; the internal surface has been made into a mirror ball. Its title is Everything stopped for Top of the Pops. It came about through speaking with young soldiers in Belfast who were going to nightclubs – if it was a good night on Top of the Pops, no one got shot. Really interesting musical cultures emerged although they are not easy to narrativise or locate. I use simple formal gestures to communicate complex ideas. The tailor Patrick Grant cut me a suit out of army blankets; other works look at football terrace culture.

AZ: Masimba’s experiences of colonialisation are quite different – he’s directly lived through it. He has been a Black man living where white men are oppressing his nation. He talks about the rich sonic spaces of marketplaces which are different to the quiet, inherited behaviours of other spaces where people are reserved, even after ‘liberation’.

For Sokunge: As if Masimba has been developing a performative sound sculpture using objects imbued with history, inviting Paul Nataraj, of Indian and Polish dissent, to do a sonic exchange. In Zitye: Second hand Kings Masimba will show six tintypes printed on cotton and in lightboxes set into an installation using second-hand clothes. The work is made in connection to his father, with Masimba exploring his ability to be free and express himself. As a result of our conversations, I am now representing Masimba through my gallery Second Act.

What has been your approach to community engagement?

JH: The context for the work that Alex and I do as part of Uncultured Creatives is East Lancashire – Blackburn with Darwen is positioned as having the lowest engagement with art and culture in the country. There’s a lot of programming and commissioning around heritage and nostalgia in the area which runs in parallel to this narrative of non-engagement. The cotton trade is responsible for the founding of the football league and other surprising manifestations of culture that are still resonating now. It’s not a heritage story but a live story. Alex and I previously produced a heritage archive called Flashback, which collected oral histories from people who were involved in Blackburn’s acid house scene in the early 1990s. For this Biennial, we’re producing a connected publication with Rough Trade Books.

JK: My sculpture will have sound and I’ve been working with DJ, Yung Singh. I’m really interested in sound culture, sound as protest and the Asian Underground born out of the Southall race riots of the 1970s and 1980s. Covid-19, budget and time have not really enabled other long-term engagement but there are always ongoing engagements in artists’ practice. There have always been highly creative cultures that are not part of ‘high’ culture and its economics. Just because these can’t be counted or turned into capital doesn’t mean they don’t exist.

The British Invasion runs 1-31 October 2021 at The Exchange in Blackburn as part of The British Textile Biennial 2021. For full programme details see britishtextilebiennial.co.uk/