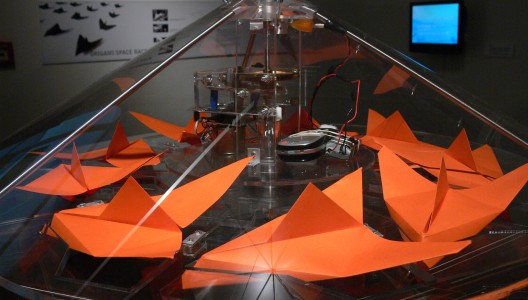 A motel for insects, an origami space programme and an invitation to fly specially-created kites – this year’s lineup for the Abandon Normal Devices (AND) festival brings a typically experimental selection of art, digital culture and cinema to the rural setting of Grizedale Forest in the Lake District.

Returning to where it launched in 2010, and having previously been hosted by Cornerhouse (Manchester), FACT (Liverpool) and folly (Lancaster), the event will take place from 18-20 September 2015.

AND brings together an eclectic mix of academics, artists, filmmakers and scientists and aims to push the boundaries of audience experience by abandoning traditional settings and partnerships.

As with previous editions, the ‘trek and trail’ aspect to the event adds an extra dimension, with visitors having to actively seek out work throughout the forest location.

Highlights from this year’s festival includes Saso Sedlacek’s Origami Space Race. Visitors will be able to make their very own airplane outdoors as part of an alternative space program exploring the development and promotion of ecologically-based space technologies.

Brandon Ballongee’s Love Motel for Insects will use ultra-violet lights on large sculpted canvases to attract nocturnal bugs during a month-long installation in the forest; Liam Young’s Where the City Can’t See is a site-specific installation featuring footage from a fictional film that exposes a vibrant and hidden underground community searching for the wilds in Grizedale Forest.

Elsewhere, Shinseungback Kimyonghun’s Cloud Face is a collection of cloud images that are recognised as human faces by a computer’s face-detection algorithm, while Jen Southern’s Searchers explores the work of rescue dogs through the act of flying specially created kites. In addition, a ‘living exhibition’ will be housed in the forest that responds to the site and its main inhabitants – plants.