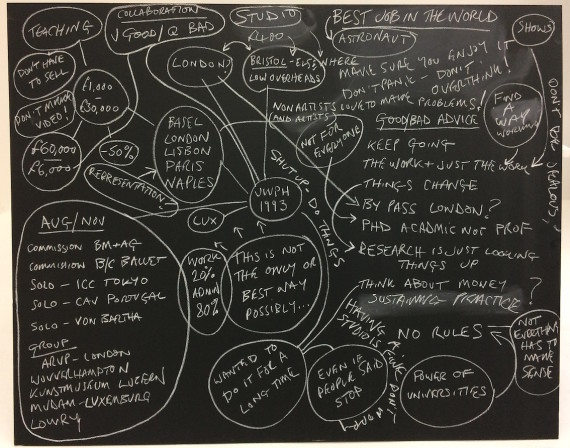 “I didn’t study for an MA but I now teach at the Royal College of Art, a postgraduate-only school. An institutional MA is a highly pressured, professionalised environment that’s not suitable for all artists. As so many can’t afford to do an MA, I think it’s becoming increasingly urgent to consider alternatives.”

The impetus for The Syllabus is a rethinking of educational strategies for artists. “The premise arose from difficulties, as I see them, in teaching art and in being taught by artists,” says Holden. “I’m interested in how artists pass on information and how artists learn from each other.”

Its educational approach lies somewhere in the overlap between postgraduate programmes and artist residencies – a model without the strictures of learning objectives and assessment criteria. Wysing director, Donna Lynas, explains: “We wanted to grow a bigger support network in collaboration with the project partners, with the potential to offer a genuine alternative to an MA.”

Since June 2015, ten artists selected from an open call have been taking part in The Syllabus. They have been on short retreats to Wysing in Cambridge, Spike Island in Bristol, New Contemporaries in London, and Eastside Projects, Birmingham. Workshops, discussions, readings, crits and social activities are spread across several days. 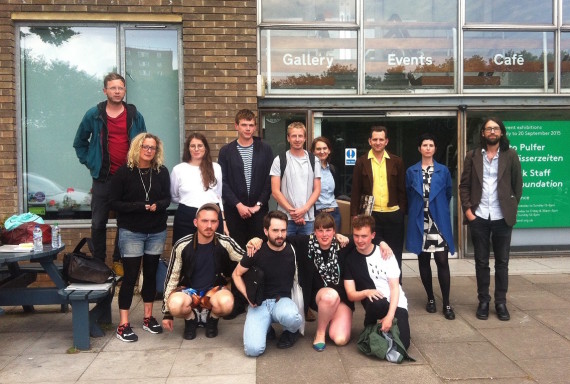 The artists are based in Cornwall, Manchester, Newcastle, Norwich, Leeds, rural Surrey and London, and their geographical spread is by design. The selection process also factored in educational background; a number of the participants have never studied on a formal MA programme or have been outside education for some time.

Simon Bayliss graduated from his MA five years ago. “I wanted to be part of a learning environment again,” he says, “but I also wanted to get out of Cornwall – to meet artists working elsewhere and visit venues I’ve never been to.”

Tom Varley, meanwhile, is simultaneously studying MFA in Fine Art at Goldsmiths, for which he relocated from Glasgow. “I was attracted to The Syllabus’ list of partnership organisations – they’ve worked with lots of artists I really like. I applied for both programmes at the same time; I felt I needed to do something different and was looking to be part of a structured framework.”

Ongoing evaluation of The Syllabus through survey, discussion and observation is allowing organisers to react directly to artist feedback – something postgraduate programmes are often criticised for not doing. This flexible approach is refreshing, says Bayliss. “I don’t feel as though we’re students. We’re all treated as individual professional artists and I don’t think this happens on an MA.”

Sessions have also included input by more established artists. “The first week led by Richard Wentworth was intense,” says Holden. “It became clear that some consistency was needed as the project moved between sites and was led by other artists. That’s why I’ve led crits at each venue. That way, there’s a constant pair of eyes to see the progression of individual artists. It’s important that tangible development is happening, rather than artists simply practising their presentation skills on a new set of faces.” 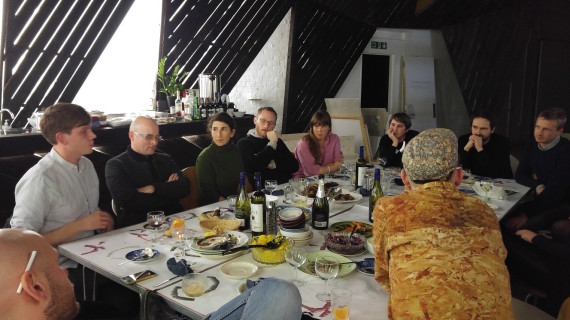 Formed around themed sessions exploring areas such as display, the archive and opting out, each is devised according to the exhibitions of partner venues. Holden explains: “Not all of the themes will immediately appeal but they are opening up hermetically-sealed practices, allowing artists to wrestle with new aspects of art-making.”

Varley adds that what makes The Syllabus different from a formal education programme “is that it forces you to engage with material that the trajectory of your own practice might not lead you to. Postgraduate programmes are so student-centred. There’s almost more taught content on The Syllabus than on an MA or MFA.”

Engaging with theory away from the university framework particularly appealed to Bayliss. “You don’t really get that chance when you’re working on your own in your studio. Being given research papers to study took me out of my normal working realm.”

The impact of the programme on the artists’ practice is difficult to measure, but Bayliss believes that it has helped him to think differently about his painting-based practice. “A few years ago I was much more of a painterly painter. Now I’m more conceptually driven. Perhaps this was on the cards anyway but The Syllabus has definitely accelerated this turn and been really supportive of it.”

Varley feels that particular areas of study will have a lasting impact on his work. “We read a lot of realist and materialist theory at Wysing Arts Centre, and many of these rebooted ideas have really undermined a lot of my thinking – in a really useful and positive way. 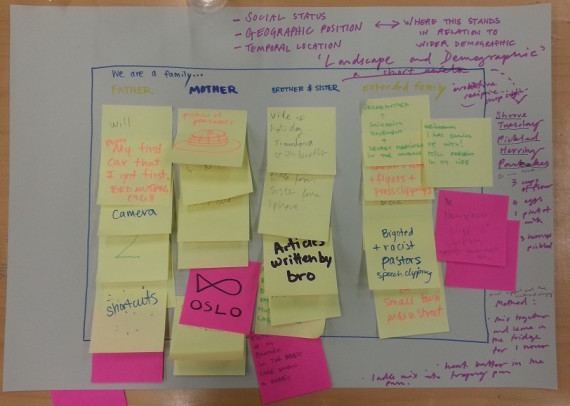 Artists are also being supported and challenged by a parallel programme of one-to-one mentoring – a recurring critical voice aligned to the artists’ interests and needs. The mentors have been selected in conversation with each participant and include curator Kathy Noble, and artists Eddie Peake, Marinella Senatore and Benedict Drew.

Bayliss’ mentor is multi-disciplinary artist Milly Thompson, whose input has proved valuable in the development of his current exhibition, Arcadia, at Hestercombe Gallery, Somerset. “She helped me to shape the presentation of my work in the gallery in a much better way than I had ever imagined.” Varley, too, notes that conversations with mentor Mike Sperlinger have been useful.

Artist-led offshoot projects are arising from The Syllabus, too. All ten artists exhibited in Ways of Looking, an exhibition at Hanover Project, Preston, at the end of last year. In May 2016 several of The Syllabus artists will be working at London’s Guest Projects for a week as part of the organisation’s own research into alternative art schools.

Holden concedes that the programme is working best for those artists based outside of London, helping them to build a wider network of connections in relation to, and away from, London’s art locus. It is also enabling partnership organisations to contribute to gaps in educational frameworks where they exist – ideas which can be taken forward within local networks. Eastside Projects’ associate director Ruth Claxton, for example, highlights a mutual learning process between both artist and organisation.

Having previously worked with Open School East and School of the Damned, Holden is heavily invested in researching art education models outside formal systems. “Of course, The Syllabus is different to an MA structure,” he notes. “There are no studios, there’s less time and it’s pretty exhausting. But certain aspects of the process remain.” He has been surprised, however, that some of the participating artists report that The Syllabus has given them confidence to apply for an MA. “It was never meant to be an elaborate foundation course.”

Despite Holden’s frustrations, the project does seem to be testing the value and viability of these more flexible structures, though it will be difficult to replace more formal programmes entirely. “It feels like an experiment,” he says.

“The next thing we have to tackle,” explains Lynas, “are ways of allowing such models to be valued as equally as formal education. Lobbying is needed for alternative programmes to be taken seriously. So many opportunities are aimed at graduates, excluding those who’ve chosen a different route. This is not representative of artists working in the UK today.”

There will be an open call in March for submissions for The Syllabus 2016/2017. www.wysingartscentre.org

Artists selected for the Syllabus programme