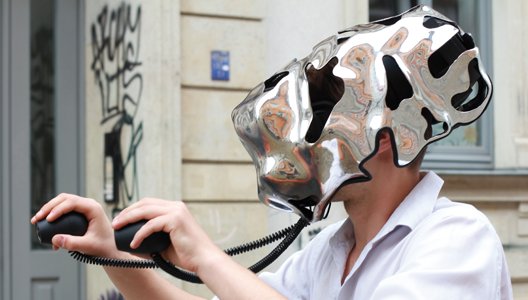 Inspired by the World’s Fairs of the past – showcase events where the public witnessed for the first time such life-changing inventions as moving images and electric light – this year’s Abandon Normal Devices festival in Liverpool is to host its own AND Fair.

Building on the festival’s digital culture, new cinema and contemporary art remit, exhibitors at the fair will be providing an insight into projects that, in the organisers’ words, toy with ‘optical illusions, flying machines, biological probes and computer algorithms’.

EYESECT, for example, is a wearable interactive installation that replaces the wearer’s eyes with handheld cameras. The headset’s creators, The Constitute, will be on hand at the fair to demonstrate the device and share their love of bionic experiments, sci-fi and cybernetic utopias.

Other exhibits at the all-day event on Saturday 5 October include Olga Massanet’s The Ghost in the Kitchen, which invites participants to tune into the ‘slow waves of ionisation that solar radiation causes in our atmosphere’; artist Steven Ounanian’s The Locus of Anxiety, an exploration of the cultural, psychological and technological catalysts for anxiety in society; and edible tracking cookies created by Ben Dalton – with some help on the day from fair visitors and their smart phones/laptops.

Now on its fifth edition, the AND festival – which alternates between Manchester and Liverpool – is this year hosted by FACT (Foundation for Art and Creative Technology). Major commissions for the festival include the SEFT-1 road and rail vehicle created by Mexican artists Los Ferronautas, which is designed to travel along abandoned railway lines; a short film by artist Aleksandra Domanovic on the history of the internet in the former Yugoslavia; and the world premiere of filmmaker Mark Boulous’ new video installation, Echo, commissioned and produced by Forma in partnership with FACT.

Other artists featured in the festival include Imogen Stidworthy, Jesse Darling, Marshmallow Laser Feast and Nicolas Maigret. In another innovation for this year, the festival is also hosting a series of ateliers focusing on current artistic and cinematic practice.

Slaves to a vision: Rob Allen on Jeremy Bailey and Abandon Normal Devices 2012 in Manchester