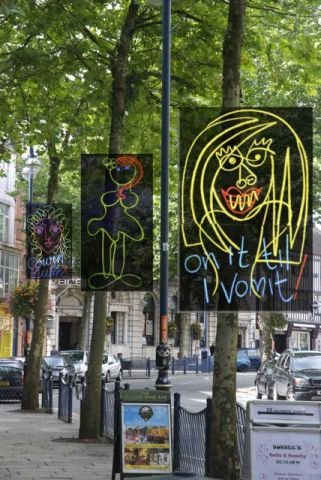 “For Art Across The City 2012, we wanted to make a big visual impact in the city centre, not hidden away where no one goes, but where people shop, eat, congregate, socialise. The works are big, bold and have an instant attraction that will start people talking.”

It’s been a busy couple of weeks for Project manager Gordon Dalton and the rest of the Art Across the City team, with the installation of five new commissions taking place in Swansea city centre. “With a few days to go until the launch event at the National Maritime Museum, the most common question I’m asked is ‘how is it all going?’ I’m tempted to say ‘terrible, it’s all going wrong’, just to feed a little gossip mongering, but in reality, it’s all going very well.”

The project is organised by LOCWS International, an artist-led charity based in the city that commissions artists from the UK and beyond to create new contemporary public art works. The range of commissions is broad, including both temporary and permanent works.

For Art Across the City 2012 there’s a video game by David Blandy, neon works by David Marchant, a series of striped shelters by Joanne Tatham and Tom O’Sullivan, Fiona Curran’s multi-coloured constructions built into a pair of trees, and a work by Jock Mooney that takes a Bonnie Tyler album cover as its starting point. These new commissions are complemented by seven previous commissions, five of which are now permanently sited in the city.

Dalton reflects on how LOCWS International approaches the commissioning process: “When presenting work in the public realm, the possibility for failure is always heightened, but that’s a positive rather than something to fear. When done well, public art creates curiousity, and curiousity creates questions. It causes you to look, and then look again, to question what, why, when. It’s the start of what hopefully can be an ongoing conversation.”

Artist David Marchant agrees that creating a conversation is important. His response has been to create a work that is “by the public, for the public”.

“Working with LOCWS International has enabled me to work directly within the public realm and to produce a site specific art work which is of its time,” he says. “I was interested in working with the public within a space in Swansea, to create a social commentary and a visual conversation. I opted to do this on Wind Street late on a Saturday night… to interact with people who were in their most expressive and unconditioned state.”

Having installed an 8’ x 4’ chalkboard in the street, Marchant invited revellers to create self portraits and add their comments: “The response was overwhelming and people were only too keen to interact.”

The finished work turns these chalkboard drawings into a series of neon sculptures displayed in a line of trees back on Wind Street: “I wanted the initial appearance of the neon to create a literal, fun element within the work accessible to the masses. [The medium] fitted into this bright vibrant heart of the party goer’s paradise.”

Looking to the future, LOCWS International hopes to develop the programme into an international contemporary art biennial for Wales. Dalton explains: “We currently commission roughly 8-10 artists per year which are split over two events in spring and autumn. In 2014 we will merge these events and commission 10-15 artists and bring back a few favourites from the past.

Follow the Artists talking blog for updates on all five new commissions.