The art of incarceration: representation and rehabilitation in UK prisons - a-n The Artists Information Company 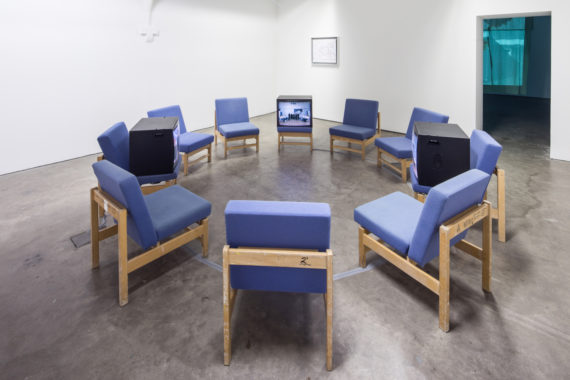 My journey to Birmingham is almost thwarted by the discovery of an undetonated second world war bomb in east London that shuts down nearby City Airport and local transport. I ponder this, recovering from my rush to Marylebone station, as my train chugs north. The past, when unresolved, can wreak havoc on the present. As I am to spend the day contemplating, both city infrastructure and human beings carry within them historical wounds and traumas.

In December I visited Edmund Clark’s exhibition ‘In Place of Hate’, along with my fellow writers on a-n’s Writer Development Programme and wrote a review of his show. I’m returning to Ikon for a day-long symposium that seeks to address some of the themes and issues raised by this interdisciplinary presentation of work, made during a three-year residency in what is described as Europe’s only fully therapeutic prison, HMP Grendon.

Over the course of the day we consider the role of media and art in the formation of public perceptions, and the opportunities for using artistic processes to challenge prevailing assumptions and beliefs. We also reflect on the use of art as a therapeutic and rehabilitative tool within the prison environment itself.

We begin by thinking about the role of photography in the representation of prisoners and learn that what we call a ‘mugshot’ came into being in the early days of photography in the 1840s, becoming a standard procedure by the late 19th century. This picture of an offender, a rare example of portraiture outside an artistic context, was useful for police records but also became the face of criminality as seen by the public.

In her talk, Professor Elizabeth Yardley, director of the Centre for Applied Criminology at Birmingham City University, defines media as literally “something that is in the middle…between things or phenomena”. We refer to ‘the media’ as an intangible faceless thing, but ‘media’ are people. Media exists in between ‘us’ and ‘prisoners’, shaping our perceptions of the criminal justice system and those within it. We produce as well as consume media whenever we post or comment on social platforms. 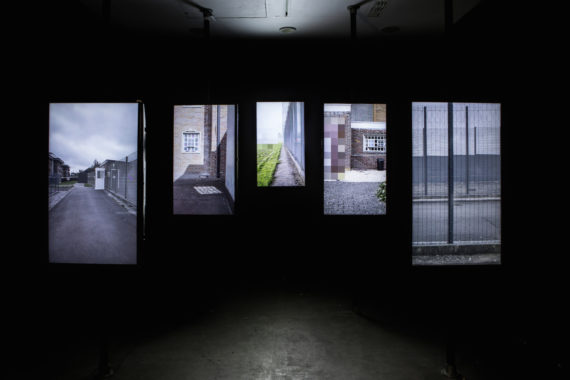 It is very easy to demonise prisoners as they can’t respond to how they are portrayed. Dualistic narratives of violent crime that portray a perpetrator and a victim often lack the nuance that would enable a deeper understanding of why crime happens and what can be done to try and prevent it. Various movements in criminology have attempted to prove an inherent criminality by attributing specific criminal facial features or suggesting the existence of genetic traits that produce an innate tendency towards offending.

Fortunately, we have moved beyond this reductive notion of intrinsic criminality. And while it is important for human beings to be accountable for their actions, we also need to take collective responsibility for our criminals, viewing the existence of prisons as a symptom of a wider social crisis.

According to statistics presented by the Prison Reform Trust (pdf), England and Wales has the highest imprisonment rate in Western Europe, and over a quarter of the prison population are from a minority ethnic group, compared with 14% of the general population. I’m inclined to think this is evidence of the systemic inequality, prejudice and reduced opportunities experienced by people of colour and those from underprivileged backgrounds, an issue we urgently need to address.

Grendon is unique in that it offers a therapeutic environment with a focus on rehabilitation, or ‘the action of restoring something that has been damaged to its former condition’. However, many of the men at Grendon have lived lives marred by neglect, abuse and trauma, and rather than working to return to their past lives, they’re aiming to start afresh.

Of the 85,000 people currently incarcerated in the UK, 80,000 are men. With suicide occurring on average once every three days in our prisons, the chance for men to address their underlying issues is crucial. Essential to this process are artistic therapies including psychodrama, an intensive group therapy that is featured in Clark’s piece Oresteia.

Psychodrama was developed by the psychiatrist Jacob L. Moreno, initially in mental hospitals. As a method of treatment, psychodrama creates linkages between present, past offences and childhood. Men develop victim insight and self-awareness. Historical traumas are identified and resolved, bombs are excavated and defused. Grendon’s head of psychodrama Jinnie Jefferies asks us to consider this question: “Are prisons simply places of confinement or places where people can heal and grow?” 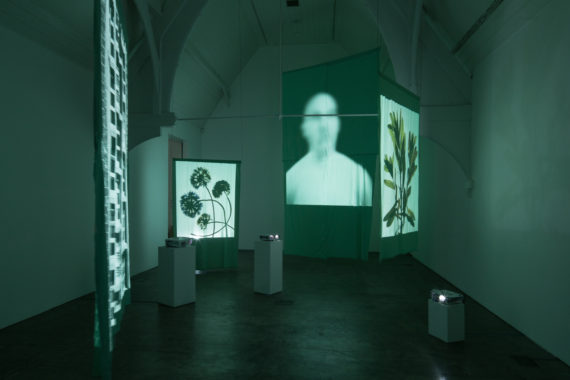 For many people the idea of a nurturing rather than punitive environment in which offenders are encouraged to ‘heal and grow’ is difficult. It takes a certain selflessness and generosity on the part of a victim to wish someone who has harmed them well. However, as a society we need to ask this question about the role of prisons and why it is that the prison population has risen by 82% in the last 32 years.

We’ve had six secretaries of state for justice in the past eight years and prisons are in desperate need of visionary leadership with a long-term and humane strategy. With the majority of sentences ending in the release of offenders back into the public, surely we should focus on reducing recidivism? Currently almost half of prisoners are reconvicted within a year of release. An emphasis on rehabilitation rather than retribution also takes into account the fact that many criminals are themselves victims of adverse experiences.

A fascinating presentation by Matthew McLean of Frieze gives an overview of prisons as represented in art. He discusses the 2016 exhibition ‘Inside: Artists and Writers in Reading Prison’ and is critical of what he describes as this “purely aesthetic” experience. I was greatly moved by the show but I am rethinking my assessment of it in light of his talk.

McLean summons art to not only provide novelty or shock value, but to transmit experience and challenge prevailing beliefs. Catharsis, he says, sometimes makes the audience feel they have engaged though they haven’t really. They feel and then they leave. Nothing has changed. Responding to a question regarding the responsibility of makers, he points out that the viewer also has a responsibility to engage critically and conscientiously with artworks.

Clark’s exhibition concerns incarceration with regards to the prisoners’ experience, but it also about control over the artist, in the form of Ministry of Justice requirements and censorship. These restrictions are implicit in the works displayed, which demonstrate a powerful form and content praxis. Clark refers to these as “ultimately productive” challenges, as they helped him with the development of a visual strategy – he saw an opportunity to make these forms of intervention and control visible in his work.

Clark deployed a pinhole camera process in order to facilitate the making of the participatory portraits on view in the installation My Shadow’s Reflection: “I wanted these to be images people made of themselves.” These spectral works simultaneously ensure prisoner anonymity whilst solving potentially troubling issues of voyeurism and representation.

The presence of an ex-Grendon resident, who speaks at various points throughout the day, is important. He grounds the seminar in the realities of lived experience. He tells us that he drew a window on his cell wall with a ballpoint pen. During a break we talk outside. It’s clear that the opportunity to engage creatively with his past has been of tremendous benefit to him. But it’s not for everyone, he says. Not all prisoners are capable or willing to take responsibility for themselves.

‘Prisoner art’ is often seen as a separate genre, but in Clark’s show the prisoner perspective is meaningfully mediated. I leave the symposium with a reaffirmed belief in the power of socially engaged art.

For reviews of ‘In Place of Hate’ by writers on the a-n Writer Development Programme 2017-18, click here 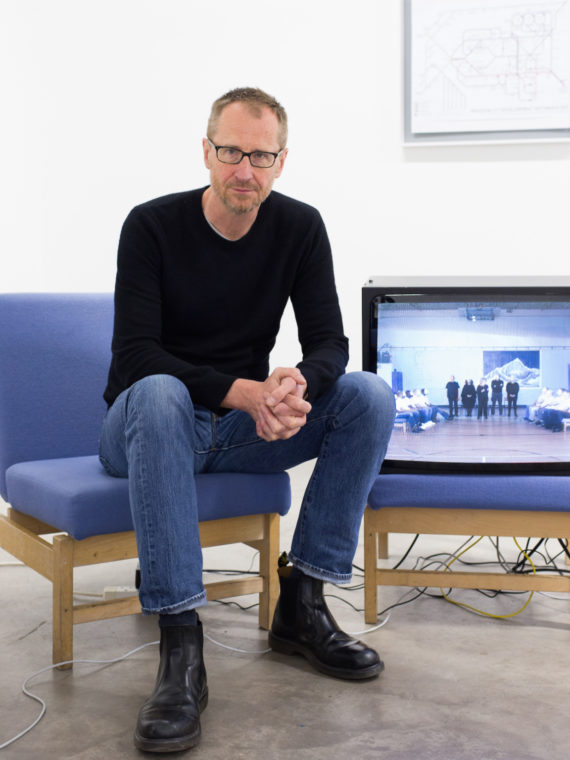 Carrie Foulkes is one of eight a-n members selected for the a-n Writer Development Programme 2017-18. For more information on the writer programme, and to read more of the latest cohort’s work, visit the 2017-18 programme’s blog on a-n.co.uk or use the a-n writer development programme 2017-18 tag