Art Party report: "We have to challenge the system itself" - a-n The Artists Information Company 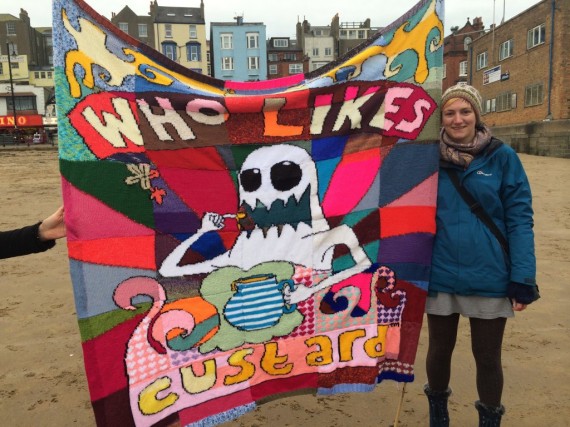 It started with a march along Scarborough’s sea front and ended with live music and DJ sets. In between, over a 1000 artists – including representatives from a-n and AIR – gathered at Scarborough Spa to discuss, debate and champion the role of art and artists in education and wider society.

Billed as an ‘antidote to all other conferences’, Saturday’s Art Party Conference was instigated by the artist Bob and Roberta Smith. After gathering at the town’s lifeboat station, the Art Party March worked its way up to Scarborough Spa for the conference’s ‘grand opening’ at 2pm. Homemade banners and placards featured the Secretary of State for Education, The Rt Hon Michael Gove MP, while artist Sam Venables created a special banner promoting AIR’s Paying Artists Campaign and bearing the defiant slogan: ‘Stand up for your practice’.

Helen Davies spent over a year producing her banner for the march. “Today is about bringing artists together and delivering the message that art isn’t just about economic gain,” she said. “Art has an important part to play in society – and art education is integral to that.”

Throughout the afternoon, a range of provocations were presented from ‘The Summit’, a banner and bunting-festooned stage specially created for the conference by Bob and Roberta Smith. Gove was repeatedly attacked for his attitude towards the teaching of art in schools. Leslie Butterworth, the general secretary of the National Society for Education in Art and Design, said: “Creativity will not bloom in a cultural desert. To borrow one of Bob’s phrases, we must make our own damn education.”

University of the Arts London student union president Shelley Asquith added: “We need to envisage a new radical art education. We have to be creative and challenge the system itself.”

Other provocations examined how artists themselves are valued within their own sector. Artist and AIR Council member Joseph Young presented Articulate to accumulate, an abstract provocation that weaved sound recordings from the earlier march together with quotes about fees for exhibition practice, in order to articulate the need for artists to get paid for their professional work. “Not paying artists is a breach of their human rights,” exclaimed Young. The audience roared its approval.

Susan Jones, Director of a-n, used the opportunity to focus on the need to create relationships rather than transactions with artists, suggesting that National Portfolio Organisations need to more transparent with their budgets. In her provocation, A feast for sore eyes, Jones led calls for other creative professionals to play their part: “There’s 19,000 visual arts professionals who are getting paid. How can the sector go about collectively creating more funds for artists? Is a grant fund for artists the answer?”

Elsewhere, stands and stalls showcased organisations from all over the country who are committed to supporting artists, the arts and education. These included the Art Fund, DACS, NSEAD, Sir John Cass Faculty of Art, University of Hull in Scarborough, Yorkshire Coast College, Axisweb, Yorkshire Sculpture Park, Artquest, CVAN, Chrysalis, Cape UK, and Artsadmin.

There were also several panel discussions. The issue of artists’ pay and education was again the focal point of the session, Why Is Art Important?, which featured artists Haroon Mirza and Jeff McMillan, the actor and director Samuel West, Index on Censorship head Julia Farrington and author and playwright Maureen Duffy.

In the session, What First Turned You Onto Art?, Cornelia Parker questioned whether the current funding system limits artists. “Artists need to be free,” she said. “There are often too many boxes to tick.” Jeremy Deller agreed: “It is up to artists to test what is acceptable and push boundaries.”

Recipients of a-n’s Art Party Go and see bursaries were also present, including Random Order, Black Dogs, Lincs Artists Forum, NOWNOW and Blueprint. Amelia Crouch of Black Dogs said: “Today has been a great opportunity to bring artists together and discuss how we can change things for the better. Meeting so many different organisations who are doing good work with artists is inspiring.”

The busy hustle and bustle of the event did not let up as the evening began. Around 100 artists came to a-n’s Stand up for Your Practice session, with lively chats and exchanges taking place. Topics discussed included the Paying artists campaign, what artists should charge and how to negotiate fees. AIR Council member Emily Speed also drew a-n’s Ecology of the Visual Arts map, which was distributed on the day and a popular talking point.

As the evening progressed a party atmosphere descended on the Spa. Haroon Mirza provided a DJ set and Bob and Roberta Smith performed with his band, The Ken Ardley Playboys. The marching that kicked off the Art Party earlier in the day gave way to dancing, and if Smith’s aim was to bring the visual arts community together, he certainly achieved this. Whether Westminster will take notice is, of course, another matter entirely.