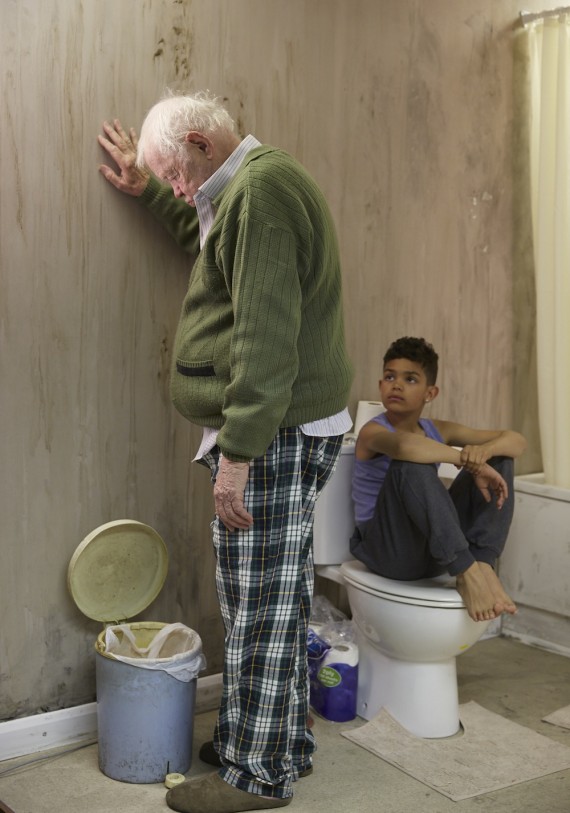 On a chilly summer evening, a small group of us sit huddled on a bench in the vicinity of the once-iconic, now truncated Archway Tower, a public square behind us, a private kitchen before our eyes. Headphones feed us a news story, the weather forecast and an update on local transport conditions as we voyeuristically observe an older man make his way around his kitchen, following a regular, but soon to be disrupted routine.

The kitchen is the first of three intimate stage-sets, nested within the soon to be demolished and largely empty Archway Mall, and forming the backdrop for Artangel‘s latest production, Have Your Circumstances Changed? This triptych of theatrical two-handers performed by older men and young boys has been devised and directed by Lu Kemp as part of a much larger collaborative process involving the actors, creative team and older men based in Islington.

Performed for a maximum audience of six to 18 members of the public in any given session, these tightly woven 15 minute-long vignettes each speak of loss, memory and isolation, raising questions about the changing experiences of ageing, care provision, family and gender experiences within the UK.

Kemp, a theatre director, dramaturg and associate artist for Inspector Sands theatre company, was approached by Artangel in what she describes as their unique ‘open process’ commissioning approach.  “It wasn’t a case of asking about my ideas and what they’d like to do,” says Kemp. “They just said: we want to work with you as an artist and the only thing we want to know at the moment is what group of people you are interested in collaborating with.”

Her response was to work with “either the very old or the very young”, and through conversations with Artangel they decided to set up a cookery school for older men. Led by chef-turned-actor, Paul Cawley, two seasons of the cookery school took place at St Luke’s Community Centre in Islington, with Age UK helping to find the men who wanted to learn how to cook or improve on basic skills.

The piece isn’t all about realism – there are a number of occurrences that could have been magicked from folklore, conjuring a modern-day fable in the process. We encounter real livestock, a never-ending nostril-hair and a jettisoned toenail, in a series of wryly comic actions that convey the confusions and discomforts of old age. Kemp talks of the creative process of working with the actors, Paul Humpoletz, Roddy Maude-Roxby and Dudley Sutton, who each brought their perspectives on ageing and the outside perceptions this brings with it.

“It’s not just my work, it’s led by me and conceived by me, but it is very much the result of a conversation between the creative team, between the people we collaborated with, between the extended community of the piece.”

Have Your Circumstances Changed? sits somewhere between theatre, dance and live art – a choreography of man and boy working together and around each other in an ambiguous relationship. Is the man aware of this companion who drifts in and out? Is he a figment of the imagination, a memory or perhaps the man’s own inner youth?

We wonder who the boy is to the man, and we get glimpses of who the man is to the boy. Caring, helpful, curious, impudent, careless, disgusted and aloof, the boy’s playful impudence a metaphor for the chaos caused by memory loss. Perhaps he is symbolic of the care worker, kindly or absently passing through, hastening to meet contracted hourly visiting targets.

At one point in the performance, the two performers are united in a shared act of investigation as they studiously dissect an onion on the kitchen table. This could be a grandfather and grandson – protective eye-wear and nose-clips at the ready – testing out a science experiment in the safety of a home workspace. The precarity of this rather more frustrating enquiry is brought home as the careful, but odd, dissections become an altogether more distressing and frantic action, both young and old struggling to fully comprehend the task in hand.

The project was, in part, influenced by Kemp’s own family experience. Following her father’s death, which left her mother facing a huge learning curve in terms of the financial accounts, Kemp turned to thinking what would have happened had the situation been reversed.

“Because he was of a very particular generation, all of the basic caring was done by my mum,” she says. “It’s true of a lot of older men. He literally wouldn’t have been able to cook an egg. I think women are very present in the piece because they are absent, and I thought it was really interesting to look at men caring for men in a version of care between the young and the old.”

This longterm impact of gendered roles on the older generation alongside increasingly diminished social care provision are at the source of the piece. “For me the two are inextricably linked at the moment, simply because a lot of the decisions around care are made by men, still, and yet care is largely given by women,” says Kemp. “Unless we work in a more socially-engaged way then people are going to be left out to dry. We need to have a system that ensures the well-being of everybody.”

There is something to be said for site-specific outdoor theatre experiences – pitting the viewer against the whim of the weather as they inevitably do. As we, the audience move through the three episodes and the three stage sets, our own relationship with the chance weather conditions provides potential for a sympathetic connection with the physical challenges experienced by the three men.

“People [are now] having to make sure that their own older lives are catered for well in advance,” says Kemp, “and of course we’re all at the call of chance.”