Artist tour guides in Edinburgh: "We could end up getting lost" - a-n The Artists Information Company 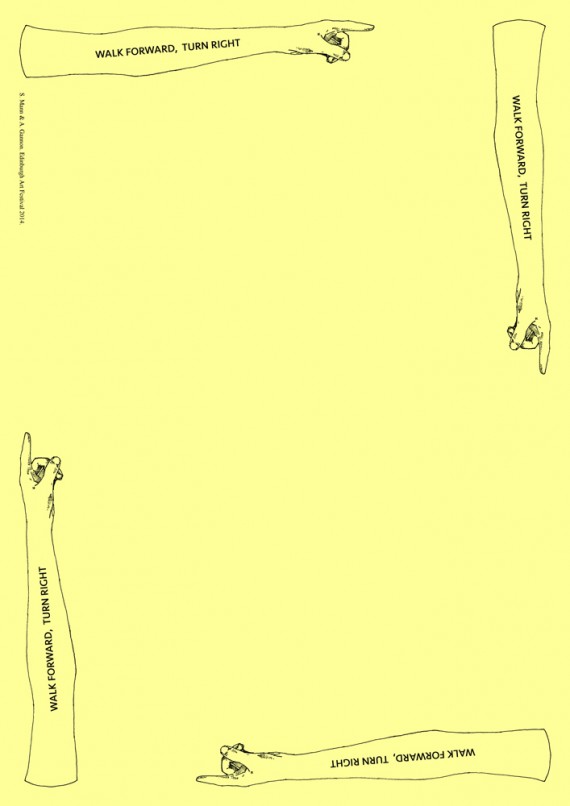 Andrew Gannon and Stephanie Mann have a pleasingly unconventional approach to being tour guides. “We want to break down levels of communication,” explains Gannon, “leave the content open-ended, challenge what a tour can be.”

The Edinburgh-based artists are this year’s Edinburgh Art Festival tourists-in-residence, an annual commission since 2012 that involves developing new works around the theme of a tour.

“We have four tours planned,” explains Gannon, “the first being a limited edition print that explores the thematic. The others will be physical happenings entirely reliant on participation. Our first physical tour will see myself being gagged and Steph blindfolded.”

A large part of this year’s EAF programme is also in Generation, the Scotland-wide celebration of the last 25 years of Scottish art. Because of this, the festival itself seems less about new exhibitions and more defined by the durational aspects of commissions, performances and tours such as Gannon’s and Mann’s.

EAF has consistently surprised with its ability to query how local emerging artists are represented, and the 2014 edition features more local artists than previously. Many of these have been co-commissioned with Talbot Rice Gallery for Counterpoint, an exhibition featuring eight Scottish artists with a focus on technology, utopia and the Scottish Referendum. The show includes additional performances by Jeans + MacDonald, Ortonandon and Alexa Hare – all artists who contribute readily to Edinburgh’s visual arts community.

“I am looking forward to Michelle Hannah’s new film at Talbot Rice,” says Mann. “I know her practice well and the gallery are very supportive of the artists they commission. This is my approach to EAF – to see the work of artists I want to support. We have already seen the Generation exhibitions – it’s programmes showing new work, like Counterpoint, that we’re excited about.”

Inverleith House’s EAF exhibition by the German artist Isa Genzken opened on 19 July. It brings the work of an international, established artist to the city, enabling new audiences to create a lasting connection with the work. Will, I wonder, the tourists-in-residence artists be including a visit to it on any of their tours?

“The content of the tours is not limited,” explains Mann. “What happens relies entirely on who joins in. We could even end up getting lost. It’s more about exploring Edinburgh itself, a sort of guide to navigating the city, to avoid tourist congestion. If we end up visiting festival exhibitions then so be it.”

One space on the periphery of ‘tourist congestion’ is Edinburgh Sculpture Workshop (ESW). Its EAF show, Icaro Menippus x 2, is an exhibition of reconstructed work of the late Edinburgh College of Art (ECA) tutor Paul Carter (1970-2006).

“Both Steph and myself undertook our MFAs at ECA and, although before our time, Carter was an influential teacher there,” explains Gannon. “It’s where we first became aware of one another’s work, and the reason we have found our collaboration so rewarding. It will be interesting to see Carter’s work relived.”

Gannon continues: “I am also looking forward to Craig Coulthard’s commissioned film installation, The Drummer and the Drone, at Trinity Apse. It’s refreshing to see how EAF’s commissions generate space for artists to extend their practice. Steph and myself have certainly experienced this.”

A deliberately ambiguous commentary on Scottish cultural history, Coulthard’s film could well touch on issues and ideas that many visitors to the festival will be battling with: the forthcoming referendum, yes or no, why and why not? In fact it’s hard not to read this year’s EAF programme as politicised, whether the artists’ work displays undertones or not. Maybe the tourists-in-residence collaboration will take us as far as we want to go.