Artists' Books #1: 'The Octopus Would Like To Put a Stop To Us' by Otto - a-n The Artists Information Company 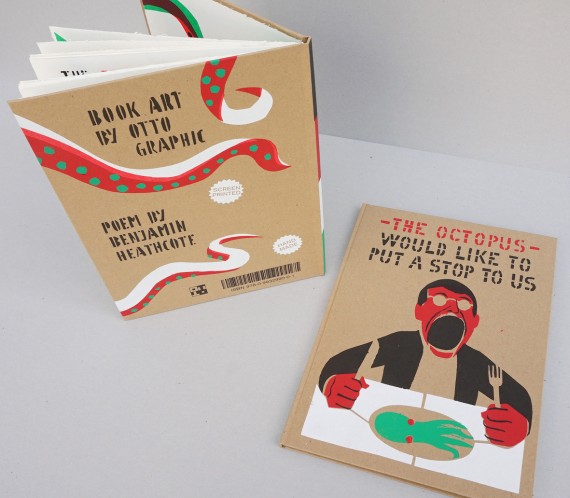 Bath-based illustrator Otto is perhaps best known for his work on political and economic subjects for national newspapers and magazines. His style is influenced by Polish and Russian Constructivist graphic imagery; solid lines, flat colours and photomontage-type images. 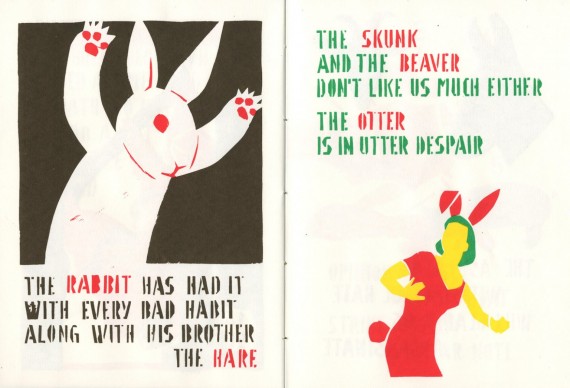 But Otto is also popular in the field of artists’ books – since 1996 he has been creating satirical publications deploying his ingenious multi-layered screenprint designs. Whether the subject matter is reckless money lending, rampant consumerism, or humans destroying the planet, Otto can deliver a complicated visual narrative using just two or three colours.

Otto’s practice is unusual in that, as an artist, he commissions writers to produce texts for him to use in his books – rather than the traditional route of a publisher paying an artist to illustrate the author’s text.

It’s a complete role reversal of his ‘day job’ as an illustrator. In his latest book, The Octopus Would Like To Put a Stop To Us, the poet Benjamin Heathcote’s text is a foil for Otto’s bold imagery depicting animals that have had enough of us killing, eating, polluting and destroying their habitats.

Bats, monkeys, otters, zebras and elephants (as well as the giant octopus that unfolds in the middle) are all out for total revenge on the human race. Turkeys plan to start a human farm for Christmas and the Orangutans have pencilled in their afternoon strangling sessions. The use of scale is impressive – a huge white hare looms over a screaming ‘bunny girl’ in a parody of 1950s horror movie posters.

The text and images were first stencil-painted by Otto, in homage to ‘Rosta’ posters by artists such as Vladimir Mayakovsky, used to convey news quickly in early 20th century communist Russia. Otto’s screenprinted version has kept the bold, urgent style of these messages – so pay attention, you have been warned…

The Octopus Would Like To Put a Stop To Us, images and production by ottoGraphic, poem by Benjamin Heathcote. Published 2015 by Otto, hardback, screenprinted by the artist at Marshfield Print Studio, 30 pages, 22x29cm.