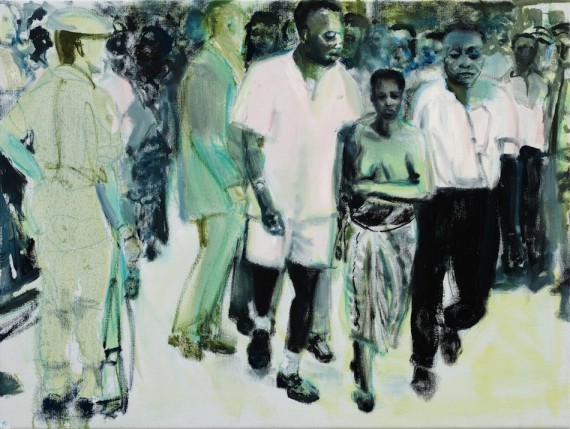 The Marlene Dumas exhibition at Tate Modern, The Image as Burden, has attracted a wealth of reviews and critical writing since it opened a month ago, including on a-n.co.uk. Featured in the a-n News Now Showing slot in its first week, it has also been covered in Reviews and Blogs.

In Tom Hackett’s vividly articulate review, he recalls his first encounter with Dumas’ work back in 2001: “As a bloke staring up close and personal at cocks, cracks and arseholes I was given plenty to think about beyond their quality of mark,” he writes.

“It was a sublime painterly exposition of the ‘male gaze’ and my maleness plonked me slap bang in the discourse. To write at this juncture using the biological terms of penis, vagina and anus would seem, while correct, to miss the point.”

This opener to the review brings the reader to Hackett’s core reaction. Dumas is, it would seem, a painter’s painter and he reminds us that beyond the narrative content, there is a distinct mastery of this medium.

“This ability to disarm, and dislocate the viewer via the activation of mixed visual codes dominates this show at Tate Modern,” he continues. “Marlene Dumas achieves this in a highly articulated range of strategies. Powerful, political depictions of black Africans are just one of the core things she tackles, but let’s start with the works as painting.

“With many of the works in this impressive body there is an effortless oscillation between demonstrations of highly-skilled representation to wonderfully clunky and miss-shaped daubs of crude painting.”

In her review, Sheila de Rosa is interested in what Dumas does to her ‘sitters’ – in the characters and subconscious narratives that are evoked. Through these portrayals, de Rosa clearly sees the persona of the artist and wonders what kind of individual would create such portraits.

“Throughout this excellent exhibition I could feel the personality of the artist becoming more present as I followed her works through the rooms,” she writes. “I wanted to know more about her, she was an ephemeral presence that I needed to pin down…

“This is an impressive show about human frailty and could not have been accomplished by a super-ego.  Dumas can handle scale from the very big to the miniature (the Amy Winehouse picture is small but very powerful). She has her own instantly recognizable style which I envy and crave to copy. Technically she’s a virtuoso – she really can draw and paint.”

Writing from an artist’s perspective, de Rosa refutes Waldemar Januszczak’s critique of Dumas’ work as a clumsy combination of the old-fashioned with contemporary foibles. Referencing John Berger’s assertion that “perhaps one needs to be a painter rather than a scholar to perceive it clearly”, de Rosa states:

“This is where I humbly suggest that you need to be a practitioner yourself to appreciate exactly what she has achieved in her works and just how accomplished she is, and what a joy they impart. Marlene Dumas is a breath of fresh air and her work combines both conceptual acuity and visual pleasure which, I submit, is what the visual arts are all about.”

Taking a more conversational and lyrical approach, a-n blogger Flora Dent shares her train of thought and those of other audience members she overhears while wondering through the Dumas exhibition. These reflections convey the manner in which an artwork can invite philosophical enquiry, personal introspection and a reflection on social conventions and their implications.

“There’s a tour group. He speaks and it reaches them via earphones. How modern. Tate. The suited crowd, an office outing? can wander as they please and still be a part of the tour. It also mutes the children. It’s half term this time. Dumas, a living artist, made heavy contributions to the show, and this is evident in the wit of the show. Going back to Rejects, for example, an Alsatian is pinned amongst the crowd.”

Dent’s blog post shares the enjoyment of visiting an exhibition, along with a collection of information that pieces together the impetus and political decisions behind Dumas’ imagery. Referencing a Dumas interview by Yuko Hasegawa that discusses her paintings within the context of colonialism and power structures, Dent presents the problematic question of who paints whom and why.

She concludes: “It was a book that got Dumas started on the Black Drawings 1991-2 – a collection of European photographs that had been used as postcards showing Africa from the beginning of the last century. These photographs showed the way European colonists looked at Africans, how the Western world portrayed the black body – ‘how this has changed…’”

Marlene Dumas: The Image as Burden, until 10 May 2015, Tate Modern, London. www.tate.org.uk

These extracts are drawn from writing self-published by a-n members on our active Blogs and Reviews sections.