To mark ten years of the Artist’s Resale Right, the Design and Artists Copyright Society (DACS) has published a white paper presenting key facts and figures about the scheme.

Ten Years of the Artist’s Resale Right: Giving Artists Their Fair Share presents ARR as one of the most important pieces of legislation introduced in modern times supporting the livelihoods of visual artists, and demonstrates that despite the fears of many in the UK art market that it would have a negative impact on sales, this has not proved to be the case.

ARR provides a royalty for artists and artists’ estates whenever their work is resold by an auctioneer, dealer or gallery for €1,000 or more; DACS collects and distributes approximately 90% of these royalties in the UK.

ARR was introduced in the UK on 13 February 2006 following years of campaigning and lobbying by artists and the arts community. While initially it was only living artists that benefitted, in 2012 ARR also began to be distributed to artists’ estates. To date it has seen £46.9 million of royalties distributed to more than 3,900 artists and their estates. 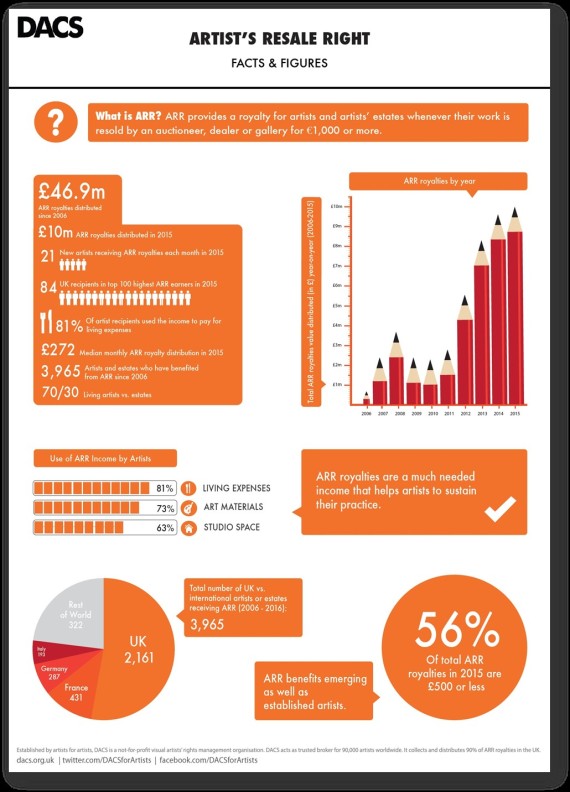 The white paper shows that the royalties distributed have been steadily increasing since the scheme was first introduced, when under £1million was distributed. In 2015 more than £10 million was shared by over 1,500 artists, with DACS forecasting that this revenue is set to increase again in 2016.

UK artists are the greatest beneficiaries of the scheme, with 2,161 UK artists benefitting out of a total of 3,965 over the ten-year period. While it might be expected that established artists benefit most from the royalties – the average age of artists who have received ARR payments is 63 – the paper notes that 56% of payments in 2015 were for £500 or less, suggesting that emerging artists are also benefitting from the scheme.

Quoted in the white paper, artist Stuart Semple says: “How incredible it is to think that we have been enjoying the Artist’s Resale Right here in the UK for a decade.

“ARR gives financial recognition to the artist for their contribution to a wider market so we must not take them for granted. Artist’s Resale Right – and its extension to artists’ estates –was hard won and faces constant threat. We must celebrate its existence as widely as possible.”

Jeremy Deller adds: “It’s important for artists to benefit from the sale of their work. A lot of people do very well out of the art market and obviously the artists aren’t always the ones doing that.”

Speaking about the tenth anniversary, DACS Chief Executive Gilane Tawadros, said: “ARR has had a phenomenal impact on artists and estates. At a time when funding for artists is becoming scarcer, ARR ensures that artists receive fair compensation when their work is resold.

“Celebrating the ARR tenth anniversary is an important milestone, not least because it has also provided estates invaluable support towards managing an artist’s legacy. ARR is a critical cornerstone of Britain’s cultural sustainability.”