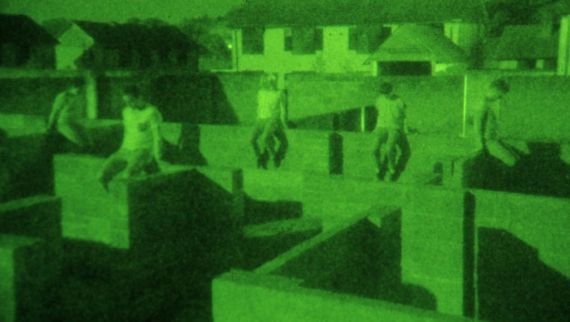 In Southampton City Art Gallery, you can sit in a darkened room for three hours, watching a Benedictine monk as he works. Father Nicholas Spencer, of Quarr Abbey on the Isle of Wight, is slowly, methodically, mesmerisingly re-binding a 1903 first edition of the novel L’Oblat. This meditative film accumulates strength through fine detail – the heat haze rising from the brazier, the faint satisfying clunk as each individual letter is hand-pressed into the red leather cover, the monk’s heavy breathing at the effort it takes to impress the leather.

In The Oblate, by Jeremy Millar, each task is one of contemplation and mindfulness. It is quite beautiful, every scene carefully framed using a fixed camera, with a soundtrack that is as rich and clear as the ancient Abbey bell it records.

In another room, there is work of a completely different nature. Bouke de Vries has made Memory Vessels, using a series of broken ceramic fragments from the Southampton City Council Museum Collections. A trained restorer, he has understood their original shapes, recreating them in clear glass, within which he has artfully arranged, and sometimes integrated, the broken ceramic pieces.

Beautiful in a different way, they reference archaeology, history and craft. Like Millar’s film, they also repay intense looking. Curator Judy Adam is in awe of his skill. “If you had a broken Ming vase, you could give it to Bouke to restore,” she says admiringly.

These are just two of the ten newly commissioned artworks from the ArtSOUTH initiative, a contemporary visual art project that opened on 7 September and runs to 1 December. The project is curated by Adam, and comes out of a partnership of 15 organisations based in the central south of the country, including Aspex Gallery, John Hansard Gallery, five local authorities, three universities, and Mottisfont, a National Trust property.

Largely funded by Arts Council England, Hampshire County Council and Artswork (with other contributions from the partners), these new works are installed in a range of venues across Hampshire, the Isle of Wight, Portsmouth, Winchester and Bournemouth. Over the three months of presentation, they are accompanied by a comprehensive events programme, including a schools project, artist talks, workshops and the ArtSOUTH: Collaborations Conference on 25 October at the Winchester Discovery Centre.

The partners hope that by pooling resources and sharing expertise, the arts infrastructure and offer to audiences will be supported, not just for this project but into the future. “One of the aims,” says Jo Montague, Planning and Partnerships Manager at Hampshire County Council, “is to support the existing visual art infrastructure in the Hampshire area and to raise the profile of contemporary visual art. Many of the organisations have not worked together before, and it enables artists to exhibit and work in partnership with organisations they may not ordinarily have the chance to work with.”

The project is part of Hampshire Council’s visual arts strategy – with a remit “to enhance our quality of place, and enable an innovative, high quality cultural offer of national standing that involves and inspires.” It is also overtly part of the place-making and cultural tourism agendas. “We want to attract an arts and cultural tourism audience, engage new audiences, and encourage them to visit different ArtSOUTH exhibitions across the region,” says Montague.

As curator, Adam understands this overarching strategy but has ensured that her role is arts-led. “It is very much about encouraging people to go to places they haven’t been before,” she says, “but my starting point would never be cultural tourism. What we do has got to be good, and my job is to support that. The standard of the outcomes is very high, and that’s because of the standard of the artists, who have all taken it very seriously. The strength of the collaborations has really energised everyone.”

One of the more unusual collaborations is Close Protection, a three-screen video installation, made by artist Graham Gussin, which involved working with The New Movement Collective – a choreographers’ collective – and the British Army. “I wanted to make a film using night vision cameras,” explains Gussin, “and I knew the army had high-end equipment. I’d been working with the Siobhan Davies Studios and I thought about the phrase ‘the choreography of war’. There’s movement in the field of war, and there is movement on a stage. I thought the dancers would respond to it.”

Working at the Longmoor Base in Hampshire – “a place usually associated with warfare and violence” – the army has filmed the choreographed performance that responds to and references army training drills, using night vision cameras. It’s an eerie and haunting piece of work.

ArtSOUTH is an unusual entity. It’s hard to classify what genre of visual art presentation it fits. With a budget of around £250,000, it is too geographically spread to constitute a festival, with not quite enough critical mass to be a major regional visual art event. It aspires to be national and international but is a long way from art biennial status. What holds it together, though, is the unusual production process and the desire to “reveal the region” differently to visitors, through their experience of the artworks.

“There were so many open submissions that there had to be some way of giving it its own personality,” explains Adams. “We divided the region into four areas with lead partners and asked for artist-led proposals that would collaborate with another field or discipline, and to suggest a type of place or context. The partners then chose who they felt would fit well with them.”

For John Hansard Gallery, an installation of four films by Mel Brimfield, two of which are new commissions, was sufficiently different from their usual programme to inspire their interest. The new films – Miss Jones (think Bridget Jones aged 60 meets ‘70s spinster) and Not I (a verbal tour-de-force from actor David Cann) – are grounded in the work of Samuel Beckett.

Also showing is Brimfield’s Clement Greenberg – Lee Krasner = Jackson Pollock, from 2011, a work of writing and performing genius if ever there was one. Revealing the inherently sexist art world of the 1940s and 1950s, Krasner is repeatedly undermined while passive-aggressively portraying Pollock with all the characteristics of an unintelligent mongrel. It’s a rare treat to see all four distinctly idiosyncratic films in one venue. Another highlight is Resuscitare by Elpida Hadzi-Vasileva, a monumental and majestic sculpture that vertically repositions five fallen trees, roots skyward, within an existing circle of beech trees at Mottisfont.

“There were 180 proposals,” says Adam, “and so many that we wanted to do but couldn’t.” Is there a chance that this new commissions programme could be repeated? “Well,” she says, slightly wistfully, “it’s for the steering group to decide if it happens again.” Unspoken between us, is the knowledge that this would be a big task in existing conditions – and that the current commissions are quite an achievement already.